I’ve been past Hua Hin on the bus and on the train a few times, always at night. Usually there’d be a brief stop to drop people off or pick them up; so my impressions were generally fatigued, blurry and in darkness. I’ve flown over the beach resort as well, an entirely different perspective and one with a subsonic, high altitude detachment. The sweep of the coast on both sides of the Thai isthmus; the Gulf of Thailand on one side, the Andaman Sea on the other always looks impressive. Here at Prachuap Khiri Khan Province, Thailand is officially at its narrowest, just 11kms wide, though the tapering strip of coast near Koh Kong along the border with Cambodia probably is narrower and, as it’s largely illegal Thai territory, a land grab, at least according to the Cambodians, goes unacknowledged.

Hua Hin is 2 hours by road south of Bangkok. It occupies a strip of beach along Thailand’s 1660km long coast of the eponymous gulf and has palm trees and sand, as you’d expect. Weekends and public holidays it’s busier. It’s reached on Route 4 (Phet Kasem Road) which splits from the main Highway 37 at a spaghetti junction towards the coast and follows the rail line south. Hua Hin is a resort for Thais fleeing the capital; its smog, congestion and heat of the world’s official “hottest capital”. Hua Hin is a royal town. Kings Rama VI and VII built summer palaces there. The late king, Rama IX, occupied his official residence, the Phra Ratchawang Klai Kangwon (“Far from Worries Palace”) during his later years. It’s the town of the Thai queen, her colours are sky blue, the king a regal yellow. 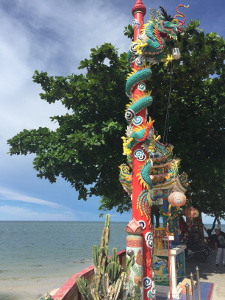 Hua Hin took off as a holiday spot from 1911, after the railroad charge (the British followed the Germans and the Danes) and the royal family built their vacation homes. By the mid-1920s it was a full-fledged resort town for the Bangkok-based nobility with a golf course and a seaside hotel run by European restauranteurs. If you look closely, you can still see retro postcards of the era advertising the beach at Hua Hin occasionally for sale in Bangkok markets and some galleries.

In 1941, Japanese forces landed near Hua Hin. They went on to rout the British Empire in what was then Malaya. There the British surrendered moral authority over their empire, a feat the Japanese achieved using the bicycle; and capturing 90,000 Allied soldiers at Singapore, where the British lost military authority (their worst ever military capitulation), despite the Japanese having next-to-no ammunition (though to be fair, the British and their allies didn’t know that at the time).

Thailand was then ruled by a self-proclaimed field marshal nicknamed “Phibul” the fascist leader of Thailand and admirer of Mussolini, who had seized power in the Songsuradet rebellion of 1939, or the “Rebellion of 18 Corpses”. Phibul or Phibun, was an engineer by training (in Germany) and built a lot of railways (in Thailand). Bangkok was a hotbed of espionage before and after the war but the country remained “neutral” during World War II, which for the Thais has meant over years allying themselves with whoever is the predominant force of the time. However, this didn’t save thousands of Thais from enslavement and death at the hands of the Japanese. Somewhat fittingly, Phibul was later ousted also by military coup and died in exile in Japan. What goes around comes around.

There’s a lot of money swirling around Hua Hin these days, mainly in property development, as Bangkokians buy condominiums. The golden rule of thumb seems have a beach build a tower block, though Hua Hin seems to have been saved the worst of the reckless development often seen hereabouts. It also has ample budget digs available by the night, the week, the month, or even by the hour. Seafood is plentiful as you’d expect being adjacent the food bowl of the now overfished Gulf, but is still cheap.

Getting to the beach at Hua Hin from Bangkok can be a lot less hassle than to the country’s much-vaunted southern islands. There are transitory tourists. Few in number compared with the overcrowded stamping grounds that are Thailand’s numerous beach resorts saturated with backpackers and package holidayers. It has a small semi-permanent expat population. Not the usual “jailbreak crew” of expats seen in Pattaya and in some other Thai towns. They seem more genteel in keeping with the general feel of the place. A welcome relief all round.

At the Singkhon Pass in Mueang district there is a border crossing into Burma. This makes the area a favoured route for expats on the “visa run”. A whole cottage industry has built up around visa runs from around Thailand where expats congregate. A visa run is where they cross the border to a neighbouring country for a day or an hour, renew the visa and come back again. The vagaries of the Thai visa situation however, make this option a moving feast. For some this means raising themselves from an alcohol induced slumber, spending a day in a cab for a flat fee, usually while asleep, getting their passport stamped and sleeping on the return leg. That night they’re back on the drink. Easy.

Everything in Hua Hin is low key and small scale but then I’d just come from Bangkok, officially Southeast Asia’s third biggest city (unofficially who knows), and infamous for its crowds and traffic. If you’re looking for a quiet bolt hole this would be one. If you get fed-up with Hua Hin you can go further south to Prachuap Khiri Khan City (Prajuap Kiri Kan, and usually just referred to as Prajuap) the “city of Mountains” and even quieter. You may get bored here, who knows.

With a resident population of just over 60,000 Hua Hin seemed half asleep. The town is an oasis from the frenzy of the main highway south to Hat Yai, the Muslim south, and Malaysia. From Bangkok I went by taxi. The road to the south is a dual carriageway with three lanes in each direction lined with roadside furniture. The roads in Thailand are the most lethal on the planet bar those in Libya, which is at war. Thais like to drive fast, travel as close to other vehicles as possible, often while distracted. Toyota is the vehicle of choice for most. The Vigo, or Hilux pick-up, mini vans, and the ubiquitous Corolla. Thais often become debt-ridden to own these Japanese status symbols. Added to the mix is most freight in Thailand goes by road carried on trucks powered by stacks of liquid petroleum gas, and highly combustible. Hiace minivans travel at high speed often in mini convoys, undertaking and overtaking traffic in equal measure, with barely a vehicle length to spare. If it wasn’t so scary, it’d be breath-taking.

Last year, Bangkok was the second most popular city on Earth – over 21 million people visited, or presumably used the airport. Whether they actually stayed is another matter. Where ever they go it appears not to be Hua Hin. They appear not to turn up in many places in Thailand either. So quite where they do go can be a mystery.

Hua Hin is gateway to southern Thailand, an altogether different country. The majority Muslim provinces are where a separatist movement to create an Islamic Pattani Darrusalam encompassing Thailand’s four southernmost provinces often spills into open violence. The Anglo-Siamese Treaty of 1909 established the present-day border with Muslim-majority Malaysia and these areas have more in common culturally with Malays than they do with Thais. Since the 1930s, the process of “Thai-ification” began, aimed at creating a cohesive sense of national identity by homogenising social and cultural practices but this alienated southern Muslims. Violence ramped up from 2004 and the rule of the first Sinawatra prime minister, so the all-pervasive Thai military maintain up to 60,000 troops to keep everyone quiet.

Hua Hin is the bottleneck that squeezes the south controlling land access to and from the troubled region. The 12-year conflict in the south has killed more than 6,000 people, but has never targeted tourists, that was until 2016 when a series of bomb blasts struck across Thailand including 4 such blasts in Hua Hin over a 24-hour period, killing 1 and injuring 23, mainly tourists. It was the first time in Thailand tourists had ever become targets.

Thai towns tend to be largely unappealing from an architecture perspective. They lack the charm of parts of the former French Indo-China. The traditional wooden shop houses have all but gone, replaced by concrete lacking charm and character, and which suffers from the perpetual heat and damp leaving the render squalid shades of grey all moving towards black. It can be said much of modern Thailand has none of the appeal of old-world charm, but many disadvantages of rapid urbanisation in a country that is still predominantly rural in nature.

Given the role of rail in the development of Hua Hin it’s fitting that the railway station is a gem. Built in the reign of Rama VI, it’s one of Thailand’s oldest and stations noted for its unusual architecture, complete with resplendent royal waiting room relocated from Nakhon Pathom Province (west of Bangkok) for the purpose. Rama VI had his summer seaside palace built in Hua Hin in 1923, and is usually referred to as “the palace of love and hope” of the kingdom’ oldest palaces. At Khao Tao there is a bay with a load of seafood restaurants. Overlooking the village is an assortment of Buddha statues, some in a cave, and more along the shoreline. Some date back centuries. Near Hua Hin are temple mounts, golden spires on bush covered clifftops, some with 400 steps to the top.

Less traditional attractions, depending on your point of view, near Hua Hin are vineyards, making wine for the Siam Winery with labels such as Monsoon Valley; and a sheep farm Swiss named. I can only imagine an animal covered in wool fleece must suffer in the tropical heat like few others. Near the Myanmar border are the Pala-U waterfalls. Natural features in these parts attract a variety of vendors and usually charge for looking at something provided by nature for free. Foreigners, barangs, usually get stiffed more.

Hua Hin seems to be neither town, city nor village. It has shopping centres, expensive hotels, and tower block apartments. It has cafes, most of which seemed closed all day, and large seafood restaurants with no customers. It has nightlife of sorts, cafes and bars where there are “lady drinks” and sound systems compete in close proximity with ear-splitting, conversation stifling decibels. It might be alright for a weekend but I’m not sure I’d want to live here.