Mondulkiri is one of the more remote parts of Cambodia, only bettered by its northern near neighbour, Ratanakiri (or Ratanak Kiri). It’s rural, the country’s largest province and the most sparsely populated having just one town, which has barely 7,000 people. Politically, it’s a fairly new entity having been carved off neighbouring Kratie Province, to the west in 1961. To the east it borders Vietnam, where it touches the southern reaches of Tây Nguyên, known as the southern or central highlands, that country’s physical spine.

The road from Phnom Penh to Sen Monorom (or Senmonorom) , Mondulkiri’s capital, is marked with signs to the border with Vietnam, advertising hoardings, mainly for beer and politicians. The beer comes mainly in the colour red, and politics in blue; the ruling party having moved from sky blue to the medium shade of the opposition. Some may call that subtle undermining of the democratic process. Both sides of the border share similarities of ethnic hill tribe minorities, distinct and often at odds over the centuries with the lowland regimes. Here is the Khmer Leou or Montagnard, the collective name given to the various indigenous ethnic groups of Cambodia's highlands. This is a region and people apart. Tourism is relatively new, burgeoning, and outsiders not always welcome. To know the past is to understand why. 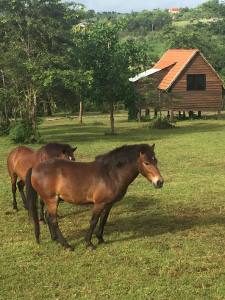 The recent history has been violent, some of it on a scale not seen in human history. During the First Indochina War, against the French, the region was heavily infiltrated with Viet Minh, the People’s Army of Vietnam, who along with the later National Liberation Front or Viet Cong, sought refuge along Cambodia's porous border, in what was arguably the single most important development in the Indochina conflict for Cambodia.

The north-eastern area of Cambodia played a significant part in the genesis of the Khmer Rouge as firstly a political and then later, thanks largely to the massive bombings wrought on Cambodia by the Americans, a military force, as those displaced swelled the ranks of the black-suited rebels. Anti-government dissidents escaped to Mondulkiri to get away from Norodom Sihanouk’s security forces-he had coined the term Khmers Rouges, “Red” Khmers to denote their political affinity- already ruthless, and well-practised in the dark arts of disappearing people. The remoteness and the mountains of Mondulkiri and also Ratanakiri provided a safe haven for many as political opposition ceased to be possible in any form, and for Cambodian communists closer proximity to the support offered by the Vietnamese, before the former took power and turned on the other; the pupil resenting the master.

During the Second Indochina War Cambodia's eastern land was heavily bombed by the US air force literally thousands of times a day. Many of the people were displaced as a result, only able to return decades later. Others joined the ranks of the opposition in Cambodia, and some the Khmer Rouge. The legacy of war, unexploded ordnance, remains as a daily and constant reminder. There are almost daily maimings and deaths, and land has been left with bomb craters some big enough to swallow a herd of elephants as was recently the case.

During the 19th century, the ethnic hill tribes of Mondulkiri were used as slaves in the lowlands and formed part of Phnom Penh’s population at the time of French Protectorate. History moves in cycles. Today, the lowland regime plunders the province for its rich harvest of timber and gems. Here in Mondulkiri the Pnong people dominant. Various dialects are spoken on both sides of the border. Many locals have now been dispossessed, their land gone, the trees felled, the land cleared, and work is labouring on vast plantations owned by outsiders. Pepper for example, seems to be grown by Sela Pepper Company Limited of Phnom Penh or by Welt Bio Limited, a subsidiary of a Korean confectionary giant, both with farms sprawling for hundreds of hectares. Deforestation and habitat loss is threatening or destroying the eco-system; and some of the ancient ways of life with it, like the array of traditional medicine gathered in the forests; impportant in a nation with poor access to more orthodox healthcare. 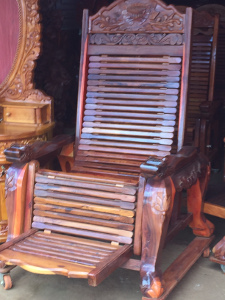 The landscape of Mondulkiri from the road is comprised soft greens contrasted with the reddish soil. They grow many things; pepper, avocado, passionfruit, rubber, coffee, and probably lots of other things officialdom doesn’t know about, turns a blind eye to, or, has a finger in the pie. Once, it was covered in forest, rich tropical hardwoods worth a fortune but now the trees are fast disappeared. Much of it seems to be for sale by the roadside as kindling, derived from much more mature timber. Much of the exotic wood has been illegally felled, often with the knowledge if not downright connivance of the very authorities tasked with protecting it. Trucks can sometimes be seen with large trunks, sometimes as already processed timber. Some bear the marking of the military. Motorbikes carry sawn logs defying gravity, or tow trailers with impossible loads.

Sen Monorom has been referred to as being a frontier town, the proverbial Wild East. At several hundred metres above sea level it’s cool, especially at night. To say it’s a one-horse town isn’t far off the mark. There are few guesthouses, not many restaurants and few paved roads. What tarmac there is soon runs out near town leaving everything covered in a coating of red dust; vehicles, houses, vegetation, and sometimes, even the people. There are many tailors, mechanical repair shops probably doing a thriving business repairing vehicles shaken to bits from unsealed roads. The red-dirt streets around the markets are lined with phone shops, and shops selling the most ornate hardwood furniture, some of it literally weighing a tonne, and leaving you wondering where all that wood has come from. It’s an open secret that the wood used in building Beijing’s Olympic facilities such as cycling’s velodrome, was done with wood illegally taken from this region. Smuggling across the border with Vietnam is an almost daily occurrence.

Near the market street is the Mondulkiri Coffee Company (MK) outlet with a side line in honey and in tea. Prices are the same as those in the supermarkets in Phnom Penh, so it’s no cheaper at source. Next door the MK Coffee shop - the only one in town - wouldn’t look out of place in any High Street anywhere, or look out of place in any international airport terminal. The staff told me that here in this most non-tourist like of places, Chinese and Koreans often stop and order their coffee. As neither national group generally go much in for independent travel I assume they must mean the stop by the busload, safety in numbers. 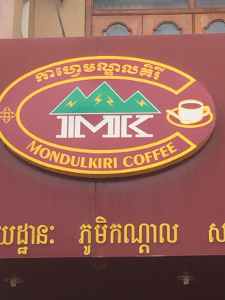 My first stay was a nature resort where they’d turned the water off. For breakfast there was no toaster, so seemingly nothing with bread was on offer. The tranquillity of the property devoid of electronica like television was shattered at night by the boom-boom bass from the restaurant thumping through all the bungalows. For company there were the hotel cows, and a curious breed of horse, not quite Shetland proportions but not large either. The attraction was that there are no attractions save for trekking which appeals to some, and nature which appeals to others. Elephant watching, though not touching, seems to fill the middle ground in terms of popularity with some embracing it and others giving it a wide berth for ethical reasons. One Australian woman was looking forward to a 25km jungle trek having left her daughter at the beach.

The area is famous for its elephant population, most now living in forest sanctuaries. Of the estimated 83 captive elephants in Cambodia, some 50-odd of these are in the Mondulkiri, about one-fifth of the population left in Cambodia according to some sources. Elephants were once widespread and used for work and warfare, and are strongly symbolic throughout the entire region.

My guesthouse in Sem Monorom changed $100 but then couldn’t seem to muster change for 10,000 riel (about $2.50). Down the main road was a large eucalyptus tree which looked as out of place in town as the Norfolk pine two streets away at the back of the pizza parlour with a coffee shack out front and two dazed looking backpackers staring blankly into space.

The town had signs for the ‘Clean Town’ award. I thought this something special, but I’ve noticed many Cambodian towns now have these. True, it had a few roadside rubbish bins, the kind fashioned from tyres, pot-bellied in style, though no one seemed to take the time to empty any. The main road is on a crest with a raised median strip lined with battered vehicles and bench seats occupied by curious locals, under-employment being a chronic issue. The fired chicken joint next door to the Avocado guesthouse seemed the busiest restaurant in town.

You don’t go to Sen Monorom for the night life. You may go to Mondulkiri for the trekking, but you may want to hurry. Once one of the world's most forest endowed countries, Cambodia's forests are now disappearing at an alarming rate, and Mondulkiri will be one of the region’s most affected. The flow-on effects of this; socially, environmentally and economically, will further impact a people and a land already much devastated through years of outside forces.