Cambodia’s earlier history was awe-inspiring, it’s latter blood thirsty almost without parallel in scale, and both have left their mark. In fact it has been said that a curious feature of Cambodia is that after the world’s greatest religious monument, the ancient city of Angkor, the country’s most popular tourist sites are a torture centre in Phnom Penh at Tuol Sleng or S-21, and an execution ground, known as the Killing Fields at Choeung Ek.

Genocide tourism wouldn’t be everyone’s cup of tea. I’ve been to a killing field in Cambodia before albeit by accident, there are in fact hundreds, a large cave where skulls are displayed in the dark and the damp. The victims had been thrown from the edge of the cave into the abyss below, now some form a gory monument to a dark period in Cambodia’s past.

I’ve been to the Genocide Museum at Tuol Sleng, the actual site still with dried blood on the walls after all these years. The story of that place, a former school and torture centre where the Killing Field’s victims were first incarcerated, was told in the form of a love story through film where two star-crossed lovers were separated, imprisoned, and then killed. All this without the narrative mentioning that Tuol Sleng, or S-21— an acronym derived from the Khmer compound noun santebal, which combined the Khmer words for “secret” and “police” with 21, a code number assigned to the institution—was where the vast majority of the 17,000 victims were Khmer Rouge cadres condemned by their own leadership, together with some of those same leaders and in the end even their torturers, for perceived treachery in the hunt for scapegoats when paranoia reigned.

But Cheoung Ek never appealed. It was something about the “sanitised” tourist nature of it and the fact that history was so misrepresented at Tuol Sleng, or that visitors so uninformed, that I imagined the Killing Fields to be worse. 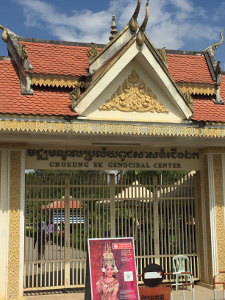 The so-called Killing Fields at Choeung Ek are a regular feature on the genocide tourism circuit for most foreign visitors to Phnom Penh and a good earner for the local tuk-tuk drivers. So is the Tuol Sleng Genocide Museum, and the two feature on any city tour which can be had for US$20-30 depending on your bargaining skills and the time of year. Fittingly then as the two are connected; the detainees at the latter wound up dead at the former and provide an interesting insight into how a country depicts mass murder.

To be accurate, Choeung Ek is one of about 300 acknowledged “killing fields” in Cambodia from the time of the Khmer Rouge who ruled Cambodia for three years, eight months and 20 days from April 1975 until January 1979. According to statistics of democide (the murder of people by a government) from the University of Hawaii, it is estimated that under the Khmer Rouge about 2.4M people died, roughly one-third of the country’s entire population, and that between 1970-80 Cambodia lost up to 4M due to war (including the US Air Force dropping 500,000 tonnes of bombs on Cambodia), rebellion, man-made famine, genocide, politicide, and mass murder.

In proportion to its population, it is acknowledged that Cambodia underwent a human catastrophe unparalleled in the 20th century. By comparison the country which lost the largest proportion of its population during World War Two was Poland, with an estimated 27 percent killed. Cambodia's killing sites are spread over the country far and wide, including the one I saw one outside Cambodia's second city of Battambang without even meaning to, my guide just assumed such things are what visitors to the countryside want to see. At times survivors of the Khmer Rouge tell of the water in the rice fields bubbling, as the bodies from all the victims decomposed and released gasses making the water appear to boil.

Choeung Ek is a popular feature for visitors to contemporary Cambodia, over 5M tourists visited Cambodia in 2016 according to official government numbers many also making their way to ‘attractions’ of Phnom Penh, but few realise that the site goes back to prehistoric times. It is home to one of the oldest recorded settlements in the country, a corral-like earthworks of a kind found across Cambodia and the highlands of Vietnam. The most explored of these is Memot in Cambodia's Tboung Khmum Province, with a dedicated archaeological centre. These earthworks, some 250m in diameter with walls several metres high and dating back to between 3700 and 1800 years old, during the transition period from the Neolithic Age to the Stone Age. Archaeologists have excavated a number of sites in the Choeung Ek area, distinct from those of the execution site.

Most recently the historical earthworks of Choeung Ek were “discovered” through aerial photography in the early 1990s, though was apparently noted by French researchers in the 1920s. Unlike other comparable structures, Choeung Ek is almost a perfect circle, thus making the structure unique. But few tourists go there for the prehistory.

The use of Choeung Ek as an execution site came about as the space available for burials near Tuol Sleng became exhausted, too much slaughter for that quarter. A new site was chosen outside the city, at what had been a Chinese graveyard and former orchard near the village of Choeung Ek. Every night for almost two years victims were trucked for execution mostly from S-21, killed and their bodies dumped into mass graves. Almost 9,000 bodies are estimated to be buried at the site, with some 5,000 exhumed skulls displayed behind glass in the 62m high stupa erected as a memorial to the victims. 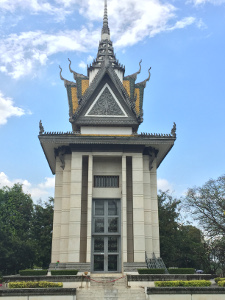 Historian and author Milton Osbourne, who has been coming to Cambodia since the late 1950s, recalls seeing the Killing Fields at Choeung Ek on his first visit back following the fall of the Khmer Rouge, when the graves were still being exhumed. Then it was a markedly different site from the “sanitised” – his word, tourist destination it has become, and the smell of human decomposition hung heavy in the air over the lines upon lines of battered skulls lying on the ground besides the graves.

Residents near Tuol Sleng today report hearing the wails of ghosts at night. The restaurant and guesthouse across the way from the former entrance to S-21 also report strange goings on, which makes you wonder why anyone would wish to stay there or even have an appetite. Phnom Penh resident Steven Boswell wrote an interesting piece on the house in ‘King Norodom’s Head’.

Getting to Choeung Ek usually involves a 40-minute journey through Phnom Penh’s increasingly traffic-jammed and chaotic streets along what were once country lanes, now lined with shops and factories, some spewing dark, smelly effluent into every waterway and byway in order to help keep the world clothed in brand names apparel. The best way is to sit back and let the tuk-tuk driver negotiate the back lanes and side streets. On the way you may even pass some keen people walking. One guy I met walked for over two hours there and when I met him later at the drink vendors, told me he would probably walk back as well. Remarkably his fair skin seemed untarnished by the time spent under the hot sun, a demonstration of the benefits of powerful sunblock.

Like most tourist sites there is the fair accompaniment of vendors, turning the place into a veritable cottage industry. Drinks, ice-creams, t-shirts and other souvenirs are the trade-in-stock, though it’s the first time I’ve been assailed by a fridge. I was also accosted by a backpacker beggar after a dollar, though whether this was towards the entrance fee (Cambodians are free) or for her transport, I wasn’t clear.

Unlike other tourist sites in Cambodia like Angkor, at Choeung Ek you can see where at least some of the entrance fee goes, with some of it plowed back into the facilities. There are multi-lingual audio sets available for every visitor. If it rains, they lend you an umbrella, and the grounds well-maintained. A 30-years deal to run the site has reportedly been signed with a private company on the condition it not be altered in any way. The site is well sign posted and visitors follow the numbered “attractions” in order, meaning everyone travels in the same direction.

The day I went it was hot, and then it rained. When it stopped raining the humidity kicked in and you could smell the heat. Unlike S-21 the provided audio player narrative does tell you who the victims at Choeung Ek were; overwhelmingly Khmer Rouge, over 9,000 of them. Sometimes they waited all night for their time to come. The pits are fenced off with donations of small denominations of riel, the local currency, thrown in as offerings. The paths are lined with markers to guide you, but if you look closely in parts you can still see parts of bones protruding from the earth. Aside from that there is not much to see, save for the large stupa filled with skulls. At 62m high it’s hard to miss but fails to shock or even give pause for reflection or contemplative thought. Perhaps some of that was down to the boom-boom bass music coming in from the next village.

Many Cambodians haven’t themselves been to Choeung Ek or have much knowledge of the era of the Khmer Rouge. The overwhelming majority of Cambodians were born after the Khmer Rouge- 68% of Cambodians are under 35 years old. Many have only the vaguest notions of what happened during the Pol Pot years. Despite the existence of S-21 and the Killing Fields and the abundant foreign literature, and a Hollywood movie, history as it has been taught in Cambodian schools and tertiary institutions up till now has barely touched on developments after 1970. There are of course the trials of a handful of former Khmer Rouge leaders elderly and infirm, an expensive and elongated process neither supported nor wanted by the government.

Moreover, many officials currently holding positions of power, from prime minister Hun Sen on down, were members of the Khmer Rouge. In fairness, it should be noted that exhaustive investigations have not succeeded in linking Hun Sen with any specific crime against humanity in the period before he fled to Vietnam in 1977. There are many others who also served the Pol Pot regime and hold positions of power today. Although their names are seldom mentioned, their existence acts as a damper on public discussion.

Other countries have done things differently. Turkey has failed to acknowledge mass murder; the Namibians are taking Germany to court; Japan maintains a stony silence; Rwanda has attempted truth and reconciliation; then there is the Congo, South Sudan, the Central African Republic, and many others. I’ve been to Yad Vashem, the Holocaust museum in Jerusalem with no expense spared to create a monument. Cambodia has some monuments largely for tourists, some written history by and for foreigners, but little written or formal history for its own population about the period. It was a country where lives were measured in the time before the Khmer Rouge, time during, and then after. Now there is just today.