Pham Ngu Lao sits in Quan (District) 1 not far from the Saigon River in Ho Chi Minh City. There are a number of streets with the name Pham Ngu Lao along the southern boundary of the Central Park of Saigon and the “Love Lake”. The main street, Bui Vien, has been referred to as a seething sea of humanity, but that’s true of Saigon generally.  It’s the area known for budget accommodation, cheap restaurants and outdoor markets. It’s also conveniently close to many of the main attractions in Vietnam’s largest city, and is popular with foreigners and Vietnamese alike.

As a tourist mecca it’s easy to find. Smart, clean taxis you pre-pay for take you there from Tan Son Nhat Airport, Vietnam’s busiest. Buses from Cambodia, with some coming through from Thailand, drop you right in its heart. Boats arrive from other parts of Vietnam on the river, and the open tour buses running up and down the country basically start or finish their tours in Pham Ngu Lao. Every day all day buses going to Cambodia leave from next to Central Park. If you’re leaving or arriving by train on the Reunification Express that runs north to south and back again, as many tourists do, connections are available that run you to and from Pham Ngu Lao. It’s sort of a fully contained functioning tourist hub like Khao San Road in Bangkok. The difference with Pham Ngu Lao however, it that the locals use it as well.

It’s Saigon (or Sai Gon) to the locals and to many visitors. Officially it’s Ho Chi Minh City, which is Hanoi’s way of telling the southerners who’s really in charge. Pham Ngu Lao is named for one of Vietnam’s most capable generals in a country used to fighting for its very survival and with a history full of famous generals and cementeries full of war dead.

I first visited Pham Ngu Lao over 10 years ago and stayed upstairs in a family home down an alleyway off of De Tham for US$5 a night. For that I got a clean room with and my own bathroom and hot water. You had to walk through the family living room to get upstairs. I think it even had a balcony. From there you could watch the goings on in the alley way below and the lanes off of it. That’s the great thing about Asia. What’s mundane back home takes on a fascination all its own here, never a dull moment.

If I recall I’d only just stepped off the bus–quite literally–and been offered the three “M’s” those being motorbike, massage and marijuana. It doesn’t happen quite like that today but in many ways Pham Ngu Lao hasn’t changed. The people going there haven’t changed, though some of us are a bit older but certainly not out of place with the visiting demographics. The same services are still being offered; eat, sleep, drink, go. Buildings have come and gone, and some of the names have changed, owners and staff too. As they say, the more it changes the more it stays the same but at some cost. Saigon is awash with construction cranes dotting an increasingly crowded skyline, visible symbols of one of Asia's fastest growing economies. However, the city's gleaming new look is coming at the expense of its colonial-era architecture, one of its main attractions. 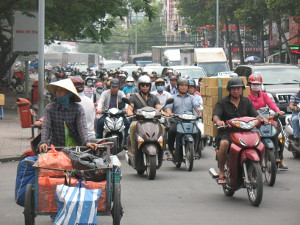 Pham Ngu Lao is place of clutter and an hive of activity. It has buildings barely an arm’s span wide. There is the spaghetti electricity wiring across every street, now so much a feature of life across Southeast Asia they are invariably depicted on t-shirts. Saigon traffic is a must see but comes with a warning. Cross the road at an even pace. Do not run and do not stop. They even have t-shirts saying that, a take on “Keep Calm and Carry On”.

Saigon has over seven million registered motorcycles, comprising 92 percent of all vehicles, and most of them on the road at the same time. Someone once described them as swarming like locusts. At traffic lights there are massed ranks of motorcycles (we’d call them scooters as in “step-through”) in one lane and four-wheeled vehicles in another alloated lane. They travel faster, and there are much more of them than in neighbouring countries, so be warned. It’s not uncommon to see tourists, grown men and women, stuck on street corners afraid to cross for fear of their lives.

Pham Ngu Lao has developed into a one-stop shop for backpackers. Each day hundreds arrive, depart or head out to see the sights of Saigon. Some of them are like homing pigeons, they briefly fly the coop but inevitably turn up again later. Sometimes staying in Pham Ngu Lao is too convenient. Everything you need for your trip can be purchased without making much of an effort, provided you’re prepared to pay a mark-up, the tourist ‘tax”. You don’t have to think too much either.

Most people buy their travel tickets from local travel agents. But if you’re buying a bus ticket you can just walk down to the bus ticket agency and buy one yourself. You’ll find all travel agents do is reserve you a seat and then walk you down to pick up your ticket and show you the waiting room, all for a mark-up. 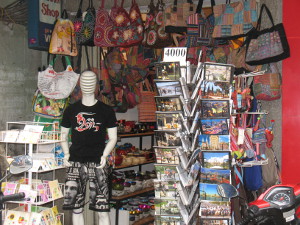 Buses departures can be a mystery. Most leave from Pham Ngu Lao, the actual street, but depending on where you’re going, or who you bought your ticket from, you can wind up on some magical mystery tour. I once bought a boat ticket in Pham Ngu Lao to go from Chau Doc to Phnom Penh. To get to Chau Doc is a seven-hour bus trip from Saigon. To get the bus involved waiting for a minibus that arrived late and full, my seat was a plastic crate.  We then spent an hour dropping off the passengers all over town until I was the last one. They then started picking up more passengers before dropping me at a bus depot down a side street I’d never seen before.

The actual bus to Chau Doc allowed no luggage in the compartments as these were full of motorbikes and fridges, so everyone’s bags were on-board, inside. Another bus another time to Da Lat left from another depot so the travel agent gave me a ride through Saigon rush hour on her motorbike. It’s like Forest Gump’s box of chocolates; you’re never sure what you’re going to get.

Though many things in are constantly evolving, some old favourites remain, or should that be endure. Lily Bar is on De Tham between Bui Vien and Tran Hung Dao just along from the big Crazy Buffalo sign. I was introduced to Lily Bar a few years back, and was told it was a gangster bar. There are two Lily Bars. They sit opposite each other. My favourite spot is looking at the one next to the travel agent. 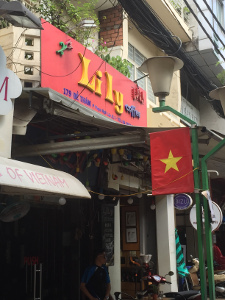 There’s nothing spectacular about Lily Bar. Mama San, usually dressed in various nightwear, wanders between the two across the street in and out of the traffic. From a pocket she produces prodigious rolls of Vietnamese dong. Stoutly built and communicating in gruff tones, she reminds me of Saigon’s version of the Bond villainess, Rosa Klebb. They have just three tables and six chairs outside. Beer, the sign says it’s “Fxxxk Strong” is twice what it costs in restaurants nearby and they serve no food. Rather you can order in. This is delivered on a tray carried by a man in one hand while riding a motorbike with the other hand. He does this without letting any of the dishes slide off. He can do two meals, six dishes at a time. No mean feat.

The bar appears to be owned by brothers. They don’t drink alcohol, rather strong black iced coffee and smoke cigarettes and marijuana this is passed between the two and one or two accepted regulars in the “circle”. Little is spoken. Inhaling is usually followed by coughing fits turning their eyes a watery red. They look like they’re either are, or were, handy welterweight boxers, being of that build, and are distinguished by heavy signet rings and assorted bling. One day some mates turned up. They all looked similar with the oldest doing a good impression of a middle-aged Elvis, complete with sideburns.

Walking down the streets in used to be difficult in Pham Ngu Lao well, it is anywhere in Southeast Asia. That was until a couple of years ago when the local People’s Committee of Pham Ngu Lao District decided to reclaim their territory. There was a concerted effort to remove the thousands of tiny plastic chairs that spilled out into the road, and the hundreds of parked motorbikes. It didn’t last long, though I notice some bas, like Lily Bar, have less chairs than previously but you still can’t walk down the footpath.

Pham Ngu Lao may be budget heaven but it caters to all ages and types. There are guesthouses there with swimming pools and Filipino bands, though thankfully as they can be but metres away from your room, curfew is early. One mate of mine recalls a night on the tiles ending in a Pham Ngu Lao bar, now long gone. An Aussie couple sat down opposite well intoxicated and ordered food. While he was talking to the man the woman passed out face first on the table, while the bloke paid no attention whatsoever. The food duly arrived. The Aussie bloke pushed the plate over. “What about your girlfriend?” my mate enquired. The Aussie replied barely pausing for thought, “Nah, she got to learn to hold her grog.”

The whole of Pham Ngu Lao area is constantly changing but is still the centre for backpackers in Saigon, and should remain so for some time to come. There is just so much to do here and all at a budget price.