Sihanoukville on the gulf of Thailand is fast becoming a destination on Cambodia's tourist trail, and has always been popular with locals. The trip from Phnom Penh takes about five hours by road and can be a little hair-raising. As a tip I’d avoid using minivan services. While they promise to get you there faster than larger buses, and usually do, they also place your life in more danger.

Let’s face it driving in Cambodia is dangerous enough without someone behind the wheel continuously on the phone, and overtaking whenever a vehicle is sighted a short distance away coming in the opposite direction. As someone commented on the Khmer 440 blog; ‘If you were to make a list of all the fucked up, retarded, inept, stupid shit you shouldn't do on the roads, that would actually turn out to be the Cambodian handbook on how to drive.’

The road journey would be faster and less life-threatening if you weren’t forced to share space with many of Cambodia's eclectic truck fleet. Of various vintages, invariably overloaded, poorly maintained and with drivers for whom the rules of fatigue do not apply, other vehicles are often reduced to a crawl behind trucks barely capable of hitting 60kph on the flat and walking pace on the inclines. Despite the introduction with much fanfare and at some huge cost to foreign nations’ development budgets, Cambodia's ‘rehabilitated’ rail line to Sihanoukville has not removed these clapped out road blocks from the highway.

As a tourist destination in Asia you’ll have to expect the usual tourist-prey annoyances in Sihanoukville, though at least the child beach vendors of old seem to have been moved on.  In the decade or so since my first visit the main beach, Ochhateal (spellings vary), has had several revamps. The cows have gone, seemingly preferring to graze on slim pickings at the town’s new railway station. There’s now a beachfront promenade. The original beach shack restaurants were bulldozed, then rebuilt as more permanent structures before being demolished only to be rebuilt again. Nearby is a house the size of a hotel taking up almost an entire block with separate quarters for the staff, and seemingly the longest standing structure in sight.

Where once a sandy track went to Serendipity Beach there’s now a road lined with hotels and restaurants. There are even “Super Tuk-Tuks” made of customised Camrys, proving there are 101 uses for old Toyotas. A pier has been built for ferries to the nearby islands, which are opening up to greater numbers of tourists. These tourists, mainly backpackers, can be seen waiting their turn to embark to some soon to be spoiled tropical paradise on the many islands the dot the coast in these parts. 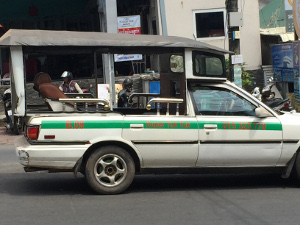 As a town I’ve always been rather underwhelmed by Sihanoukville. As someone once said, it would never win first prize in a pretty town competition. If you want a beach destination it has many rivals with seemingly more to offer. The town is home to Cambodia's only deepwater port which has little appeal for tourists unless you’re a cruise ship passenger—50,000 reportedly came through last year with many left wondering what there was to do with their day release. The town’s main market is only for the bravehearted or those with an avid curiosity. Victory Hill has some views of the area but doubles as the town’s red light district, and has some rundown guesthouse and restaurants for the more down-at-heel.

Sihanoukville’s beaches range from the secluded to the private to maximum tourist use. These have all the beach attractions you would find in such places; restaurants, dive shops, convenience stores, bike rentals and the like. At night there are fire jugglers, cocktail buckets and thumping bass music, your standard fare in these parts.

As the beaches are the largely the main attraction you would think that they’d take some care to keep them clean, but unfortunately this is not the case. Sadly the detritus of the modern age, mainly plastic, polystyrene as well as glass invariably can be seen along the beach daily together with discarded fishing nets, crates, nails and other unidentified flotsam and jetsam. It’s staggering to see how people here pollute their environment. In front of a sign pronouncing this as the greatest bay in the world, a bit of a stretch at best, the newly built promenade has a sinkhole the size of small car, now doubling as a rubbish dump. Even the grounds around signs asking people to dispose of rubbish carefully are strewn with litter. 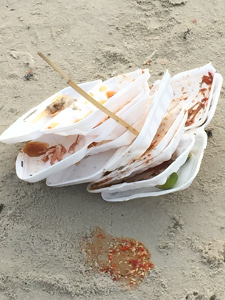 Efforts to find Sihanoukville’s new infrastructure, the town’s railway station, met blank stares and confusion at the town’s tourist offices, with one even suggesting asking tuk-tuk drivers where this was located. Eventually I found it squeezed between the port facility and some waste ground. It has barely opened and already it appears on the road to neglect. There was no one inside except for a man asleep in a hammock. He offered to sell tickets from the drawer of an old desk, there being no computers. Train services only run three days a week; Friday through Sunday, so for the time being the cows had things to themselves.

Cambodians come to Sihanoukville to get away from Phnom Penh, mainly at weekends and on public holidays, of which Cambodia has many. Russians did come, but now it’s mainly chain-smoking Chinese, and the usual backpacker crowd. Backpackers in Sihanoukville give a whole new meaning to passing trade. So much so that Serendipity Beach has been referred to as a sort of decompression chamber. On their way to and from the islands, they grab some food, maybe stay a night, and are gone.

Once upon a time when I was younger backpackers were often interesting; they actually made the trip. They were curious, attractive, some stunning, full of potential. Some of the most interesting people I ever met were out there doing the same things as me. By comparison, most backpackers I saw in Sihanoukville were a pretty sad lot; scruffy, unattractive, overweight, with some borderline anorexic, tattooed, pierced, dreadlocked, and or shaved, and almost wholly uninterested in the surroundings or even each other; just their smart phones. You’ll also find the odd foreigner behaving badly. Like the helmetless, shoeless, shirtless guy on a motocross bike doing “donuts” in the middle of the street much to the annoyance of many passers-by. 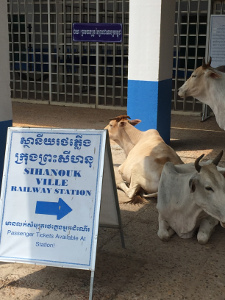 There are tattoos aplenty to be had in Sihanoukville, though a mate who’s a cultivator of body ink says he’d never trust the hygiene. Judging by all the backpackers you see about covered in scribble a few have doubtless dabbled. Such things lend me to lyrics of Jimmy Buffet’s ‘Margaritaville’ something about wasting away having been there all season and waking up with a tattoo, a “real cutie” though without a clue how it got there.

Peak season in Southeast Asia is defined as November to April, the dry season. In Cambodia peak tourist traffic is much shorter and over by February. Newspaper reports quoted business owners as saying this season was the quietest ever. Bars I saw had few people in them. Many businesses were for sale. Every hotel had vacancies. Rooms on the beachfront with ocean views were easy to come by.

Sihanoukville’s casinos are the reason many visitors come. They are big business for foreigners, especially those escaping tight anti-gambling laws at home. ‘The house always wins’ takes on a whole new meaning hereabouts. One casino supposedly lost $160,000 to some Cambodians, only for the winning punters to be offered their money by cheque. When they demanded cash the owners called the local police who ticked off the owners for letting in Khmers in the first place, gambling being illegal for Cambodians. What happened to their winnings is unclear.

Chinese investors are now flooding in, with some leasing out whole apartment blocks to house their incoming workforces on building projects. Sihanoukville has business partnerships aplenty. There are Khmer-Turkish, Khmer-Russian, Khmer-Australian, and Khmer-Chinese to name but a few. The latter are responsible for demolishing one casino to make way for condominiums aiming at other ways to entice people from China, Taiwan and Korea to part with their money.

Development is haphazard. Land titles are dubious at best. Over the years vendors on Ochhateal Beach have been evicted, moved, evicted again, and had their property bulldozed with such frequency the whole place barely seems to have any permanence about it. Land evictions are seemingly part of the landscape here. What is yours is someone else’s if they have better connections. Power is money and money is power, which means that the elite get whatever they want.

Sihanoukville’s police have a rather dubious reputation, which also goes for Cambodia constabulary generally. Much of their time is taken up with freelance entrepreneurial activities. They have a great time of it fleecing unwitting tourists unused to dealing with the so-called KKK, or Keystone Korrupt Kops, as one expat periodical refers to the local constabulary. The traffic police confine themselves to fines for not having a local licence, though an international driving permit is supposed to be recognised in Cambodia. While the civil police are reputedly focused in a war on drugs as the latest fad. Even 'joint' can now land you in prison on a charge of ‘possession of an addictive plant with intent to distribute’.

Let’s face it, Cambodia's prisons aren't what people would be used to in the West, and neither is the local judicial system. Though as one keen observer put it, 'Cambodia's justice system is the best money can buy'. Should you be arrested in Sihanoukville, or anywhere else in Cambodia for that matter, you will likely have to buy your way out. Waiting times in custody can be long with extended stays increasing the desperation and with it, the price. Despite building a new prison outside of Sihanoukville, amenities remain poor as does the food, though at least now there’s not so much overcrowding. It’s not the holiday in Cambodia you’d want.

Sihanoukville offers some quiet spots like past Hawaii Beach with a view of Snake Island, complete with its multi-million dollar bridge, though it's curious why they’d build a bridge only for its to be closed to all except on holidays. Snake Island encapsulates Sihanoukville. It was developed by a Russian business group headed by a man wanted on child sex charges back in Russia. They were granted a 99-year development concession back in 2006, which included plans for a ring road, infrastructure and a luxury residential and resort complex. Due to poor pre-sales, the idea fell through but was later rekindled by a local-based investment outfit. This also went largely nowhere. So now the coastline now has a bridge, a 1km long white elephant that cost US$100M, with little perceptible benefit to anyone. 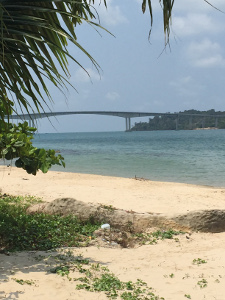 The nearby islands are the latest attraction. The locals were apparently evicted to make way. According to official figures two million tourists visited Sihanoukville last year many to the local islands, which are more popular every year. The latest island to be promoted is Ghost Island. Islands off Cambodia's coast go by an array of names; French, Khmer, Malay, and English. You can call them what you want the problem is how they’re being developed; usually rapidly with little or no thought to sustainable usage.

Let’s face it; part of Asia’s appeal is its laid back nature coupled with the region’s natural beauty and accessibility. But with that comes a price as little thought goes in to what things will be like further down the road. Not many places get more than one chance at things. In another 10 years, Sihanoukville may still be recognisable but many things will have gone for good.

#2 Guest 2019-01-19 15:44
Great article! This is the type of information that are supposed to
be shared around the internet. Disgrace on the search engines for not positioning this submit upper!