It's hard not to be impressed with the value for money of hotels and guesthouses in Cambodia's capital. Every time I go there I discover some new place and give it a try. And then there are the old favourites and one in particular, the Happiness Guesthouse.

I first stayed at the Happiness back in 2011. It was recommended to me by a mate, Kiwi Paul. He seems to have a nose for the gems. Over time I’ve stayed there for days, and sometimes weeks on end. At times I have virtually been living there paying by the month. I like there’s a wide range of patrons from the regular to the itinerant, local to tourist. It’s popular with Khmers, and for people like me, a kind of home away from home.

It’s a long way from my first trip to Phnom Penh over ten years ago, and the guesthouse fare then on offer. These were basic, largely full of backpackers, a narrow set with eyes only for Lonely Planet who viewed the DVD, The Killing Fields, and not much else. To be fair rooms could be had for as little as $2, though these were for the real budget traveller or the downright desperate, there being a few of both.

At Happiness I’ve met teachers, retirees, backpackers, students, families, even people doing PhDs living there. At times there’s almost a community feel to the place, with a core of regulars based there. Then there’s the constantly revolving door of guests, a perpetual turnover of people coming and going. A pile of bags is usually left by reception, as people leave for a few days only to return. Some of the guests are interesting and educational, and some others dodgy that you probably wished you’d never met. 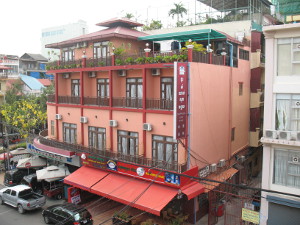 The nightlife can be amusing, sometimes entertaining, and at other times, downright annoying. The floors are stone and the stairs noisy. Invariably the sound carries and you can be all too aware of the comings and goings. Some night time goings on can be amusing and others not so. Like the French guy arguing with a taxi girl in his room at 3am for example. She wanted paying for services rendered, apparently over a series of nights, and then proceeded to reel off in detail a list in clearly audible tones of what these had entailed. Other times guests decide to hold conversations outside rooms rather than in them, annoying during the day, while providing for sleep deprivation at night time. To be fair neither of these events would be peculiar to the Happiness or most other places for that matter.

The décor is heavily varnished wood, as is much of the furniture. Cambodia likes its dark, heavy tropical wood furniture. You can be left wondering where all that timber comes from, and what was done to get it here. You can probably guess Cambodia's forests are fast disappearing. The walls sport framed prints of paintings depicting Cambodian life. Usually these are rural scenes or of Angkor, and the type seen in hotels and in countless restaurants across the country.

The Happiness Guesthouse is located on Street 51, Rue Pasteur, on the corner of Street 130, one block over from Central Market. It’s a great location close to Sorya Mall, Lucky’s Supermarket, and not far from the Riverside. Underneath the guesthouse on the ground floor corner is a travel agent, I’ve used a few times. On the block between the Central Market and the travel agent is a line of shops selling fancy watches few locals can afford. The pavement is usually blocked by SUVs and prowled by security guards or bodyguards dressed in loose-fitting safari suits, ideal for concealed weaponry.

There are in fact three Happiness Guesthouses, all owned by the same family. One is up near the container terminal on Riverside. I’ve never stayed there but its distinctive flesh-coloured paint scheme is instantly recognisable as part of the family.

The other two I’m very familiar with as they sit almost directly opposite each other. On the eastern side is what’s referred to as Happiness Number One, the original. A narrow building it has a lobby. The rooms are smaller, and the ceilings lower. The housemaids live upstairs near the laundry on the roof. The rooms remind me of ship cabins and can be a little claustrophobic. Alright for a night or two at best. I usually stay there only when I’m waiting for a room across the street to become vacant.

Like most rooms in Cambodia they come with a queen size bed (I’ve also had super-king size), singles and combinations thereof. You get a fridge, air-con, Wi-Fi, and satellite TV with all kinds of weird and wonderful channels. Football is beamed in 24/7. There are movies, local Khmer channels, and others with the overseas news networks from Korea to Spain, and France to Japan. Every room as an ensuite and can be quite comfortable for stays of varying lengths. I think I’ve stayed in just about every room in Happiness Number Two over the years.

There’s no lobby as such. The front desk is squeezed into the ground floor entrance way, a single door-width wide. Part of the ground floor was once taken up with a mechanical workshop. Suitcases competed with engine oil and gearboxes. Then the family owners moved them out and installed a 24-hour convenience store complete with a kitchen serving tasty Khmer dishes until 10pm. They do happy hours beers with jugs for next-to-nothing. Included was room service from the kitchen. Sadly, the kitchen has now gone.

The rooms are cleaned daily by a trio of Khmer farm girls. I can always tell when they’ve been in the room. Aside from the towels and made bed, the television is set to one of the karaoke channels at full volume. There’s another tell-tale sign. This being a hot tropical climate, the windows and curtains at Happiness are usually kept closed. I’m the opposite and I like to see the sun and have fresh air. Perhaps this is something about coming from a temperate climate. The staff being locals, prefer the opposite, and invariably close what I’ve opened.

If I was long staying at Happiness I’d hang a sign on the door saying don’t clean today, I couldn’t see the point in them coming in every day. Once they left the staff pass for the electricity, a substitute for the key tag, in the room. Rather than hand it back I kept it which meant when I came home at night there wouldn’t be a puddle of water in the bottom of the fridge and the drinks were still cold. I hope they didn’t get into trouble.

Rooms are usually booked up, so it would pay to phone ahead. The day staff speak better English than the night crew. If I know I’m heading that way I get a friend to wander down and make a booking, or just turn up and take pot luck. Last time I stayed at the Happiness rooms still started at $15.  I usually stay on the third floor which has a small terrace and a roof garden. The former staff quarters and laundry in Happiness Number Two have now been converted into three additional rooms, making a total of 23 rooms. These go for more, about $20-22.

True, the chattels are now getting a little dated. The televisions could do with replacing, the remotes well worn. Some of the air-con units can be noisy and the wardrobe units have handles or screws missing. Some don’t close properly. You can ask to have these attended to, but often nothing happens, at least not in a hurry. In my experience that’s not peculiar to the Happiness either.

Last time I couldn’t turn the shower off in 204. It’s one of those instant water heaters operated by push button. I had to leave the shower running to get dressed, and go and get one of the house maids to do it. She laughed and marched right in and gave it an almighty thump. It instantly went off. The next day the same thing happened, though when I tried the brute force technique I failed to get the same result. Back she came. I could see this going on every time. They wouldn’t come and fix it, and I didn’t want to wind up with a bill for the damage, so I moved rooms. Pity, I liked that room.

For the record, the terms ‘guesthouse’ and ‘hotel’ are interchangeable in much of Southeast Asia, Cambodia too. I’ve stayed in guesthouses far superior to some hotels, so one term doesn’t necessarily imply a standard of superiority over the other. Generally speaking, some of the guesthouses I’ve stayed in have been the best value for money for accommodation I’ve found anywhere.

For sure there’s a fantastic range of hotels from the corporate five-star to the so-called ‘boutique’ to those for backpackers on a budget. I like it there as it’s still possible to find somewhere very comfortable for under $20 but the times are a changing. Not so long ago you could get an air-con room for $10. I don’t know why people fork out hundreds of dollars for hotels, especially if they’re paying. I can’t say I’d want to splash out that much cash. There’s no doubt about it, visitors to Phnom Penh looking for accommodation are spoiled for choice.