I like the differences about Asia, not the similarities. If it was all the same I’d stay home. On a recent trip from Saigon to Phnom Penh I was struck by the way things in Asia have a curious way of disappearing. I don’t mean ordinary things like keys or even your wallet. I mean things like passports and people. And then just as curiously they reappear, sometimes on cue.

I’ve made the trip between these two cities many times; by boat, by plane and by bus. As the crow files the distance between them is only 240kms, 170kms in Cambodia and 70kms in Vietnam. By plane is fastest, flight time under an hour. By boat is the most interesting but can take two days. The cheapest route is by bus but it’s also time consuming. By bus can take all day and lead to some interesting observations.

On my last trip from Saigon I bought my bus ticket off one of the many travel agents in the side alleys off Pham Ngũ Lão, a Vietnamese who spoke English with an Australian accent. Wishing to avoid the usual melee at Cambodian immigration I opted for him to get me a visa, for which I paid extra. Despite assurances all would be arranged, he phoned me the night before the bus left to inform me I could get my passport back in the morning before the bus left. I’d asked him where the bus left from. “Just up the road mate.” I assumed this to be the main road near the park where most buses left for Cambodia. But then you know what they say about making assumptions. 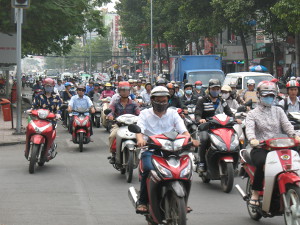 The Australian-Vietnamese travel agent was nowhere to be seen at his office at the appointed pick-up time. His teenage children merely shrugged their shoulders and mumbled something when I asked where my passport was. All this is interesting, frustrating, irritating, and all part of the “experience”. After a 40 minute wait, sweat trickling down my back and near the departure time, my passport appeared without explanation. It’s like a riddle you cannot solve. The bus was a minibus ride away through rush hour Saigon. I disembarked the minibus found my prescribed seat in a bus with a dozen or so passengers, and we promptly left. After delays everything goes like clockwork, and then vice versa.

I like Cambodia. Whenever I arrive in the country I get a kind of warm glow. A famous credit card provider would put it like this: price of the bus ticket to Phnom Penh $12; the bus driver’s smile - priceless. This was a Cambodian bus and crew. The crew work like this. There’s the driver who’s the boss. The first assistant is a bus driver-in-waiting and handles passports and any cash. The second assistant deals with luggage and inflicts all with karaoke and dubbed Hong Kong gangster chop flicks, the louder the better.

For my money anyone who can successfully steer a large vehicle out of a city like Saigon probably deserves a medal. It’s no easy task. Saigon’s population is roughly 9 million. There are 3.5 million motorcycles and over 340,000 vehicles. Streets are narrow, the traffic chaotic. Motorcyclists swarm like locusts, their massed ranks bank up at traffic lights. Then there are pedestrians and cyclists by the tens of thousands. Most people travel by two wheels not four. Then there are the street vendors to negotiate and street cafes, lots of them. Parking is on the footpath so pedestrians are forced to walk in the road, more congestion.

At one intersection the driver left it late to brake. His miscalculation caused no injury. For his error he was baited with a series of one-liners and giggles from his colleagues. All the while his face broke into one of those broad Khmer smiles for miles.

On some bus journeys passengers are second to freight carried. Under every seat, including mine, were packages wrapped tightly in muslin cloth. The back of the bus several rows deep were stacked from floor to ceiling.

Being in the transport sector comes with risks as an employee. I’ve seen Cambodian bus drivers’ elbow deep in gearbox oil fixing a breakdown. If there’s an accident, which is often, the usual practice is to do a runner. Read any article regarding a fatal crash in Southeast Asia and you’ll usually find something like ‘… the driver fled the scene.’

The road to the border, Vietnam National Highway 22, is a dual carriageway, broken up continuously by traffic lights. The terrain is dead flat. Outside Saigon is the Cu Chi suburban district, where tourists flock to see the network of tunnels constructed during the American War by the Viet Cong. After Cu Chi is Tay Ninh Province, which extends all the way to Moc Bai at the border with the Kingdom of Cambodia.

En route the bus driver’s assistant collected all the passports. “Do you have [a] visa?” He asked. A young English guy teaching in Saigon was outraged to learn the cost of a tourist visa was US$35. “It only costs $20 last time, that’s daylight robbery.” Miffed, he declared he would be getting his own visa once at the border. Unbeknown to him the cost of a Cambodian tourist visa had increased in late 2014 to US$30, the extra five bucks was the crew’s cut. At the border I lost sight of him.

Just shy of Moc Bai the bus stops and some women passengers disembarked onto waiting motorbikes and disappeared into the backstreets. With no passports, the locals skirt immigration and pay the “unofficial visa” fee to border officials. Rates can vary, but anything is possible. Cambodian friends tell me it’s just part of the process. 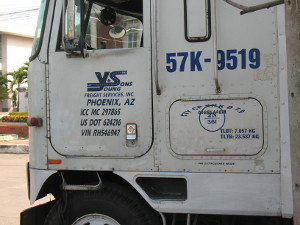 At the official crossing trucks carrying containers are parked nose to tail. Some are imported still bearing the name of the previous owner, like the one I saw that once belonged in Phoenix, Arizona.

With a visa there’s no longer any paperwork to fill out. You get off the bus on the Vietnamese side, and wait about. If you stand at the front you can see money changing hands. Most backpackers pay little attention. Since the advent of smart phone technology, the “look down” generation pays even less. Tourists’ passports get stacked spine up on the counter where the immigration official pretends to ignore them. The bus driver’s assistant waits nearby. At the duly appointed moment he steps forward and pushes a roll of notes across the counter. In a flash it disappears with all the other banknotes.

No wonder photos are prohibited. A sign on the wall declared Vietnam has claim to the islands in the South China Sea dating back to the 16th century. The longer I had to stand there and sweat, the less sympathy I have for their territorial claims.

After exiting Vietnam you’re effectively in no man’s land. The bus takes you the short trip to the Cambodian immigration and customs hall. The English teacher from the bus had disappeared having deprived the bus crew of their five dollar fee. I entered the immigration hall through a side door, got waved on by an official and walked into Cambodia with no passport, visa and without filling in any form whatsoever. After having my temperature taken I was declared a fit person to travel to Phnom Penh. It was time for lunch.

I saw brazen corruption on behalf of the Vietnamese, none on the Cambodian side. I’ve heard it said that there’s a misconception that corruption; far from impeding life, draining individuals and shackling an economy, is actually a well-oiled machine. When it works it all goes like clockwork. Like smooth systems anywhere everyone knows what to do and plays their part. If this is the case, the Cambodians do this better than the Vietnamese, at least here. Transparency International would have other views.

Past the gaudy casinos in Bavet the bus drives nose first up to a large open air restaurant. Meals cost $2 payable in advance. Passengers without dollars ask if they can pay in Vietnamese dong. The passengers without passports reappear. My passport, taken from me earlier is nowhere to be seen. No stranger to this chain of events I console myself the Cambodians have things under control. I wouldn’t be having lunch otherwise.

By the time we got back on the bus the passports were back. There’s a misnomer passports are sacrosanct, respected, to be handled with care. In reality they get passed through many hands from moto riders to haughty border guards, and probably wind up as grimy as paper currency. You could do yourself a favour a wipe them down occasionally for hygiene purposes. 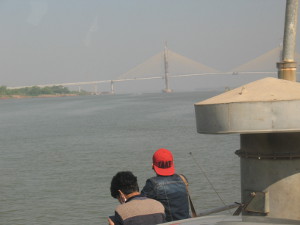 From the Cambodian border National Route One takes you through the provinces of Svay Rieng, Prey Veng and Kandal before Phnom Penh itself. The bus journey is interesting for two main reasons. Aside from getting to meet some locals and see life in the countryside pass by the journey takes you over the Mekong River by ferry ride at Neak Leoung; or at least it did. To the north is the impressive Tsubusa (Neak Leoung) Bridge. At 2,215m the longest bridge in Cambodia and will form part of the Trans Asia Highway from Saigon to Bangkok.

One thing travelling by road to and from Cambodia demonstrates is the stark difference in infrastructure. Vietnam is streets ahead. After Neak Leoung the journey into Cambodia slows considerably; congestion, erratic driving, wandering livestock and roadside furniture. The last four kilometres of road into Phnom Penh are unsealed and chaotic. Vehicles bounce along through potholes. Stops are frequent. In the dry seasons, clouds of dust you can cut with a knife cover vehicles and roadside residents alike. When the road is sealed the potholes will disappear. This will only occur when a foreign government provides the money. Like the new bridge, infrastructure in Cambodia is entirely foreign funded. But as maintenance is poor, one day they’ll reappear too; same, same but different, as they say in these parts.

The article has really peaked my interest. I am going to take
a note of your website and keep checking for new information about
once per week. I subscribed to your Feed too.
Quote
#1 Guest 2015-07-27 03:00
Hello, I enjoy reading all of your article post. I like to
write a little comment to support you.
Quote
Refresh comments list