Cho Ben Thanh, or Ben Thanh Market is the most celebrated and regularly visited of Saigon’s markets and probably the city’s biggest tourist trap. It’s a hive of commercial activity and the sights are an assault on the senses. But the experience however, is not always pleasant. In contrast to neighbouring Laos and Cambodia, “No” in Vietnam seems to be an invitation to an argument, especially from female vendors. 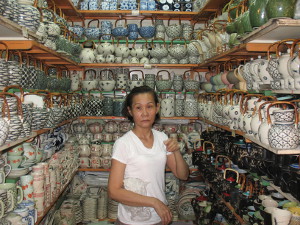 Vietnam is that great contradiction, a country of full-blooded capitalists run by traditional communists, where the dollar and the dong rules. As far as markets go, Ben Thanh Market tends to bring out the best and the worst in Saigon markets and people. The sales techniques of some of the market’s stall holders would satisfy the legal definition of physical assault in most jurisdictions. A refusal to buy can result in you being manhandled, or, as is more frequently the case at Ben Thanh, woman handled.

Because it gets so many tourists the prices at Ben Thanh are higher than at other markets. There’s a tendency for many of its stalls to be filled with tacky touristy items that you will see everywhere you go; and you get harassed, grabbed and pressured by sellers like at no other market in Saigon. It’s also a favourite haunt for thieves, and not just the ones charging daylight robbery, but a magnet for pickpockets. 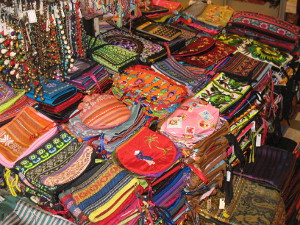 Located in the heart of Vietnam’s largest city, Ben Thanh market has long been viewed as a symbol of the country’s busiest economic hub. Every time I’ve been there it's always filled with the sounds and smells of commerce as people shop ‘til they drop. Spanning over 13,000 square metres, Ben Thanh market sees over 10,000 visitors daily. Inside the grid-like hive there’s nearly 1,500 stalls with over 6,000 small businesses selling wholesale and retail items of everything you can think of and some that you probably cannot.

Ben Thanh contains everything that’s commonly eaten, worn or used by the Saigonese. The market is open 12 hours a day. To keep going the vendors are supplied via takeaways from the fresh food stalls. Food is delivered by waiters balancing an array of dishes on trays, swerving through the shoppers, their cameras and backpacks, none of whom appear to be wary enough to spot or smell a boiling hot pho approaching.

The famous market has four entrances and four sections, and overlooks four main streets of downtown Saigon. According to local architectural historians, Ben Thanh market is considered a historical monument. Over time it has maintained the unique traits of a century-old market without being bypassed or made irrelevant in the city life of an rapidly modernising country. If anything, it seems to more than hold its own amongst the surrounding cityscape. 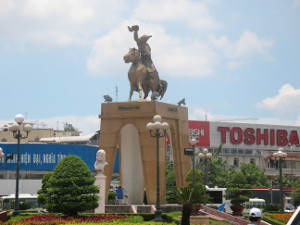 On sale are the usual knock-off handbags, backpacks and shoes. You will find more traditional souvenirs, like lacquer art, hand-made lanterns and chopstick dining sets. While designer copies are everywhere to be found, digging a little deeper here will lead you to some interesting stalls selling items such as waterproof bags and full blown works of art. In the rear of Ben Thanh you will find a wet market selling fresh meat, fish and flowers. At the back left of the market would be considered the food court, where you can find almost any food or drink you’d care to try. Prices here are more than what you’d find at most street stalls in Saigon, but by Western prices they are still quite inexpensive.

Ben Thanh has been Saigon’s busiest market for 100 years, and was known to the French as the Halles Centrales. The building lacks the charm of the Central Market in Phnom Penh with its distinctive design and marvelous acoustics. Like Phnom Penh’s masterpiece Ben Thanh has burst at the seams, disgorging stalls onto the surrounding pavements, where an amazing array of produce can be seen. Inside the main market building itself, a tight grid of aisles, demarcated according to produce.

Ben Thanh is within walking distance of the main tourist area of Saigon, Pham Ngũ Lão, where Le Loi, Tran Hung Dao and Le Lai converge at the central roundabout. This is where the backpackers largely head for when visiting Saigon, Vietnamese too. You pass right by Ben Thanh on the way to some of the city’s other main attractions such as, Notre Dame, the Central Post Office, the Town Hall, Saigon’s classically modelled Opera House and the landmark Hotel Continental to name but a few. 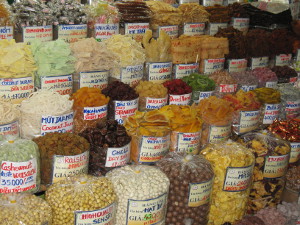 For ease of identification the large roundabout sports two statues of Vietnamese defiance in the face of adversity, in a country at pains to honour them. One, civilian and contemporary, pays tribute to a teenage student who was shot dead by the former regime. The other, martial and classical, of one of the Emporer Le Loi’s generals who helped vanquish forces of the mighty Ming Dynasty from Vietnam’s great adversary, China, to the north.

At my latest visit to Ben Thanh, an Australian couple of gargantuan proportions offered sales advice on a vendor selling business shirts. On hearing the recommendation my curiosity was immediately interpreted as wanting to buy. Foolishly I stepped in. I said I didn’t like anything and went to leave. They went to get more choices, which turned out to be more of the same. They interpreted the extra effort as another guarantee I’d purchase but I had other ideas. Trying to leave was just a clever ruse to reduce the price. They persisted and resorted to holding my arm and blocking the exit. Vietnamese reinforcements arrived. I was even less impressed than they were. We parted on less than amicable terms

Vietnam is full of markets. There’s been a market near the Saigon River for 300 years. The river is where soldiers would land and merchants traveling up and down the river would load and unload their goods for sale. Gradually, the market became known as Ben Nghe or Ben Thanh Market due to its location near the wharf (Ben) and the Turtle Citadel (or Quy Thanh). When the French conquered the Saigon Citadel in 1856 they rebuilt a large thatch roofed mud-floored Ben Thanh Market near what is today Ham Nghi Street and Nguyen Hue Street, then waterways. Like Phnom Penh, main streets in Saigon were once canals. Bustling, the convenient location near the wharfs, perhaps led to it becoming a victim of its own success. The market burned to the ground in 1870.

Afterwards the French rebuilt the market in the same location but with steel frames. This new steel framed market became the largest market in all Saigon. Early photographs from this time show the market housed in parallel buildings, like military barracks, the streets devoid of vehicles, unlike today. Over time its character has changed and the buildings modified many times. The current building just passed its centenary having opened formally in March 1914.  Until the 1920s it was known as New Ben Thanh Market. This is the building seen today with its distinctive clock tower. In 1985 it was restored and renovated with major work to both its exterior and interior design, though the overall architecture remains with its trademark clock tower in front.

At night the evening crew take over with a night market. For an interesting spectacle you can watch how quickly Vietnamese can turn a 100 metre long road into bustling hive of activity.

Saigon, like Vietnam, is full of markets, big and small, for tourists or not. Other markets around town are the Chợ Cu, the Old Market which was called Ben Thanh Market before 1914 when all the vendors were moved into the new building. There’s Binh Tay Market, also known as Chợ Lớn Mới or Cho Lon Market, the central market of District Six. There’s Dan Sinh Market or the War Surplus market. Its origins were similar to that of the Russian Market in Phnom Penh, originally selling off army equipment, but in the case across the border these included actual weaponry. Given Vietnam’s recent bloody history there was a steady supply military equipment mainly apparel, but now much of the goods are newly made, albeit in traditional army style.

Ben Thanh is quintessential Vietnam; the traditional market place with colonial overlay, now in a communist country with a free market economy. You may not find what you want, but it’s never dull.

#1 Guest 2015-08-14 01:04
It's amazing designed for me to have a site, which is valuable in support of
my knowledge. thanks admin
Quote
Refresh comments list