If you’re tired of the heat in tropical Vietnam you can do what the colonials used to do, head for the hills. A few hours by road from Saigon is Dalat (or Da Lat), the capital of Lam Dong, and a stop on the route to the coastal wonder of Nha Trang. Dalat was an escapist hill top retreat built for French colonials, a surreal touch of the French Alps. These days it’s a hybrid, a cross-cultural blend of Asia and Europe with visitors from both.

The road trip by bus between Dalat and Saigon varies between eight and 11 hours depending on the route taken and Vietnam’s ever-worsening traffic congestion. Vietnam is in danger of being swallowed by its population. Despite investment infrastructure cannot keep up with the traffic volumes. Large articulated trucks of American origin drag containers across country competing with overladen vehicles of every description. Buses are modern by and large, but often driven hazardously while carrying all manner of freight. Sometimes the passengers can seem out of place. 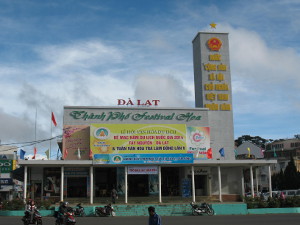 The road to Dalat heads east taking an hour to exit Saigon. There are the usual unexplained stops and others for comfort, which only serve to make the journey even longer. Lunch was a mass organised affair at an open air services choked with buses, trucks and other vehicles, and queues of people, lots of people. The Vietnamese maître d asked me to select hot food from the bain-marie and ushered me to my seat all in well spoken English. The service was punctual, good food at a cheap price. Tea was complementary. The maître d, a man in his fifties, his demeanour and appearance immaculate, gave me my change  from a wad of notes so large I was surprised he carried it so inconspicuously.

The final approach to Dalat is up a winding narrow mountain road surrounded by trees. The journey made slower by long queues of vehicles following overladen trucks moving at barely a snail’s pace. Once through a narrow pass over the crest there is the city laid out across rolling hills.

It is said that the name of Dalat is derived from the language of the local ethnic group. Dalat sits on the Langbien Plateau in the southern part of the Central Highlands which stretch five provinces bordering eastern Cambodia and the southern tip of Laos. The highland area is home to the Montegnard or “Mountain People” in French, a carryover term from the French colonial period, but is now applied to a variety of minority ethnic groups. Because of it temperate climate, Dalat is known as “The City of Eternal Spring” to some, the city of thousands of pine trees to others, and to the French “Le Petit Paris”. It sits at 1500 m altitude in hills covered with pine trees and surrounding Xuan Huong, an artificial lake. The whole area is known for its natural produce; flowers, fruit and vegetables, and coffee. 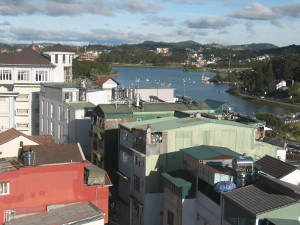 Compared with Saigon the pace of life in Dalat is leisurely. There are no traffic jams, throngs of people, or cacophony of horns. There are boutique shops, the usual adventure tourism ventures, nice cafes, good restaurants and the air is clean. Being a resort town it has an abundance of hotels but it pays to avoid peak times, when even they fill up. From the bus station on one hill a courtesy bus takes you into town past the lake and up onto another hill with Dalat’s distinctive central market. Its art deco design is featured on photos seen on hotel and restaurant walls across town, with shots usually taken in the 1950s when the hillsides were barren and streets devoid of traffic.

A change of scenery in Dalat includes watching the locals wander about in puffer jackets. Winter hats are so plentiful surplus items are piled high on pavements and sold for a pittance. The nights are chilly and the mornings misty. The charcoal burners of food hawkers are welcome relief in the hills. A wander around the town reveals temples, shops selling traditional varieties of rice, and others given entirely over to that latter day staple in Asia, infant milk formula.

Dalat was one of the great hill stations built over two centuries by Europeans across Asia stretching from the British in Pakistan’s Northwest Frontier, the French in Indochina, and the Americans in the mountains of Luzon in the Philippines.

The city was the creation of the French Governor-General of Indochina Paul Doumer, later President of France who agreed to create a resort centre in the highlands, early last century. Town planning was led by Ernest Hebrand, a renowned French architect, archaeologist, and urban planner, best known for his later work redeveloping the centre of the Greek city Thessaloniki, following a devastating fire.

Hill stations were built for health reasons—physical as well as mental—as sanatoriums, convalescent centres and ultimately escapist retreats for relaxation. As author Barbara Crossette points out these days many hill stations built by Europeans are overgrown, often overpopulated, and no longer European, but most have not lost their unique appeal. Air-conditioning notwithstanding, the plains still fry in the sun, and the cities of Asia have only grown larger, noisier, and more polluted.

For most Europeans colonial life was less about empire or commerce or missionary zeal, than a battle for survival. There was sunstroke and “Jungle Fever” a catch-all for a myriad of tropical diseases dysentery, cholera, malaria and a host of other unnamed deadly fevers as well as “tropical fatigue” a latter day medical euphemism for various forms of depression.

Travelling in Asia now, one sees advertisements for hill stations pitched to local tourists in terms similar to those that publicised them first among colonial elites. They’re also popular with government officials who use them in much the same way and for the same reasons as the colonial elites of yesteryear. 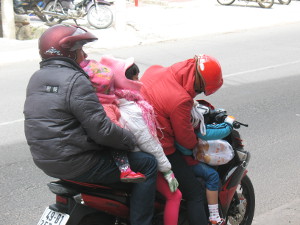 Dalat survived Vietnam’s recent violent history relatively peacefully. During World War Two, it was the Vichy capital of French  Indochina. Vietnam’s elites favoured Da Lat also. The king of Annam, Boa Dai, the last of the Nguyen Dynasty, had three palaces in Dalat, one of which is now a golf course. Vietnamese wander about greens in strangely coordinated clothes swinging clubs after an elusive white ball in open grounds that seem strangely at odds with the crowded houses and narrow hillside lanes that dominate the city.

In 1963, South Vietnam’s first president, Ngu Dinh Diem, spent some of his last few days alive in Dalat. He joined the US ambassador, Henry Cabot Lodge, for a weekend retreat unaware that just prior to their plane leaving Saigon, Lodge had made the call to Washington that would see “their man in Asia” ousted. A few days later, the president of South Vietnam was dead, shot in the head by his own military.
During the ensuing Second Vietnam War (the one with the US), Dalat went largely unscathed save for assaults by the Viet Minh during the 1968 Tet Offensive. Aside from that its strategic position seemed of little consequence to the North Vietnamese.

Much of the architecture of Dalat is dominated by the style of the French colonial period. The city is noted for a variety of architectural styles from expressionist to Art Deco and buildings claimed by their. The Hang Nah Guesthouse resembles a giant banyan tree and has been described as a “Fairy Tale House” by some and “The Crazy House” by others.  Its creator Vietnamese architect, Dang Viet Nga, holds a PhD from Moscow University and is said to have been influenced by Antoni Gaudi and Salvador Dali. The guesthouse is listed in some guidebooks as being amongst the 10 most “bizarre” buildings in the world.

Early January is a busy time in Vietnam, there’s five days of national holidays. Finding a hotel can be tough. I was turned away from one after another until offered a night in the open plan kitchen and dining room of one establishment. I got a shared bathroom, a mattress on the floor of large room and great view of the lake for $US20. Unfortunately the room was also home to the building’s water pump which erupted like a generator. Despite assurances this would go of “soon”. I got my money back and headed out to go door knocking for a bed.

Fortune followed adversity as I found the excellent Ken’s House Backpackers. I was welcomed with tea, got breakfast included and for US$7 got a bunk bed in a spotless dormitory. Everywhere else was full. It’s the only time I’ve stayed in a dormitory in all my years in Asia.

People from northern and more temperate climates will find Dalat warm during the day and cool at night. Temperature can be relative. The Vietnamese in Dalat, even the locals, don puffer jackets, gloves, hats and winter wear as if expecting a blizzard. They ride about town on motorbikes like Michelin figures appropriate then, given the town’s French origins.

Today Dalat seems to be in the middle of a development boom. Large tracts are given over to building sites and earth works. Dalat is also known for once being the pet project of the founder of DHL, who put some US$40 million into renovating and developing, amongst others, the Dalat Place Hotel and golf courses. Originally called the Lang-Bian Palace Hotel, it had been constructed in the 1920s to compete with the luxurious hotels of Southeast Asia like Raffles. In Dalat it became a conspicuous symbol of French domination in the city. Now there are new elites; party apparatchiks and Vietnam’s burgeoning entrepreneurs. Twenty years ago most Vietnamese earned a living from the land, now it’s manufacturing. Global giants have poured billions into Vietnam attracted by large tax breaks. But in Dalat life seems to go on much as before. I like it because hardly anyone hassles you. You don’t’ seem to attract the same unwanted attention as a tourist in Dalat as in other parts of Vietnam.

If you want to “chill out” or just want a change of scenery from the plains, deltas and beaches, in southern Vietnam check out Dalat; part of the Vietnam’s colonial past and part of the future.