The play-off for a place in the 2014 World Cup in Brazil second leg in Wellington on 20 November was in stark contrast to four years before at the same venue.  New Zealand had just been ‘thumped’ 5-1 by Mexico in the cauldron of the Azteca Stadium, one of football’s most iconic grounds. Prospects for qualification in the home leg were remote.

More than anything else, the match showed the gulf in class between a team from Oceania ranked outside the top 100 and one of the world’s perennial powerhouses, and current Olympic champions. While the match was a boon for the local economy staging the game, it pointed to long-term issues affecting the game in New Zealand; namely where they should be playing in future and how. 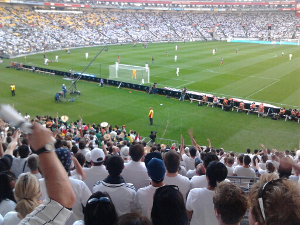 Four years previously, New Zealand’s ‘All Whites’ faced weaker opposition in Asian contenders Bahrain, who had been kept scoreless in the first leg played in Manāma. All the home side had to do then was repeat the feat of the first leg and score, which they did on half-time. To cap off a magnificent night for New Zealand football, goalkeeper Mark Paston, saved a penalty in front of the full house, and the they went on to become the only unbeaten team at the World Cup in South Africa.

This time it was different. Outpaced and outgunned by Mexico five days earlier, even without their overseas players to call on, New Zealand had defended largely in the final third. Defending in depth is based on closing the opposition down. New Zealand didn’t do that. They afforded the home side so much space and time that when passing the ball inside the opposition half, defenders weren’t often in sight of the receiver.

Nevertheless, the tactic worked until just on the half-hour mark when Paul Aguilar (32’) and then Raul Jimenez (40’) scored. Pity, New Zealand’s chances rested on frustrating the Mexicans. With the crowd on their backs, the home side might become rattled and be vulnerable to a quick counter-attack.

The turning point in that first leg came just after half-time when Chris Wood blasted wide. At 2-1 New Zealand would have had that valuable away goal and closed the lead. Instead, things went Mexico’s way when Oribe Peralta, star of the play-offs, scored the first of his five goals over the two legs on 48’. He got another on 80’ before captain Rafa Marquez completed the rout with the coup de grâce. New Zealand’s unlikely hero was Chris James, who then scored a consolation goal from open play with the Mexicans still celebrating, but the damage was well and truly done. 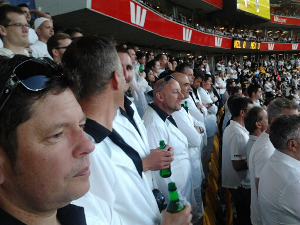 New Zealand’s only hope for the second leg, according to one blogger, was that Mexico’s players would celebrate big time, including cocaine, get busted, and that the Mexican cartels had a fortune on New Zealand winning. No chance. Mexico’s drug barons may be vicious, but they’re still patriotic.

Both teams then made the long trip across the Pacific to New Zealand.  Some Mexican fans too, and 300 attended the match accompanied by the Mexico ambassador to New Zealand. In the days leading up to kick-off, these fans were seen wandering the streets of a remarkably becalmed Wellington, a city notorious for its wind, probably wondering where all the people were.

Mexican players walked about too looking like suntanned greyhounds. Some New Zealand players by comparison, looked like they belonged on the rugby field. Mexico great Hugo Sanchez had compared New Zealand’s woeful performance earlier at the Azteca, as that by ‘failed rugby players.’

Mexican television made the trip broadcasting live from the waterfront with the heads of passers-by and runners bouncing behind the presenters. One visiting commentator said he found Wellington “very laid back” coming as he did from a city of 20 million, and adding it had taken him two days to see a policeman.

Wellington did very well out of hosting the tie, as they did for the match against Bahrain in 2009.
The capacity crowd came, and they did come despite the forlorn nature of the score line, from all over the country and from overseas to watch the match. All week the weather was warm and Wellington’s notorious wind stayed away. Two cruise ships visited the same day, discharging 6,000 passengers into the city for the day. The bars were full, many of which had hired extra staff to cater for the upsurge in business. Souvenir shops did a roaring trade. As opposed to rugby, when New Zealanders go all black, football fans go all white.

Among the crowd there were the John Travoltas. A dozen guys dressed as if for Saturday Night Fever, who had driven all day to get to the match and only received their tickets three minutes before kick-off. At that time there were thousands still waiting to get into the ground, missing the kick-off. I saw a man dressed as a horse. In town, as the crowd made its way to the ground, drummers beat out a constant staccato.

With seemingly nothing to lose and with his last game in charge looming, coach Ricki Herbert went against his grain and opted for attack. Youthful injection of pace and skill from the likes of Kosta Barbarouses, Marco Rojas, Bill Tuiloma, second half substitute Louis Fenton, and the forcefully named Storm Roux. Midfielder Chris James, currently off-contract from his club side in Finland, was an unlikely scorer for New Zealand in both legs. More seasoned pros Shane Smeltz, Rory Fallon and Jeremy Brockie provided solid performances with Fallon netting late in the second half.

But it wasn’t to be and Mexico won 4-2. Peralta scored a first half hat trick killing off any remote hopes of an upset. The defence, missing two key players, never came to grips with his runs. After 20 minutes a Mexican fan ran onto the pitch only to be escorted off. “A long way to come for such a short time” someone said. After the second Mexico goal someone threw his plastic bottle at Mexico fans located near the touchline. “His mum must’ve bought that beer,” said one of the Travoltas, “because if he bought it himself, he wouldn’t be throwing it away at these prices.”

To their credit the crowd quickly pointed out the culprit and he too was escorted out.

But the void in class was marked. Despite this being a Mexican side that struggled in qualifying in CONCACAF and only made it to the play-offs and with just seconds to spare of the entire campaign, Mexico's hopes were all but over. Their defeat on the final day against Costa Rica meant Panama, playing at the same time, needed only to beat the already-qualified United States at home to book their place in Brazil. With the Panamanians leading 2-1 in injury time, the Americans struck back, scoring in the 91st and 92nd minutes, to end Panama's dream in the most painful of circumstances.

So poor were Mexico, they won just two of their 10 games in the final round of qualifying drawing five and losing three to Jamaica, Costa Rica and Honduras along the way and only scoring seven times.

Afterwards, the New Zealand national coach of eight years Ricki Herbert stood down. Many said his time had come in any case. Too conservative in his tactics and too sentimental with players, some deemed past their use-by-date for clubs yet still considered good enough by Herbert at national level.

Where to now for New Zealand? The national body has announced a NZ$6 million profit, mainly due to the World Cup play-offs. The 35,000 that attended the Wellington match and lucrative deals with television networks that broadcast the tie to over 100 countries contributing to the healthy coffers.

As someone highlighted, the real problem New Zealand football faces is that it’s a tiny country of only 4.5 million people in which football is not even the number one winter sport. With less than 100 players that are full time professionals to choose from, and of those players only ever two or three that played at the top level of the game at any one time.

Another said the problem is the confederation the All Whites choose to base themselves. Relative minnows on the world stage, they are just far too big a fish in the small pond that is the Oceania confederation.

Interviewed post match stand-in captain Tommy Smith wanted a "fresh approach" moving away from the direct style characterised by the Herbert era. After Mexico's 9-3 aggregate victory over two matches, Smith admitted that the All Whites' conservative long-ball style of the last eight years wasn’t the best thing if the team wants to improve. Coming only hours after Herbert's final match concluded, it was the first hint that the team hadn’t been keen with Herbert's game plan and tactics; that perhaps the players felt stifled by the lack of adventure and ambition that sometimes frustrated the fans.

"Hopefully we can start to play a more productive passing game," said Smith.

Herbert's critics have long advocated the kind of positive approach on display in the Wellington leg where they outscored Mexico 2-1 in the second half, though admittedly, it was too little too late.

Whether he has had the players available to play a possession based style is debatable, but Herbert has never seemed to encourage an approach that values keeping the ball.

At his last press conference in charge of the national team Herbert took the chance to deliver a football sermon. He traversed many subjects, from his legacy and achievements to his constant critics, as well as his last match in charge. Herbert was pleased with New Zealand’s performance especially the second half where he said that the All Whites had "exposed" Mexico after trailing 3-0 at halftime.

He believes the inexperienced New Zealand team showed some great potential and said he was looking “forward to 2018 and buying a ticket at Westpac Stadium to watch them play."
That aside, Herbert occupies an almost unique place in World Cup annals as one of the few people to have represented his country in the finals as a player and then as coach. Beckenbauer went one better, or two, winning the tournament as both.

Many have been keen to forward opinions on what and where New Zealand’s football future should lie. Given the Oceania Confederation’s poor standing globally, some think New Zealand should follow Australia into the Asia, which they did in 2006. The A-League champions now play in the lucrative AFC Champions League. So joining Asia could be a very good financial move for New Zealand Football too.

The calibre of coaches and managers within New Zealand are not international standard, which will mean having to pay big money for a manager from overseas. On a positive note, it's time for big decisions for New Zealand Football and may be the time has never been better.

#2 Guest 2015-02-21 10:35
Hi there, I found your site by means of Google even as
looking for a related subject, your web site got here up, it looks great.
I have bookmarked it in my google bookmarks.
Hello there, simply beome alert to your weblopg thru Google, and located that it
is truly informative. I am gonna be careful for brussels.
I will be grateful should you proceed this in future. Numerous other
people will probably be benefited from your writing.
Cheers!
Quote
#1 Guest 2014-08-04 17:01
Hey There. I found your blog using msn. This is an extremely well
written article. I will be sure to bookmark it and return to read more of your
useful info. Thanks for the post. I will certainly comeback.
Quote
Refresh comments list