Wellington is one of the most earthquake-prone cities in one of the world’s most earthquake ridden countries, New Zealand. The city sits along a series of major fault lines where every day thousands of people live and work. On average, there is an earthquake every 30 seconds, most of them too small for people to detect. The “big one” locals tell you, is long overdue and could happen “any day”.

New Zealand is scarred by geological forces. It sits on a geological fault line circling the Pacific Ocean, the so-called Ring of Fire. About 90 percent of the world’s earthquakes occur here and four out of every five of the world’s most powerful. The country’s Southern Alps, rising to almost 4,000 m at their highest point, mark the dividing line between the great Pacific Plate to the southeast pushing westward colliding with the northward-moving Indo-Australian Plate to the northwest. Today they keep rising higher due to tectonic pressure. 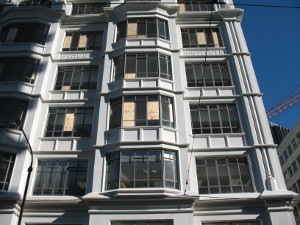 Earthquakes are a regular feature of life in the Wellington. Its inhabitants are probably the most aware of this potential deadly natural phenomenon in the country. Locals tend to be nonplussed by the power of earthquakes.

On Friday morning, 19 July 2013, the city was struck by the first of three big earthquakes all centred between 10km and 20km below the sea floor in nearby Cook Strait. Two more struck on Sunday. These were followed by hundreds of aftershocks felt up and down the country and out at sea.

Wellington’s buildings are in the middle of a programme of strengthening designed to bring older buildings built prior to 1976 to meet 33% of the modern code.  All inner city buildings have already been assessed. Those with yellow stickers have three years to complete strengthening or they will be deemed uninhabitable. This follows on from raised awareness of building codes since the deadly Christchurch earthquake of 2011, which killed almost 200 people.

While frightening on land, earthquakes can also be felt at sea. At the time Sunday evening's 6.5-magnitude earthquake beneath Cook Strait struck, the 45-metre trawler, Aukaha, was right above the quake’s epicentre.

The vessel’s skipper, Brent Thomas, said people often asked him if earthquakes could be felt at sea. Now he knows. There was a noise and a shudder like a massive explosion beneath the 1200-tonne trawler.

Nearby, passengers on the Cook Strait Interislander ferry, Arahura, a much larger vessel which was crossing the area at the same time, were alarmed by the shaking felt on the vessel. At first the captain thought at first he had hit something.

"I'd never felt an earthquake at sea before," said Brent who reckoned that in 24 years at sea he’s never felt anything like it. “The whole boat was shuddering. It felt like a massive explosion had gone off beneath us." The Aukaha was preparing to fish when the quake hit. Brent said he stopped the boat, turned up the radio, and began checking everything but could not explain what it might have been, so he carried on. 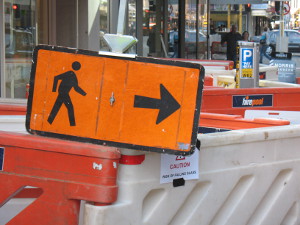 "It was like a loud, shuddering steel noise. I would have sworn something had gone through the propeller, like a log, or a net. I shut down the pitch, then we were dumbfounded to learn it was an earthquake!”

In Wellington, drivers on the city streets pulled over, thinking they had been rear ended.

The fault line that caused the earthquakes in Cook Strait has long been known to produce earthquake "swarms" but none have been recorded as devastating, according to historical records.

The Wellington quakes that occurred three times on Friday, July 19, and twice on July 21 and the following aftershocks were due to city's plates moving between the Pacific and Australian tectonic plates. New Zealand is resilient to earthquakes in general. Professor of Geophysics at Wellington’s Victoria University Euan Smith, said that the interface between the underlying Pacific plates and overlying Australian plates was a critical fault. He said the same fault could potentially cause massive earthquakes.

Mr. Smith also said residents in New Zealand have a valid reason to be concerned since severe earthquakes can be unpredictable. The latest seismic activities were similar to a swarm of smaller earthquakes which occurred in Wellington in January 1950.

The 30 earthquakes in 1950 had a magnitude of 3 and also occurred in Cook Strait. The previous location of quakes was only 50 kilometres from the current earthquake's epicentre. If the latest Wellington earthquakes would have directly hit the city, there would have been significant damage. Sunday’s tremor was about a third of what a new building in Wellington was designed to handle, according to the Institution of Professional Engineers New Zealand.

First light on Monday revealed the extent of damage in the city. On Featherston Street, one of the city’s main thoroughfares, dozens of windows were broken, with broken glass littering the street. Masonry has sheared buildings as buildings collided instead of moving in unison.

Some new buildings on the Harbour Quay suffered “cosmetic damage” with broken glass, ceiling panels down, and water damage from sprinklers that went off.  Police had retracted reports of sinkholes in Featherston St, with Civil Defence saying there were only indentations in the footpath.

Three car park buildings remained closed, stranding dozens of vehicles. The car park at nearby the 34,500 seat sports stadium was also being checked. Wellington City Council buildings in the civic complex were structurally fine but were closed and cordoned off for some further checks of sprinklers.

With shops and offices closed and people urged to stay home the city had an eerie feel to it. The main railway station was deserted at 8am on Monday, when usually thousands of commuters would be on their way to work. One taxi driver reported that you could fire a cannon down some of the main streets without fear of hitting a moving vehicle or a living soul. Business for the day was going to be so bad he was off home.

While most retailers suffered from a lack of business after earthquakes struck the region, emergency gear suppliers and window repair companies have been flat out. Some companies were calling in glaziers from out of town to support Wellington staff. The city was also recently hit by a series of storms with winds topping 200kph so many businesses had had a month's worth of insurance claims within 24 to 48 hours, on top of its normal work. Most property facility management companies had organised engineer assessments before anyone can actually go in, so engineers were also busy.

Hardware stores reported that basics like water cylinders, torches, batteries, blankets, first aid kits had all been in high demand. Backpack emergency kits designed as “grab and go” and stocked with survival supplies had been selling wildly at supermarkets, online and in some hardware shops. Some stores reported taking orders to be filled in the next 10 weeks. Freight companies reported logistics have been able to keep up with demand. Despite the quake being unforeseen most were still ready for it.

The shake caused about five metres of reclaimed land to subside into the sea at Wellington port’s Thorndon Container Terminal, taking with it a container and a large buoy.

Seismologists said the quake was a "one-in-several-decade event". The many aftershocks were “normal” and not unusual behaviour for the Cook Strait region. “It's following the pattern we would expect" said a spokesman.

Scientists are now deploying extra seismic instruments in Marlborough near to the epicentre to enable more accurate measurement of the aftershocks off the coast. They will deploy nine instruments in coastal Marlborough over the next few days to boost the quality and quantity of data being recorded by the existing national network of instruments.

There was a small possibility that some of the faults in this region could pose a tsunami threat, so scientists had issued a reminder that if people near the coast felt strong earthquake shaking for 30 seconds or longer, they should move to higher ground.

Later reports said the earthquakes were caused by a faultline previously believed to be relatively small but that now could be capable of much bigger earthquakes than originally thought. Scientists believe the aftershock sequence indicated that the fault was roughly 24 kilometres long, and most of it “unzipped” to produce the magnitude 6.5 quake at 5.30pm on Sunday.

The National Institute of Water and Atmospheric Research are sending its flagship vessel, Tangaroa, to map the area around the swarm of earthquakes. Scientists will now try to measure whether the quakes have relieved or increased the stress on the Wellington Fault, which runs under the CBD and is capable of quakes greater than magnitude 8.

#4 Guest 2018-12-01 08:29
My spouse and I absolutely love your blog
and find most of your post's to be exactly I'm looking for.
Do you offer guest writers to write content to suit your needs?
I wouldn't mind composing a post or elaborating on many of the
subjects you write related to here. Again, awesome website!
Quote
#3 Guest 2018-07-05 09:11
This website was... how do you say it? Relevant!!

Finally I have found something that helped me.

Thanks a lot!
Quote
#2 Guest 2018-06-11 23:50
Hi, always i used to check website posts here in the early hours in the daylight, as i love
to gain knowledge of more and more.
Quote
#1 Guest 2014-08-30 18:04
I'm extremely impressed with your writing skills as well as with the
layout on your weblog. Is this a paid theme or
did you customize it yourself? Anyway keep up the nice quality writing, it
is rare to see a nice blog like this one these days.
Quote
Refresh comments list