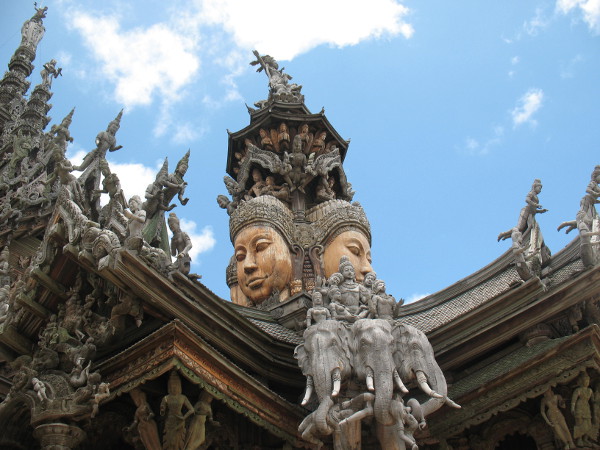 Phnom Penh is a city where the streets have numbers rather than names save for the main thoroughfares, though some have both. As someone once commented, “the thing about Phnom Penh street names is that they are fun for every purpose except the obvious – identifying where you are or where you are going.”

Some street names have changed over time, which is not always represented on tourist maps, and only serves to add irritation to confusion.

My taxi from the airport approached the city along Russian Boulevard. Formerly known as USSR it is also Street 110, and a major east to west thoroughfare until it hits Monivong Boulevard (which doesn't seem to have a number but is between 91 and 93) running north to south, once on the other side it trickles along until it meets the Tonle Sap, a tributary of the lower Mekong River. 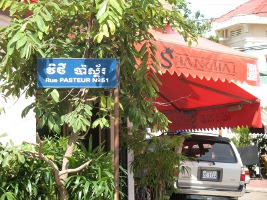 “How’s it hanging bro’?” asked the driver “See I can speak Kiwi,” he added with a huge grin. The standard fare for the trip from the airport is US$9, so drivers usually charge $10. He was taking me to Street 51, or Rue Pasteur after Louis, which reflects the city’s French colonial past, and presents another yet aspect to Phnom Penh’s street names.

At Street 271 or Yothapol Khemarak Phoumin, Russian Boulevard becomes a flyover, a sign of the changing times in Cambodia’s capital, and yet another step in the city’s curious history of road orientation dynamics.

The numbers begin at Street 1 along the Tonle Sap and spread out across the ever expanding city in a confusing pattern. Near Sihanouk Boulevard (274) they hit the 300s, south near the Russian Market the 400s, north west near the Toul Kork Attena there are 500s and further west 600s. Running off Street 598 which later becomes Street 271, streets number in the 1900s and some are over 2000.

Much of the current numbering dates back to 1993 when the UN had fulfilled its mandate.Cambodia was then emerging from the horros of civil war, famine, oppression,enforced migration and summary injustice, and local political allegiances were getting low down and dirty. Other name changes were a consequence of the country’s independence from France 40 years earlier. Colonialism, independence, civil war and invasion have all played their part in local geography. Previously, the frequency with street names and numbers were changed was somewhat of a hurdle to orientation in Phnom Penh.

City planners’ reliance on numbers instead of names for most of Phnom Penh’s streets reflects both changing political allegiances and the city’s rapid development. During the years of the pro-Vietnamese People’s Republic of Kampuchea (1979-1993) a number of streets were named after international communist heroes, such as Lenin and Tou Samouth, the anti-French resistance fighter and local communist party co-founder. 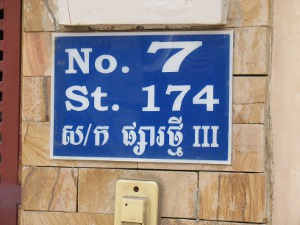 Most Cambodian and French street names however, that existed before 1975 have been discarded as these days they’re seen as carrying too much colonial baggage. With the exceptions of Cambodian monarchs, such names are no longer viewed as suitable by a government seeking to stress its modernity and a new way, and distance itself from the communist past of the leadership. Foreign political ideology has given way to domestic royalty, with Lenin now Sisowath Quay, the premier riverside road, and Tou Samouth renamed Norodom Boulevard after Cambodia’s king from 1860 to 1904.Previously, Sisowath has also been known as Karl Marx and Le Grand Rue.

Other famous names have survived, including Mao Zedong, Charles de Gaulle and the aforementioned Monsieur Pasteur. The former acknowledging Cambodia’s endearing relationship with China, bilateral trade is tipped to reach US$5 billion by 2017; and the others the influence France had on its former “protectorate”.

France gained colonial control of much of mainland Southeast Asia beginning in the 1860s. Under the French, the seat of government was officially moved from Oudong, now an hour’s drive south, to Phnom Penh in 1866. It was only then that the city first began to take on the appearance of modern Phnom Penh.

By the 1880s, early colonial buildings of permanent materials clustered near the only hill in town, the Wat Phnom, in what was then, the French Quarter. Khmers were largely excluded and restricted to primitive wooden and bamboo structures prone to fire and built on malarial swamps, which the city was notorious for, and prone to cholera. 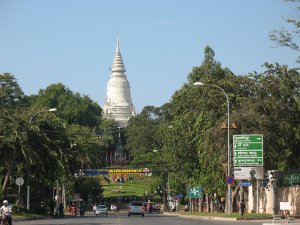 Phnom Penh’s grid-like pattern espoused order and geometric design much like other French colonial cities in what was known as French Indochina. But unlike those other cities where modernity combined with tradition, in Phnom Penh the reverse was true. In a fresh look at colonialism and nationalism in Cambodge: The Cultivation of a Nation, author Penny Edwards explains the pinnacle of Khmer civilisation was firmly rooted in Angkor and had passed, so Europeans built lasting monuments in stone, brick, cement and concrete, while Cambodians were consigned to flammable wood.

The French architecture and grand buildings, much of which has remarkably survived all the turmoil, led to Phnom Penh being called the Pearl of Asia in the 1930s. Many of the city’s main roads were constructed along the route of former canals, Phnom Penh being largely flat. In the wet season, people travelled by boat between the different parts of the city.

Even today, a tropical downpour results in the roads quickly becoming flooded. People are forced to wade through dirty rainwater as the drains quickly back-up, and SUVs create mini tidal waves as the roads revert to their past watery form.

Quai Verneville (now Street 108) was once the Grand Canal and ran for over three kilometres west from the Tonle Sap near the French Quarter. The canal had three arms which formed a triangular moat around the French quarter, isolating and protecting Phnom Penh’s European population, and quarantining the locals. In 1894 they built the Pont de Verneville across the Grand canal, a majestic white stone structure near what is now the Japanese Friendship Bridge, but then sadly demolished it in early 1930s, another victim of the city’s changing landscape and development. 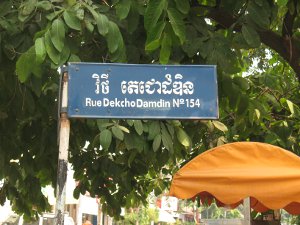 Street 108, formerly Quais Verneville, was also called Oknha Plong, and Piquet became Street 106 rather than Treiyani. Street signs are attempting to recapture some history and clarify location for visitors negotiating the city, and appear with the street number and where applicable, the name. So Russian Boulevard, or more correctly Confederation de la Russie, previously USSR, is also Street 110. Tau Samouth became Sisowath Quay or Street 1, but its Francophone original name now passed over along with other colonial luminaries, was Boulevard Doudart de Lagrée, and Marshal Petain is now just Street 86.

There are exceptions with Pasteur (Street 51), which has the distinction of being the only survivor and is still used by the locals, the Phnompenhoises. Street 47 is called France but before was Charles Thomson, though I’ve not heard anyone refer to it as such.

Adding to the confusion it is a common mistake in assuming that street numbers are contiguous to one another given they are aligned numerically. For example, streets 516 and 514 which, being even numbers, and given Phnom Penh’s street details, you might reasonably assume were nearby to each other. It would be an expensive tuk-tuk ride or a long walk as they are over five kilometres apart.

As someone surmised, it was almost as if the numbering was a lottery with some evil genius behind the numerology of the street system that, as the Phnom Penh Post put it, “constantly conspires to make you late for every appointment.”

Phnom Penh’s street numbers aren’t the only dilemma in finding your way around; there are also the house numbers. While many single-level dwellings have two numbers, many multiple dwellings have only one. I make it a habit, if you’ve got an upcoming important appointment, to scout out a place if possible beforehand as you should never make the mistake of assuming any street will have a house number that is exclusive to one site.

Once down in the area bordered by the boulevards Mao Tse Toung [sic], Monivong, Sihanouk (formerly Monsignor Miche) and Monireth (217), where there are so many international aid organisations based in the grand villas it’s called NGO-land, I encountered the same numbers restarting again on the other side of another road.

Not faraway on Street 310, there are at least two house number 39s. On my former street, Street 178 near the palace and the national museum, the house numbers increase as you head west away from the river, and then commence again at one on the other side of Norodom Boulevard.

In an effort to bring rationalisation to irritation, there are plans afoot apparently by the authorities to revise the city’s house numbering. Whether this proposed effort brings clarity to confusion only time will tell.