Road traffic in Cambodia is a wonder laced with danger. More than mere transport, for the expat observer it can provide hours of entertainment and at times, sheer amazement in a country where the mere mundane can be both fascinating and photogenic. It provides the pulse of life, a hive of activity, the sheer energy that is life in the country the self-style Kingdom of Wonder and its capital, Phnom Penh.

The city has an estimated 900,000 motorcycles for about 1.2 million inhabitants, most of which appear to be on the roads at the same time. There are also over 230,000 vehicles competing for space on city roads from wretched heavy trade to luxury cars; a sign of development according to the authorities, and not rampant corruption. 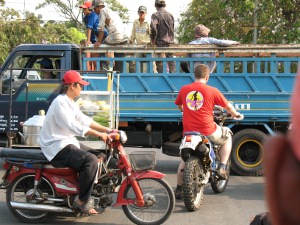 Riding in traffic here is either exhilarating or frightening, depending on your personality.  I find it both. My rented motorbike is a model unlikely to attract much attention from thieves according to Kieran, the shaven-headed Irishman who owns Little Bikes rentals. Kieran knew the pitfalls of travelling on Cambodia’s roads, and of owning a bike rental business. “Keep your money in your pocket and away from the cops,” he said noting the local constabulary’s reputation for eliciting bribes “Riding that thing they’ll think you’re too poor,” he added.

Recently, he’d negotiated the return of one of his big road bikes from the police compound after one of his clients had been arrested for drug trafficking and the bike was seized along with the rest of the culprit’s assets, the petrol tank used to transport the said illegal substances. Another had committed suicide and he’d had to inform the parents, as the grieving man’s widow was too distressed to battle officialdom at the embassy. 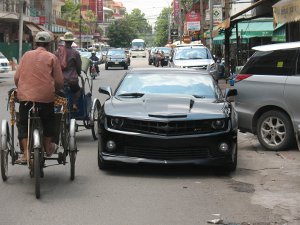 Living in Cambodia many an hour can be spent counting the numbers of pillion passengers on bikes, the vast array of produce carried some defying gravity, and the vehicular melee that passes for intersections. Seated at the Khmer restaurant at the corner of Streets 51 and 154 opposite the New World Institute, a language school, the entertainment only increases in what passes for rush hour in a city once known as the Pearl of Asia, where traffic consisted of livestock and bicycles.

Bikes swarm like locusts around buses and SUVs, trucks and the ubiquitous Toyota Camry. Caught in the jumble, a moto rider, the local private rider and bike for hire, reaches for his phone and starts texting. Seeing a break in traffic he makes a call and with phone to his ear rides off, only to be replaced in the confusion by others comfortably multi-tasking.

Phnom Penh is like riding around in a tumble dryer. Traffic might be slower, but it comes at you from all directions, the danger it always from where you least expect. Riding back from the airport I had to avoid the tuk tuk coming the other way on the wrong side of the road, the driver intently texting on his phone, in just one instance of rider beware. Despite recent efforts at regulation and traffic control, the results have been organised semi-chaos where one-way systems are voluntary, and traffic lights mere coloured decorations strung across intersections.

Traffic survival here is on an evolutionary scale.  Motorbikes exist cooperatively with bicycles and the local tuk-tuk. Cars and SUVs push ahead and trucks rule, size matters.  Everywhere vehicles were traveling in all directions.  Drivers intently focused on their destinations and load.  Road rage is rare with smiles more common than anger.

Riding on the back of a Cambodian moto is an experience, so is Cambodian traffic.  Merging traffic here is not a science it’s an art form.  Give way rules are made up as you go.  Nobody looks when they merge into traffic, it just occurs.  You ride into the traffic and proceed expecting others to have seen you and adjust accordingly.  Riders follow the line of the handlebars.  Near misses are frequent.  As riders rarely use rear vision mirrors on bikes, sometimes they are turned inwards in a statement of complete contempt, and nobody turns physically to look, you have to hope that others will do for you as you would do unto them. 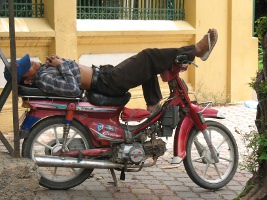 You need to be aware that a pillion passenger’s knees extend farther than the riders, especially large European knees.  Elbows stick out.  As you are constantly squeezing through often rapidly shrinking spaces with vehicles and various objects accelerating at all speeds from various angles, it pays to realise where you sit in the scheme of things.

It’s not uncommon to find yourself attempting to push away the car centimetres from your person in the traffic throng, however vain that is.  Curbs are another cautionary obstacle.  Remember you are likely wearing open footwear of sorts, so are especially vulnerable as the rider inevitably cuts inside some vehicle or other.  In fact you suddenly become acutely aware of your vulnerability but just remember you share this with everyone else.

If you’re carrying a large pack, it’s a mission not to be thrown off the back of the bike with even the slightest acceleration.  Once, a moto rider offered to take my day bag complete with laptop on the step through part of the bike.  Placing your trust on a moving bike of your most expensive possessions between the knees of its rider may sound foolish until you realize, that is where Cambodians put their children.

Motorbikes are ridden while conducting numerous activities.  Whole families are often on one bike together, including women breast feeding infants as casual as you like.  If Cambodians, like Vietnamese, can’t get it on a scooter it probably can’t be done.  Riders with the implements of business; ludicrously large and unwieldy oxy-acetylene bottles, farm animals such as pigs, household furniture, patients with IV drips, and people in all manner of attire from pajamas to elegant evening wear are everyday sights.

Graceful Cambodian women elegantly sitting sidesaddle on the back of a scooter is an endearing memory of the country.  Some sit applying their make-up.  Others carry voluminous amounts of shopping.  Infants, some asleep in the local version of a sarong, the krauma, remain oblivious to the activities that surround them.  The most people I’ve seen on a motorbike in Cambodia is six, while an acquaintance, a Mancunian of longtime residence, claimed to have once seen nine people including two children on the handlebars. 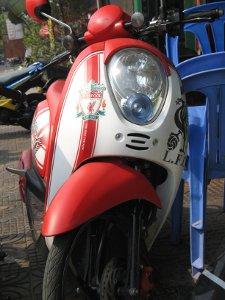 Though crowded and chaotic, perhaps the one saving grace of traffic here is it doesn’t move that quickly; though boy racers exist. Due to the gross disparities of wealth in Cambodia, rich kids drive expensive SUVs and big bikes are now more common. Some expats ride Ducatis and Harleys; while Khmers go for big Japanese bikes, like the Yamaha F1 superbike, often surfing the New for the latest custom ideas and then getting the local chop shops to customise their rides.

According to Belgian NGO Handicap International, the narrow Cambodian roads cater for various means of transport with various levels of speed, causing many crashes. There’s little awareness about road safety, a lack of respect for stop lights, and risky behaviours like speeding and drunk driving.

While traffic activities in most countries would not interest me in the least, I found myself able to watch Cambodians going past with something akin to fascination.

Accidents occur.  They are often injurious to those involved, a situation worsened by vehicles affording little protection and exacerbated by the lack of ready access to affordable, quality medical care for the overwhelming majority of the population.  Assuming they can afford it, anyone seriously injured or ill in this country leaves for hospitalization in neighbouring states.  The poor suffer and die.

Drivers intently focused on their destinations and load.  Rear view mirrors are mere accessories and barely used for their intended purpose to aid the rider or driver for increased visibility and safety. Instead, mirrors on motorbikes are utilized for grooming as Khmer men rarely need to shave but instead pluck facial hair, and often can be seen bent in front of handlebars intently extracting some growth and examining follicles. If you park you bike up in allotted street side parks, you can return to find your carefully aligned mirrors askew having been twisted this way and that to accommodate roadside grooming. 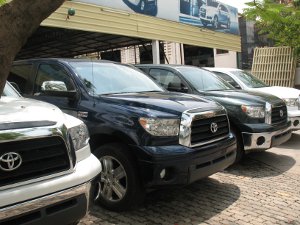 Sometimes the motorbike just makes a great place to rest up and sleep away the day, and Cambodians can be seen stretched out along the seat, feet resting on the handlebars.

The world’s largest selling motorised vehicle, the Honda step-through motorcycle or scooter, in its various models, is the vehicle of choice in Cambodia. Others however, like Daekim, Yamaha and Suzuki all compete for a market share.

Recently, the Honda Scoopy, based on the Vespa has been turning heads around the Phnom Penh, even in a city where Honda’s dominance of the motorbike market is almost total. Curiously, as things aften aren’t what they appear, Honda has not imported any of the special-edition Scoopys, and their presence in Phnom Penh is the result of grey-market importation from Thailand across small border crossings. Some cost up to $2000 and have become targets for organized criminal gangs stealing to order.

Limited-edition releases come with flamboyant designs, including racing stripes and outsized stickers of lipstick, and with the team colours and logos of popular English Premier League football clubs like Manchester United and Liverpool. Bikes in the Liverpool colours have the club’s logo, “you’ll never walk alone” affixed to the chassis. In Phnom Penh, you’ll certainly never ride alone.