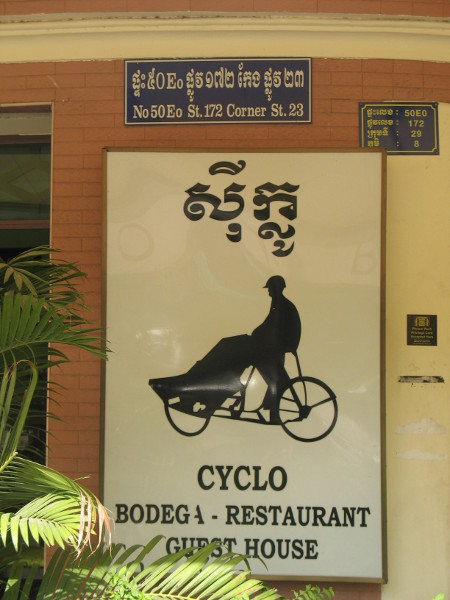 About 100 kilometres southeast from Bangkok at Banglamung near Pattaya in Chonburi is the Sanctuary of Truth, one of the strangest sights in Thailand. Touted as “The Magnificence of Heaven Recreated on Earth”, the Sanctuary of Truth is a huge structure made entirely of carved wood and looks like a temple of the bizarre from some giant film set.

You can see all manner of things in Pattaya, go-go girls, steroid induced body builders, or the more mundane like bland shopping malls; but then there are things you don’t altogether see at home, like the Temple of the Bizarre. 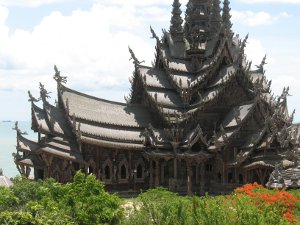 The Sanctuary, also called Wang Boran or Prasat Mai in Thai, began life in 1981 the brainchild of Thai business man, Lek Viriyaphant, an eccentric millionaire. Also known as Khun Lek, this peculiar character was responsible for other bizarre projects such as Ancient Siam (formerly known as Ancient City), a park covering 200 acres in the shape of Thailand; and the Erawan Museum, known for its known for its giant three-headed elephants.

The Sanctuary building itself is located behind a fortified wall, like those used to mount cannon on a small peninsula, Cape Rachvate. Access is down the side streets off Naklua Road which runs north from Pattaya, the signs hidden amongst dozens of others and therefore difficult to see. The beach front here along this part of the coast is full of upmarket resort hotels where the tourist information is now almost all in Russian, marking the arrival of Thailand’s latest wave of new tourists.

I had a mission finding the Sanctuary. Having looked it up online, I found that the distance was nowhere near as great as I had thought and wound up on the main Sukhumvit Road which runs all the way to Bangkok. On the approach to Sukhumvit, I was stopped by the police. The woman at the hotel where I rented the bike had warned me to keep my licence with me “in case of the police” and she’d been right.

I also had a copy of the rental agreement, in Thai and English. “Oh, a rental,” said the police officer, in his skin tight brown uniform, white helmet and black boots waving me on ignoring my licence. The Thais weren’t so lucky, some of whom seemed to be haggling over the cost of the fines. 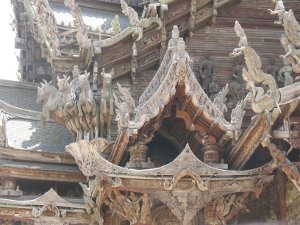 Access to the Truth comes at a price, 500 baht (US$16.60 or 512 Russian rubles, the latter having more relevance these days), plus add-ons for other attractions that may appeal – not cheap – and probably aimed at the short-break, package tourists jammed into the high-rise upmarket hotels nearby.

Children are half price provided, apparently, if they’re less than 140cm in height. These extras can include elephant rides, a tour by horse and cart, dolphins and speedboats for offshore views for photos. The site also comes with its own firing range, curious that the purpose of the Sanctuary is supposed to be intended as a reflection of the “Ancient Vision of Earth, Ancient Knowledge, and Eastern Philosophy.”

Parking my rental motorbike I was immediately hit by animal smells; mainly horses but elephants and some of Thailand’s army of dogs. The guard at the gate waved me off to the side so as to almost hide my vehicle from the tour buses. I looked over at a miniature of the Sanctuary, resplendent with flags, their multi colours flickering in the breeze under the midday sun. 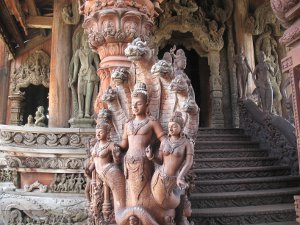 At the ticket office they want to know your country of origin; and again at the top of the stairs leading down to the beach. “I want to come too” said the woman behind the desk when I told her where I came from. At the beach you’re asked to wait in the open air restaurant for the next scheduled tour and where they ask where you’re from again.

Overhearing the others who arrived at the restaurant in the shade of the giant Sanctuary; they were a mix but American and Japanese mainly. While waiting I observed a gargantuan woman sounding Russian, waddled from her chair accompanied by a man half her size over to a horse and carriage, before being driven away into the bright sunlight. The restaurant advertised Western dishes such as fish and chips but seemed reluctant to take any orders, perhaps used to the premises being used by hundreds of visitors waiting for the tours to begin.

According to the tourist pamphlet the Sanctuary is “not only a replica of an ancient art, but also power of contemporary creation.” The building is huge and surreal, almost macabre to look at. The site covers 3200 square metres and at its peak the top of the Sanctuary in 105 metres high.

The style of the Sanctuary is presented as being reminiscent of Khmer architecture, displaying hand-carved wooden sculptures suggestive of the imperial themes of ancient Angkor. It has four towers or gopura, respectively representing images from the Buddhist and Hindu religions and mythologies of Cambodia, China, India and Thailand.

I was reminded of the castle home on Living Island of the wicked witch named Wilhelmina W. Witchiepoo from the set of H.R. Pufnstuf, a children’s television series featuring California’s own version of the struggle of good versus evil. I could almost see her flying around the spires of her castle, a living, talking entity, on her favoured mode of transport, the Vroom Broom. I half expected to see Banshees flying about, the portents of death from Celtic and Norse mythology, though out here they’d get badly sunburnt. 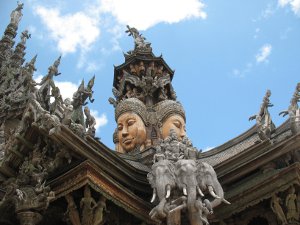 Like Gaudi’s Sagrada Família, the Sanctuary of Truth is a work is progress. To enter the building, you have to first don a white hard hat. Once inside you can take the offer of a tour guide or wander about on your own. As a guide is not compulsory is a wonder that the make you wait outside for a tour to start.

Unlike Gaudi’s magnificent eponymous Catalan legacy, it’s debatable if the Sanctuary is a wonder or not just a bit tacky.  The best that can be said, in truth, is that it’s intriguing. It’s certainly hard to take your eyes off up close and when viewed from distance, has that “what on earth is that?” factor about it. Given the contemporary setting you’d have to say that it’s a bit bizarre, surrounded by all those tower blocks and just streets away from rows of wooden shop houses, markets and the highway buzz of modern day traffic.

Work on the Sanctuary is scheduled to be finished in 2025. In parts of the interior scaffolding climbs all the way to the massive ceiling, and steel ladders climb the walls which run to the height of a cathedral. Large pieces of wood, some weighing hundreds of kilos lie about waiting to begin the carving process or in some instances, half completed a face here, a feature there.

The Sanctuary is the equivalent height of a 20-story building. Inside the wood is so dark as to make many of the features indistinguishable. A pity, as many of the carvings intricately worked by craftsmen, are reminiscent of those to be found on base reliefs at many of the ancient temple sites throughout the region. So long as work being going on that some of the exterior wood has bleached in the topical sun, and being adjacent a beach, it no doubt becomes blasted with salt from sea spray.

At the entrance to one of the wings I paused at a large inscribed sandwich board. “This work indicates that humans are only dust in the universe and will ultimately become one with it. Physical beings deteriorate, ravaged by the time, but truth and goodness are immortal. Materialistic pleasure is a superficial physical and eternal joy. True happiness is found in intrinsic spiritual pleasure.”

Interesting phrases, given that the Sanctuary is located near to Pattaya, one of Thailand’s more notorious “Sin Cities”, though these days it’s much given over to package tourists and families from the Indian Subcontinent and Eastern Europe. All of whom are much indulgent in materialistic pleasures to be found in the city’s many shopping malls and markets.

The steps outside were lined with carvings of nubile women, probably more fitting given the Sanctuary’s location, though not dissimilar to some of the more monastic sites at Angkor in Cambodia or Phimai near Khorat. Perhaps because the Sanctuary is where it is located I thought the carvings more reminiscent of sirens, willing passing sailors to drive their ships onto the rocks nearby.

Aside from the restaurant behind the Sanctuary, there is a cliff top establishment near the top of the steps descending to the beach. Service was slack, almost as if they were disinclined to cook or unbelieving someone would want to eat there. The food matched the service but the view was inviting.

The Sanctuary of Truth Banglamung near Pattaya, it’s wonderful, weird and wacky.