Northeast of Bangkok is Nahkon Ratchasima, capital city of the province of the same name, and lauded as the gateway to the great northeast of Thailand. This area is known as Isaan and home to 25 million people; a country within a country, the rice bowl of Thailand, and the poorest region in the land.

The city, also called Korat (or Khorat) a combination of both Nahkon and Ratchasima, is 260-kilometres from Bangkok and can be reached by bus, train and plane from the Thai capital. The motorway system in this part of Thailand is fast, a product of US-inspired design during the 1960s, when their air force used the city as a base for its B-52 operations in the war with Vietnam. 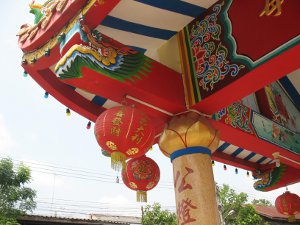 Traditionally, Nahkon Ratchasima has sat astride the division of Thai and Lao cultures on the western edge of the sun baked Korat Plateau. Today the area is regarded as bi-lingual and bi-cultural and also retains a strong Khmer influence.Much of Isaan makes a mockery of the concept of modern geo-political boundaries.

International tourism to Nakhon Ratchasima is still relatively new, and as such there are not yet many international hotel brands. This is changing, and new boutique and other 5 star hotels are opening. The province, rich in Khmer culture, is a popular destination for Thai tourists exploring their own country, and increasingly, foreigners and expats looking to get away from Bangkok, and alternatives to the usual fare offered tourists.

English is not widely spoken in this part of Thailand where most people speak passa Issan. Many of the words are similar to central Thai but it is closer to the language of Laos. In south Issan there is a still a Cambodian influence on the language.

Prior to the fourteenth century, the area of Nakhon Ratchasima was under Khmer rule as was Phimai, 50 kilometres away and site of a temple complex similar to that of Angkor, though on a much smaller scale. During the late 17th century, the king of Ayatthaya, Naria, ordered the building of a new city to strengthen his kingdom’s northeastern frontier. Today the remnants of the city walls can still be seen with four giant gates, which were to be closed in the event of attack, usually when the Burmese threatened.

As tall and imposing as these defences are, they failed to prevent the destruction of the Ayutthaya kingdom by the Burmese in 1767. In the late 18th century, a Thai general, the part-Chinese Thong Duang, became King Rama I of the successor Thonburi kingdom, the founder of the current Thai Chakri dynasty; and Nakhon Ratchasima became his strategic stronghold on the northeastern frontier over the Lao and Khmer tributary states.

In 1826, the king of Vientiane, Chao Anouyong, launched what was to become the Laotion Rebellion against his Siamese counterpart King Rama III, a struggle that was to wage violently for two years. The wife of the deputy governor at the time, Thao Suranari also know as Khunying Mo or “Lady Mo”, is credited with having freed the city from Anouvong's army, and has been honored with a statue in the center of downtown Korat. The old, walled town east of the monument complete with a moat, was designed and built by a French engineer who is believed along with Italian and Portuguese builders to be behind the construction of King Narai's Palace at Lopburi, a town with its own set of Khmer-style ruins.

Nakhon Ratchasima continued to be an important political and economic centre in Thailand during under subdivision of the country at the provincial level during the so-called Monthon administrative reforms of the late 1800s.

The city’s significance continued through the political turmoil which has continually afflicted Thailand over the years. In 1933, Nakhon Ratchasima became the headquarters of the Boworadet Rebellion, an abortive uprising against the new government in Bangkok. Thai military coups dot the political landscape and have regularly featured in the city’s history, as have some of the main players.

One general, Manoonkrit Roopkachorn, a member a clique of Thai high ranking officers, has taken part in several coups including the attempted effort of Aprul 1981, when the entire Thai government and the royal family took refuge in Nakhon Ratchasima. 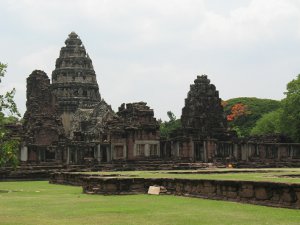 Outside the city the main attraction are the temples of Phimai. You can reach Phimai from Nakhon Ratchasima by public bus for 50 baht, a journey which takes about an hour. The entrance fee is 100 baht. There is a visitor’s centre which is informative and well laid out with displays in English and Thai, and interactive displays, explaining the history and significance of Phimai.

The complex, known as Prasat Hin Phimai is one of the biggest and most important religious sanctuaries found in Thailand. It was build around the 11th and 12th centuries AD with further additions made in the 13th century. The ancient city of Phimai is located in the current town of Phimai. The old town walls measure 565m by 1030m and are rectangular in shape. They are surrounded by a moat with the Mun River on the north and east sides, the Khem Stream on the south, and the Chakarat River on the west flowing to meet the Mun River.

“Phimai” is probably the same word as “Vimaya” the latter appears in the inscription on the door frame of te southern entrance of the inner wall. It is believed that Phimai is an ancient town that has existed since the time of the ancient Khmer Empire and its communities and societies have developed progressively since then. 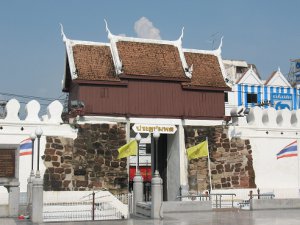 The Thai Department of Fine Arts has undertaken the restoration of site since the gazetting of Phimai by the government in 1936. Major restorations were carried out between 1964-1969 as a joint project between the Thai and French governments. The Phimai Historical Park was officially opened in 1989.

The grounds are very clean and will maintained and unlike its larger relative, Angkor in Cambodia where tourism has reached unsustainable levels to the detriment of the temples, Phimai by comparison is well maintained. The only other visitors I saw were Thai, some of whom had travelled across the country just to come and see the site.

A few hundred metres from the temple complex is a 350-year-old banyan tree with a canopy covering some 3250 square metres. A colourful spectacle as the trunk and branches are covered in giant ribbons spread across the spectrum of rainbow colours. 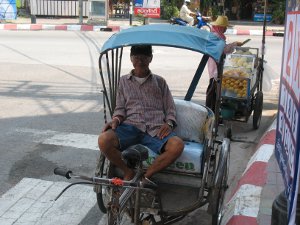 Nakhon Ratchasima has a thriving commercial sector with a number of more traditional markets, and the more recent additions of Thailand’s great shopping malls, vast characterless complexes teeming with customers and including facilities as events halls, theatres and swimming pools. Like the ubiquitous multinational convenience stores that now dot Thai streets, they are the death knell of family businesses and traditional Thai shopping.

Outside the city on the highway to Bangkok are large industrial sites headed by the area’s flagship, the US-owned Seagate electronics factory, employing thousands of locals and indirectly through them, thousands of their dependents. Many of the factory’s workers are housed in utilitarian apartment blocks of the same bland grey colour, reminiscent of some Stalinist housing estate.

Nahkon Ratchasima may be quieter than Bangkok and prices cheaper, but the city hasn’t escaped that modern facet of Thai life, traffic jams. Everyday, the eight-lane main road through town is jammed bumper-to-bumper with all manner of vehicles, going nowhere fast.

Vehicles cover the whole range of time and technology from traditional cyclos, tuk-tuks in colourful designs, songtheaws – modified pick-ups which Thais can pack with about 20 passengers, air-conditioned taxis, to pick-ups usually the Toyota Hilux called Vigo in these parts, and boy racers. Even some of the motorbikes have been modified substantially. 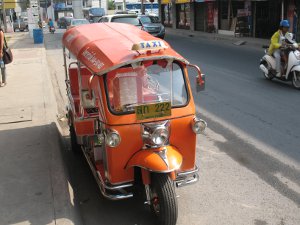 One night having a meal at a quiet local restaurant, our food was loudly interrupted by the testing shop next door for car boom boxes, a extreme decibels. At 9pm in a semi-residential area in a Western country, this would have been curbed by noise regulations, but in Thailand, people sit there seemingly unperturbed by enough volume to inflict a permanent shift in hearing. During a brief respite which made conversation possible, the locals on our side of the fence explained that “words had previously been exchanged” between the two parties over this continuing aural assault. No shit I thought, the restaurant crowd must have the patience of saints to endure such a situation.

At the George Pub, the English teacher standing in for the owner explained there were a few farangs in town. Many older expats come to Nahkon Ratchasima for the cheaper living costs, and can be seen wandering the shopping malls with their much younger Thai partners in tow. I had a game of pool at the George and was astounded to be charged for it, 10 baht, the first time I’ve ever had to pay for a game in Asia. The music was loud, a few farangs sat about outside drinking pints and talking about football, and life outside Nahkon Ratchasima and Thailand, which always make me wonder why they are here at all.

Far away from the beaches and bungalows most tourists come to Thailand for, Nahkon Ratchasima is well worth the effort if you want to see more of what Thailand is really about.

I will be sure to bookmark it and come back to read extra of
your helpful information. Thank you for the post. I will certainly return.
Quote
#2 Guest 2015-07-21 21:06
WOW just what I was searching for. Came here by searching for critical journeys
Quote
#1 Guest 2014-10-23 15:22
Hi I am so excited I found your web site, I really found you by
error, while I was researching on Aol for something else,
Regardless I am here now and would just like
to say cheers for a remarkable post and a all round exciting
blog (I also love the theme/design), I don't have time to
look over it all at the moment but I have
bookmarked it and also added in your RSS feeds, so when I have time I will be back to read a great deal more, Please do keep up the great job.
Quote
Refresh comments list