New years are big and plentiful in Cambodia, they recognize three in total; the international day; Chinese New Year and the Khmer New Year of these the latter two are by far the more celebrated, all these in a country already awash with public holidays.

The Cambodian New Year or Chaul Chnam Thmey, which in Khmer literally means “Enter new year”. The holiday lasts for three days beginning on New Year's Day in mid-April, this year starting on Friday 13th, and which marks the end of the harvesting season, though shops and businesses often stay closed longer.

For Khmer New Year, Cambodian flock back to their provinces in huge numbers, choking roads and booking out hotels, leaving bemused tourists to wander largely deserted streets and congregate in riverside bars. 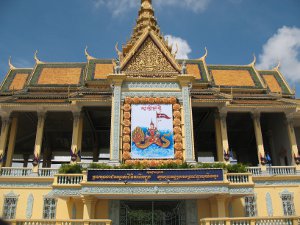 As many Khmers flock to their hometowns, the inevitable complaints of price hikes and border bribes have started pouring in like clockwork. The traffic police are infamous for their sudden enthusiasm for generating revenue with the New Year beckoning. Phnom Penh streets are coveted by gangs of the blue-shirted plague stopping motorists for on-the-spot fines for some imaginary offence.

I was stopped on my motor bike by half-a-dozen of these guys, two grabbing my handlebars as if to prevent me fleeing, and thrust a flyer written in Khmer under my nose. They demanded $50 to be paid immediately, an outrageous sum equivalent to a month’s pay for an officer. The price quickly dropped to $20 when I was asked if I had a Cambodia driver’s licence. “Who does?” I replied, a fair enough question, but this was just a revenue collecting exercise unlikely ever to make the national coffers. In the end handed over whatever small bills I had in my pocket, fearful of opening my wallet in their presence as they would’ve taken the lot.

Transport providers and border police join in the scam. Passengers arranging transport to the provinces found that bus companies and taxies had raised their prices despite a directive issued by the Phnom Penh governor last week to keep prices down. A ticket to Siem Reap province for example, had increased by almost 40 percent from the usual 25,000 riel (US$6.25) to 35,000 riel ($8.75).

Meanwhile, Cambodian workers returning from Thailand for the holiday alleged that border officials were demanding bribes. Some workers complained that they were asked to pay 10,000 riel ($2.50) “tip” at some border checkpoints, though officials claim no such practice exists at “official” crossings.

The three days of the New Year are Maha Songkran, Virak Wanabat and Tngay Leang Saka.

Maha Songkran is the first day of the New Yea celebration. In Thailand this is celebrated with street parties where everyone including passers-by are drenched in water, including tourists, and has become popular with the backpackers, the Lonely Planet brigade.

The second day of the New Year celebration is known as Virak Wanabat, when people contribute charity to the less fortunate by helping the poor, servants, homeless, and low-income families. Families attend a dedication ceremony to their ancestors at the monastery.

Tngay Leang Saka is the name of the third day of the New Year celebration. On this day Cambodians flock to pagodas to pray, burn incense, offer alms and on the third day of the Khmer New Year place link and white lotus flowers before statues of Buddha. They then bow three times before large urns filled with incense and bury 10-riel notes. Each year Wat Lanka, one of Phnom Penh’s five original wats (pagodas) and founded in 1422, earns about $750 this way, which goes towards the upkeep of the building.

In a traditional New Year activity, five piles of sand are shaped into mountains on the grounds of pagodas where believers place incense stick and money. In return, the person making the offering takes a handful of the sand and sprinkles it over the offering. This is a Khmer tradition to absolve your sins and bring happiness and good luck.

At Wat Lanka, the five sand mountains represent five stupas, the largest a heavenly stupa where Buddha’s hair and diadem – an ornamental crown – are believed to be buried. The other four piles represent the stupas of Buddha’s favourite disciples. People also bring food to the Wat by worshippers beginning at 6am, which the monks disperse among the needy and any leftovers goes to the hospitals.

It is the ending of the year and the beginning of a new one.

In Cambodia, this is much played down and families spend the time together. When a Thai visitor to Siem Reap, a Red Shirt on a mass visit with 30,000 Red Shirts there to hear their leader the former Thai prime minister, Thaksin Sinatwatra, asked where all the water festivals were, his host Khmer family replied that most were at home with their parents.  For in Cambodia, people wash their face for good luck with holy water in the morning, their chests at noon, and their feet in the evening before they go to bed.

After the speeches, the Cambodians threw open the gates to the ancient wonder, Angkor Wat, free of charge to the Red Shirts, at an estimated cost of $800,000 in lost gate charges.

According to ancient documents belong to the Puthisasanak Bondith, Sraung Preah began when a king had his followers build a prayer hall on the riverfront in reverence to Buddha. After receiving Buddha's blessings, the king asked Buddha what he should do as a good deed for the New Year. Buddha replied that if children purify their parents with water, then their name would be inscribed on a golden scroll. The scroll would give them the merits of nobility. And so the ceremony of Sraung Preah began.

In recent years it’s been noted that although youth participation in the tradition remains strong, younger Cambodians appear confused over the true meaning of the ceremony.

After last New Year, local media and government offices were filled with reports on traffic accidents. The Phnom Penh Post and a report made public by the Ministry of Interior stated that spanning the 13-17 of April 2011, traffic accidents caused 58 fatalities and 484 injuries, and for 2012, 48 dead in 165 accidents with 344 injured.

In a mixing of Thai politics visited upon Cambodia and the New Year road mayhem, a bus carrying Thais was involved in a fatal accident on route to the border crossing at Poitpet, killing the Cambodians travelling in the opposite direction.

Unsurprisingly, motorbikes are the most common vehicle involved in traffic accidents; Phnom Penh alone has some 900,000 of them in a city with a population of 1.2 million. But overcrowded taxis also play a large role in the danger – and perhaps have a bigger impact – since such a high volume of passengers, some of whom travel unsecured on the roof, are involved in the accident.

Traffic accidents, along with HIV/AIDS, are now Cambodia’s biggest killer and cost the country an estimated $284 million.

While alcohol plays a part in the country’s New Year tragedies, it also fuels drunken rages involving firearms, some of them involving high-ranking people.  Over the New Year, a secretary in the prime minister’s cabinet has been charged with illegally using a weapon and “anarchically” shooting on the street in the city at night, at least the third such incident in April involving drunk officials opening fire with their weapons. Other incidents have included police and armed forces’ officers.

So in the international New Year it’s 2012, and in the Chinese New Year, it’s the Year of the Dragon, and in Kampuchea, it’s just another year where everyone looks forward to having a holiday.