In a land dominated by agriculture where the monsoon is both too hot and too short, water comes to dominate living for most Cambodians caught between floods and drought. In northwestern Cambodia this feature of society manifests itself in the form of rain gambling.Although gambling on rainfall is a casual pastime in other parts of Cambodia (and indeed in Asia), in Battambang this has taken on extreme forms.

Battambang (pronounced Batdambong), is a riverside town and home to some of the best-preserved French colonial architecture in Cambodia. Situated on the meandering Sangker River, the town is officially home to a quarter of a million souls and the country’s second city, but it has more a sleepy provincial town feel. 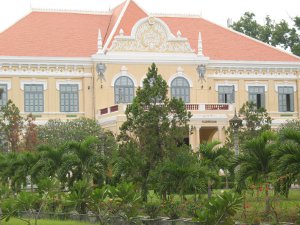 Here, Battambang boasts the largest and most sophisticated rain betting market in the country, complete with bookies, near-professional gamblers, and participants by the thousands. As the clouds change, networks of devoted sky-watchers call contacts from as far as Pailin, a remote frontier town on the Thai border and previously one of the last strongholds of the Khmer Rouge.

The rain-betting day is divided into three parts: breakfast until noon, noon to 2 pm, and 2 pm to 6 pm. A bet, starting at $2, yields a pay-out if it rains during the chosen time period. Betting on precipitation during the normally dry mornings is riskier, but offers a massive payoff. But it's relatively safe to assume that it will rain before 6 pm at the height of the wet season, so winning bets on the third segment of the day bring in paltry returns. 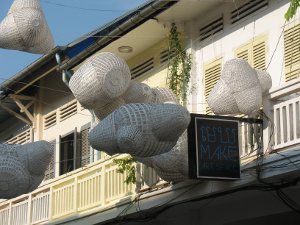 Officially, all gambling is illegal in Cambodia, so the bustling rain betting networks are wholly underground, and the participants perpetually wary about the prospect of crackdowns. People talking about rain gambling refuse to be named, alluding to the regular bribes paid to local police, and to the media who demand money for not publishing articles about them.

Battambang is 300 kilometres by road from the capital Phnom Penh along National Route Six, the main land route to Thailand. The bus journey takes about seven-and-a-half hours with regular stop-offs and allowing for the vagaries of land transport in Cambodia, which can be bewildering, intriguing and at times, downright dangerous, if not lethal. Only one of Cambodia’s 30 or so bus companies was not involved in a fatal crash in 2011. Unfortunately, Cambodia’s safest bus company doesn’t travel to Battambang, so you take your chances.

For years Battambang was off the map for road travellers, but facilities have recently been improved and it makes a great base for visiting the nearby temples, such as Phnom Banon and Wat Ek Phnom, as well as the close by villages. To me it’s like quaint Kampot, another colonial time capsule, but maybe with more to offer. 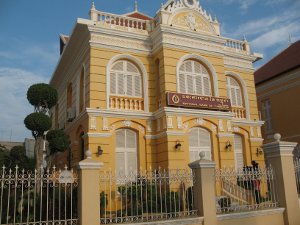 The woman sitting next to me on the bus was South African but lives in Singapore. On her first visit to Cambodia to research a PhD. For her the Cambodian countryside was far from the lush tropical landscape she’d expected. Having lived for 20 years in Perth she said it was more like Western Australia.

It was the dry season and the parched and fallow rice fields were bleached by the Cambodian sun which beat down like a hammer, no place for man or beast. In the fields I saw an indicator of development in Cambodia, a tractor, turning a rice field in minutes what would have taken a farmer most of the day to do by more traditional means. Outside town there was a workshop servicing several more and selling two brand new machines.

Founded in the 11th century by the mighty Khmer Empire, Battambang is well known for being the leading rice-producing province of the country. The province is largely pancake flat and from a rare hilltop the rice paddies stretch off into the hazy distance, as far as the eye can see.

Historically, Battambang has see-sawed back and forth between Thailand (formerly Siam) and Cambodia. For half a millennium it was the main commercial hub of Thailand’s eastern provinces, though demographically it was always predominantly Khmer with a melting pot of ethnic Vietnamese, Lao, Thai and Chinese. Today, Battambang is still the main hub of the Northwest. 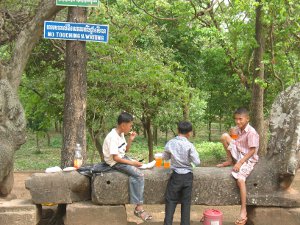 French colonialists developed the urban layout of Battambang is a series of public works including the distinctive grid pattern of the streets, public buildings, railways, and of course to keep the locals in line, military establishments and prisons. Fortunately for the Khmers, French rule in Cambodia (Cambodge) was far more benevolent that in neighbouring Vietnam, where torture and execution were routine.

The network of charming old French shop houses clustered along the riverbank is the real highlight here, and there are a number of temples scattered around the town, together with a surprisingly high number of Christian churches of many denominations.

The town’s former governor’s palace is stunning and looks like it belongs in the French Riviera. The National Bank building on riverside is resplendent in pastel yellow with sculptured trees and white shutters and all around town there are reminders of the French, heir architecture blended with traditional shop houses common throughout Asia. 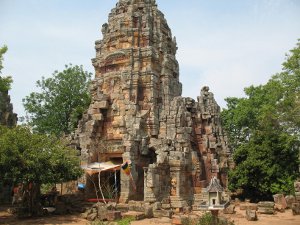 For a few dollars you can tour the countryside outside town and visit some of the local highlights including temples, wineries, novel railways, and Battambang’s place on the genocidal tourism list, the so-called Killing Caves at Phnom Sampov. There’s even the unusual feature of the deserted Pepsi Cola plant built during the sixties despite Coke’s monopoly in Cambodia, to supply the Thai market. The whole building was closed down by the Khmer Rouge and turned into a rice factory, but today it still has ghost-like stores of sixties-era Pepsi produce.

Cambodia’s rail system has fallen into disuse, but in Battambang there is the bamboo rail (called the Nori), a pick-up and carry bamboo flat platform mounted on tiny wheels and powered by a small engine. The line is 10 minutes outside town and rides cost $10 for up to four people, but later in 2012 the line is being dismantled to make way for a road.

My driver, Chin Chin, took me along dusty village roads where the riverbanks are planted with eggplants, chilies and pumpkins in the dry season before being harvested in June when the river levels rise. It seemed to be the wedding season and almost very village had a marquee decorated with coloured ribbons and belting out rock music or traditional Khmer ballads which could be heard way out across the landscape.

At Banan Temple you pay $2 for an entry ticket which also gets you to Phnom Sampov and Ek Phnom Temple, if you go that far. Banan is an Angkor-era temple atop a hill (phnom), an exhausting 400 or so steps above the flat plains in the midday heat. When I got there I found the temple flocking with German tourists complete with German speaking Khmer guide.

All the temples were posted with danger signs, doubtless because the structures are likely to fall over in a thrice in any sort of wind. Everywhere there were reminders of the dangers as the ground is littered with fallen sandstone blocks. In some places they’ve been put back but invariably in the wrong place as indicated by the colour and carvings being disjointed and out of sequence. On the far side of this small temple complex, a red sing warns visitors of another danger, that of land mines, a legacy with which the whole of Cambodia is blighted.

Despite the signs warning you off, local children lounged about on the ancient stonework, soon joined by the Germans, who posed for photographs. Back at the bottom of the hill I saw an older Cambodian man in long black trousers stripped to the waist, his body was taunt and wiry. His muscular back dominated by a series of black tattoos in parallel formation running down each side of his spine.

I always look at people Cambodians who must’ve been old enough to have lived through the Khmer rouge era and the wars either side which dragged on for decades, amazed at what they have endured.

Battambang was a Khmer Rouge stronghold and centre of the ongoing conflict following the Vietnamese invasion in 1979 which pushed the genocidal regime out of Phnom Penh. Until the surrender deal of Ieng Sary (Brother Number Three) based in Pailin where he ruled a fiefdom with a regiment of KR soldiers for protection, Battambang was the Khmer Rouge stronghold in the region.

To get to the Killing Caves from Banan, Chin Chin headed his vehicle out along a rasied and rutted dirt road, barely wide enough for two vehicles and rough enough to threaten to bounce his tuk tuk and me into the paddy fields.

Tuk tuks in these parts are a 125cc motorbike towing a four seater carriage, grossly underpowered and not best designed for off roading. I was amazed that the engine didn’t seize before the journey ended. For $2 you can hire a local to take you up the hill on their bike and for another dollar they’ll take you done again, but they don’t tell you that until you are at the top.

At Phnom Sampov the Khmer Rouge rounded up and killed hundreds of cadres, smashing their skulls and hurling them from the hill top into the deep caves below. In some kind of disturbed psychotic methodology, they threw the bodies of all the children into a small cave and all the parents and adults into a larger cavern. Inside the air was stale and stank of bat droppings.

A macabre collection of skulls and thigh bones was held in a small golden shrine at the bottom of a series of steps where a man lay on a bamboo mat. I was amazed he could sit there all day and breathe properly given the poor quality of the air. Elsewhere on the summit are a series of 20th century temples and another from this century nearing completion.

While my moto man when off to get gas I sat a talked with a Buddhist monk, Bunleang but everyone calls him Kleang (Klang). He asked if I was married and I said no. He informed me then that I only had one problem, me, and that if you are married then you have another problem, and then another with each child and so on. He ran a school with over 300 children and wanted native English speakers to volunteer to teach them in return for room and board as h couldn’t afford to pay.

I wondered what had brought him to the priesthood. He told me that before he’d been a mechanic but had had drug and alcohol problems. After one especially bad time with his demons lasting one month, the monks had taken him in and he’d been clean now for ten years.

On one day I was there it rained at about 4pm preceded by wind gusts and the power of lighting, displayed across the sky in horizontal bolts. It being the dry season someone must have made some money.