If you’re planning on experiencing the marvels of river travel to Cambodia from Vietnam on a budget, tour operators on both sides of the border will quickly dispel your notions of wonder and romance. Instead you get a two-day ordeal, much of it by road, and punctuated with a stay in a grimy hotel amongst the poorest I’ve seen in Vietnam.

Pity then as Vietnamese hotels are generally good value for money, and the Mekong Delta a cultural and natural wonder. But if you make your travel plans for upriver cruising in Saigon’s Pham Ngu Lao district, you’re in for a disappointment.

The Delta is a web of waterways and rice paddies covering 60,000 square kilometres and punctuated by dry, dusty towns across three provinces of southern Vietnam west of Saigon. The region is the so-called “rice basket” of Vietnam as it produces half of the country’s rice crop, and is densely populated with 17 million souls, most engaged in agriculture and fishing.

Rich and fertile, the land now produces up to four rice crops per annum hard work then, as rice is a tyrant. Previously impoverished the Delta region benefited greatly from the Doi Moi reforms from 1986, turning Vietnam much like China, into a free-market economy under one-party communist rule.

Having previously flown over the Delta, the land is largely pancake flat and made up of thousands of rice paddies. Vietnam is the world’s second-largest rice exporter after Thailand. Waterways criss-cross the terrain. Canals, lined with houses, in some places stretch dead straight for miles. The lush plains are also home to sugarcane, fruit, coconut and shrimp.

This is the region where the mighty Mekong ends its journey from the foothills of Tibet at the South China Sea.  So large is the Mekong, that the river has two tides per day. The sediment deposited by the Mekong formed Cambodia, a process that continues today with silt extending the coastline of the Delta by up to 80m per annum.

The boat trip begins by bus, or, as is the case taxi, in the form of a people mover already chocker with Vietnamese, so I sat on an upturned crate with a cushion attached. The 7am pick-up from Pham Ngu Lao turned out to be 7:45am where upon we drove the streets of Vietnam’s biggest city at peak hour in order to empty the wagon, save for the farang. Frustrating this, for as soon as the taxi was empty we began picking up passengers again.

The only use of this exercise was that it afforded a non-tourist look at Saigon, a city at the pinnacle of Vietnam’s revival. There are grand colonial buildings; the main post office is a wonder, as are the town hall and the opera house. There are high rises aplenty including the Bitexco Financial Tower, at 262m the tallest building in Vietnam. But the growth is uneven. The Saigon River is lined with slums, grim packed corrugated iron structures built on stilts with the barest amenities.

Saigon’s traffic is hideous but not the worst in Southeast Asia. I haven’t seen Manila, but Jakarta is the pits. At least Saigon’s traffic moves as the massed ranks of motorcyclists swarm like locusts and occupy one side of the city’s one-way systems in the CBD, the other side of the road being reserved for larger vehicles. Traffic lights are observed and the city has introduced traffic wardens at intersections to assist people crossing the road, least the tourists are too scared to step out from the safety of the pavements. 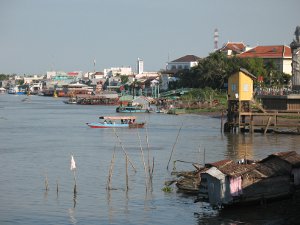 My bus was scheduled to leave from a narrow back street at 9am. The small waiting room was awash with fridges and motorbikes and packages wrapped in black plastic secured with enough tape to cover the walls. I had to carry all my bags on board, the luggage compartments reserved for the aforementioned items, which meant a cramped trip.

Chau Doc is six hours by bus from Saigon, no short trip. Buses in Vietnam are modern and better than the hand me down wrecks still found across the border in Cambodia. The motorways surrounding Saigon soon gave way to narrow roads through rice fields and bridges over the many waterways.

The Can Tho Bridge across the Mekong is a structural behemoth and the most expensive bridge in Vietnam. Six lanes wide and almost three kilometers long, one of 17 intended to interconnect the Delta. It has a 40m clearance for shipping and so steep it’s like driving uphill.

We had the obligatory pit stop for lunch at a restaurant crammed with Vietnamese, their children and local dogs. I was the only foreigner.

Chau Doc town itself is located on the Hau River, a branch of the Mekong. The area was once part of the Kingdom of Funan, which ruled much of southern Vietnam and Cambodia. The area has been part of Vietnam for 300 years.

The travel agent in Saigon booked me a room in a hotel which turned out to be full. A moto rider offered to take me there from the bus stop for one dollar. A bargain I thought, except that the hotel was only about 100m from the bus stop around the corner out of sight. I should’ve known something was up when the travel agent told me there was courtesy bus at Chau Doc for this purpose.

The area around Chau Doc has had a recent bloody history. In 1957 the Viet Minh fighting the Diem regime machine-gunned 17 people sitting in a bar. Their successors, the Viet Cong used the area as a stronghold during the American War.

A remnant of the brutality of that period is now a tourist attraction. Tuc Dup Hill in the so-called Seven Mountain region, 35kms from Chau Doc had served as a strategic base of operations for the Viet Cong during the American War. US forces attempted to prevent cross-border aid from Cambodia with such ferocity the hill was called the “Two Million Dollar Hill” due to the amount of ordnance the US military visited on this site. Despite these efforts, the Viet Cong remained unmoved throughout a 128-day battering when the hill almost met the fate of other areas in the Delta including Ben Tre where the Americans “…had to destroy the village in order to save it.”

Worse was to come in 1978 when Khmer Rouge forces murdered 3100 people in the Ba Chuc Massacre, one of a series of events which precipitated Vietnam’s subsequent invasion of Pol Pot’s Democratic Kampuchea.

Nearby Sam Mountain is the highest point in the Delta. There are dozens of pagodas and temples around the base of Sam Mountain, the most famous is Bà Chúa X, which attracts droves of pilgrims annually to shower the temple’s leading lady, Chúa X, with elaborate gifts. Moto riders from all over Chau Doc will offer to take you there for the sunset or sunrise.

Boat passengers meet in a hotel restaurant for breakfast at 6am. The majority are fast boat passengers who leave first travelling on Chau Doc’ bicycle tuk tuk to the pier to meet the boats.

The slow boat to Cambodia is a sleek vessel with a row of office chairs down each side. There’s a guide and a captain. Thankfully there were only three passengers, myself and an Australian couple. The fast boat is packed. On route we stop at a fish farm and a Cham village. 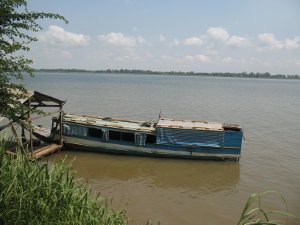 The fish farm is under a floating house and measures 60m by 20m, and depending on the market fish sells for 12,000-75,000 dong (US$1.20-3.75) each. If there’s flooding the prices are forced down, more fish less money. The guide threw in some pellets which produced a feeding frenzy amongst the captive hoards.

Cham villagers live a hand-to mouth existence. If they have any money it’s not obvious. The house marked out the height of flood waters over the various years. Underneath in the flood zone a woman on a hand operated loom weaved sarongs and scarves. Access from the river was via a rickety bamboo walkway barely capable of supporting someone of my weight.

The Australian couple had come away armed with all imaginable digital media entertainment paraphernalia. With their travel cushions and headphones, smart phones, laptops and tablets I don’t think I ever saw them look out at their surroundings. Watching sitcoms they could’ve been anywhere, which made me wonder why they had bothered to come at all.

After detouring through various canals off the main riverways we reached the floating Vietnamese border control and everyone from the boats, fast and slow were herded into a restaurant while the guides disappeared off into officialdom to arrange exit stamps.

Here the Mekong is about 2kms wide. What the river giveth, the river taketh away. After spending centuries providing the land that is now Cambodia, the riverbanks are being eroded by the very waterway responsible for their creation in the first instance. So fast is the process that the cornfields are disappearing at the edges before the crop is harvested. 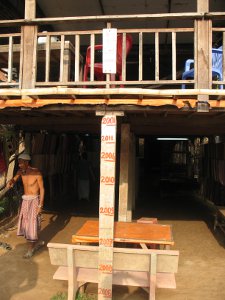 The guides are supplementing their income with some import-export of ginseng tea, fish sauce and other items in mysterious black plastic bags.

The boat journey to Phnom Penh sadly ends with a van ride, the minibus parked in a field surrounded by water buffalo. The cowhands seem nonplussed at the sight of farangs and their baggage making its way across the riverbank. On the road to the Cambodian capital, the van driver stopped in riverbank villages, themselves likely soon victims of the erosion to dispense the import items.

The last part of the river journey is on a crowded road where vehicles jockey for position on the road and it’s not uncommon to see three vehicles abreast coming at you from the opposite direction, all vying to overtake each other.

A pity that the peace and tranquility of river travel is rudely interrupted by the mayhem of Cambodia’s roads.

#2 Guest 2015-10-14 01:24
We are a group of volunteers and starting a new scheme in our community.
Your web site provided us with valuable info to work
on. You have done an impressive job and our entire community will
be grateful to you.
Quote
#1 Guest 2014-08-05 19:53
Pretty nice post. I just stumbled upon your blog and wished to say that
I've truly enjoyed browsing your blog posts.
In any case I will be subscribing to your feed and I hope you write again very soon!
Quote
Refresh comments list