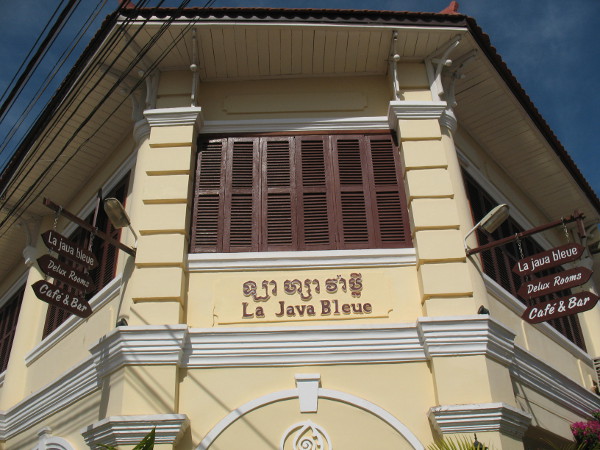 On the city scale of things Jakarta rates as a megalopolis. Its population is currently estimated at 10 million but depending on where you draw the boundaries of Indonesia’s capital, the larger metropolitan region has up to 18 million souls with predictions that the total population will top 30 million in just a few years.

Jakarta is a heaving mass of humanity. Expats nicknamed it “The Big Durian” because, though widely referred in Southeast Asia as the king of fruits, its sight and smell (guests are banned bringing it into some hotels) can put you off. There are the very rich in their apartments with luxury cars who shop in Jakarta’s cosmopolitan malls, and beggars and slums to rival Kolkata. There’s so much traffic in Jakarta it doesn’t move at all at times, coming to a complete standstill in one great gridlock. Traffic lights change from red to green and thousands of horns blast and vehicles inch, literally their way forward. 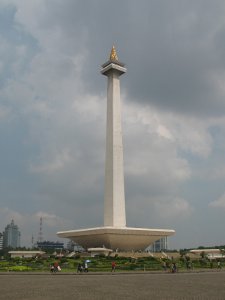 Motorbikes rival cars in numbers here, a rather unscientific measure of a country’s level of development. In more developed Thailand, cars outnumber motorbikes, in Cambodia however, poorer, it’s the other way round with motorbikes heavily outnumbering cars. Whatever the theory, it’s hard to see Jakarta absorbing anymore vehicles at all, they haven’t got enough room for the ones they’ve got now.

Thanks to all that traffic the city is heavily polluted. Fumes cover your skin in a black layer of particles and you’d wonder the merits of drying clean washing in such a place, as it would come back dirtier than when it went out.

Jakarta’s Soeharto Hatta Airport is 35 kilometres from downtown on a toll highway, but even that can be gridlocked. If you travel to the airport best allow at least two hours for the trip, and even that may not be enough on bad traffic days. The arrivals area is adorned with large portraits of Chelsea football players in full kit, sponsored by Samsung, whose products are advertised the length of the highway into town on huge electronic billboards.

Indonesia’s Lion Air is the major budget domestic carrier with a large fleet servicing all the major centres in this, the largest archipelagic state in the world. Flights are cheap and invariably full. They don’t have rows 13 or 14 for some reason and the female cabin crews, noticeably selected from the lighter skinned ethnic groups, seem to do almost absolutely nothing. The in-flight service consists of pushing a drinks trolley up and down the aisle, all the while avoiding eye contact with as many passengers as possible. The airline has a record of some near misses in recent years and flights rarely leaves on time, but they seem to get you there.

Jalan (Street) Jaksa is near Merdeka Square and Gambir Railway Station in the centre of Jakarta and a microcosm of Bangkok’s Khao San Road, the backpacker area. But if you come here looking for bargains and a good range of accommodation to suit your taste and budget, much like the rest of the archipelago, you'll be disappointed.

Hotels under about US$30 in Indonesian cities are a real lottery and the prizes aren’t great. You find yourself trading off features that at that price are taken as a given in Thailand, Vietnam or Cambodia, and settling for an overpriced room of mixed quality and few features; bathrooms especially seem to be a real issue.
Anything under $20 in Jalan Jaksi I wouldn’t put a dog in, including the wonderfully name Djody Hostel. The area is devoid of any character or charm, and you immediately start thinking about when to leave. 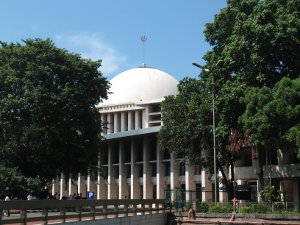 The Hotel Margot had box rooms for 250,000 rupiah (about US$27) and a café downstairs with overpriced beer, poor food and a malarial swarm of mosquitoes. There are also a few hookers floating about. The hookers are fewer in number than the mosquitoes and invariably operate alone, but like those flying bothersome creatures are there wanting to extract something from you.

When I arrived Liverpool FC was playing Manchester United live on the television. When I ordered some food the chef, wearing his German football shirt, turned and gave me the filthiest look. He was back with the food in as much time as it took to fry an egg and he promptly resumed his seat to watch the match. It was one of the fastest meals I’ve ever been served but impossible to eat without being bitten by mosquitoes.

Merdeka (Freedom) Square ocuppies a huge piece of central Jakarta, a pedestrian oasis from the city’s seething traffic woes. It’s dominated by the National Monument, a 132m high tower which affords views of the city, assuming you can still see it through all that smog. The tower was commissioned in 1961 by then President Sukarno as a symbol of the country’s independence hard won from the Dutch and after a brutal Japanese occupation. In weekends Indonesians queue in their hundreds to a ride to the top.

Jakarta does things big. Nearby Merdeka is the biggest mosque in Southeast Asia, the Istiqlal, Indoneisa’s national mosque, built to accommodate 120,000 worshippers. The minaret is 90 metres tall and visible across from the square.

On the north side of Merdeka is the president’s palace, a neo-classical low-level structure bright white in the sunshine. Contrary to travel advice it’s not open to the public. In fact you aren’t even allowed on the street outside and neither is any of Jakarta’s teeming traffic. If he can’t solve the traffic woes of Indonesia’s biggest city the president, Susilo Bambang Yudhoyono (or SBY), won’t be having it disturb him when at home.

The guard outside his house looked aghast when I wandered by. I noticed that his M-16 looked far from being ceremonial and was loaded, so I obliged when he told me to hurry along and not to take any photos.

On Jakarta’s pedestrian overpasses as the traffic with scores of late people movers shoots by underneath, people lie begging in the shade. One woman looked emaciated and was asleep (I think), her plastic cup held a few thousand rupiah, less than a dollar.

Transport in Jakarta is the full range from air-con metered taxis, Bluebird enjoy a good reputation, to guys on bicycles with padded seats who will give you a ride for a few rupiah. In between are fleets of diesel spewing buses, and noisy tuk tusk, and rail.

Jakarta has a long history and began life in the 4th century. It became an important trading port for the rich Hindu Kingdom of Sunda which ruled Java from the late 600s until about 1580 when it succumbed to pressure from the Sultanate of Banten, from northwest Java.

The first Europeans there were the Portuguese, who were soon overtaken in the region by the efforts of the Dutch, who sought to rival the maritime and commercial ventures of England. 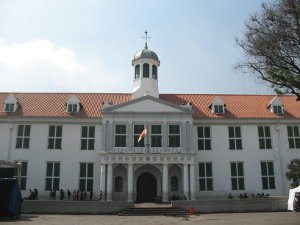 To do this they established the United East India Company in 1602 (the Verenigde Oost-indische Compagnie or the VOC), the second multinational company in the world, (the British East India Company was the first) which made huge profits, up to 1000 percent a voyage,  shipping spices from Indonesia to Europe until it went bankrupt in 1800.

The Dutch set up headquarters in the north of Jakarta, which they renamed Batavia, which Jakartans pronounce “Butta-via”. North Jakarta or Kota, is centred around the old port and Fatahillah Park, with its collection of museums and old buildings. The old City Hall is now the Jakarta History Museum. A market operates in the square which is bordered by terraced buildings cut straight out of Amsterdam.

Unfortunately, the Dutch decided to turn Batavia into a replica of Amsterdam, which is fine if you want bridges and buildings but not by digging canals, which simply turned into a breeding ground for malaria, claiming many European victims, earning the city the nickname of  the “White Man’s Graveyard”. Today the canals carry Jakarta’s sewerage, you can smell and see human faeces floating in the turgid water.

Opposite the history museum is the excellent Batavia Café, which has a Somerset Maugham feel to it, and is a welcome break from the heat, though you pay nearly $5 for a coffee. The building itself is an old Dutch trading house that has been converted into a colonial style bar and café with subtle lighting and lots of wood and framed photos everywhere. 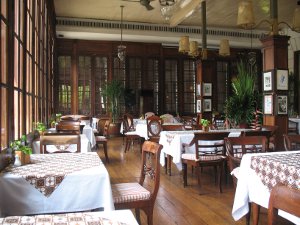 Most of the museums were closed on a Monday. The guide at the information centre told me the History Museum was open but for the morning the doors remained closed, so may be she got her days mixed up. Many of the old buildings in Kota are in disrepair, and look semi-derelict. The Maritime Museum overlooking a stagnant inlet of putrid water and stacked solid with rubbish was also closed. To get there, you had to cross a road jammed with trucks carrying containers. Nearby is the old VOC building, now a restaurant, nicely restored.

There’s a bustling nightlife, but it takes some finding. There are Dutch and English themed bars and discos for the beautiful people, and heavily male chasing female.

An Australian couple I met who were coming to the end of an 11 week Southeast Asian journey reported that Jakarta has amazing bookshops, which rivaled Borders in size. They were students at Monash University in Melbourne, he specializing in Indonesian studies, so for him this was a bonus.

My trip to Jakarta’s airport turned to near disaster when my taxi failed to show. The elderly Indian couple waiting in the lobby with me reported similar frustrations with Jakarta’s taxi fleet. The man, who I’d heard complaining loudly that his breakfast was cold, told me haggling in Indonesia was ridiculous, “they start way too high, and then call me arrogant because I refused to pay. I told them to look up arrogant in the dictionary,” he said. “The only thing they are interested in here is smoking” he added making the hand-to-mouth gesture of a smoker with his fingers.

I found another taxi. My driver, Mussa, apologized for the traffic jam. It was he said, the fault of the Democrats, though I’m unsure what this actually meant. Jakarta’s traffic woes aren’t confined to land. At the airport the pilot of the Lion Air flight said take-off was delayed due to there being “too much traffic on the runway.”

One traveller once said that the best thing about Jakarta from the backpacker point-of-view is that the city has a “large international airport nearby that is serviced by a number of international carriers with lots of outbound flights every day.”

That’s may be a little harsh but I’m inclined to agree with parts.

#4 Guest 2020-06-26 20:51
I every time spent my half an hour to read this blog's
articles or reviews all the time along with a cup of coffee.
Quote
#3 Guest 2015-09-22 23:58
Thanks to my father who told me concerning this weblog, this website is actually remarkable.
Quote
#2 Guest 2015-08-09 21:34
If you want to improve your knowledge simply keep visiting
this site and be updated with the most recent information posted
here.
Quote
#1 Guest 2015-08-03 18:02
Hi there, the whole thing is going sound here and ofcourse every one is sharing information, that's truly fine, keep up writing.
Quote
Refresh comments list