The only tuk-tuk I ever liked isn’t a vehicle and has nothing to do with driving it’s a peninsula on Samosir Island at Lake Toba in central northern Sumatra. Lake Toba (Danau Toba) has been a backpacker drop-in chill-out place for years. You can get there by taxi from Medan for 65,000 rupiahs (about US$8) and depending on traffic, takes 4-5 hours.

The taxis are small, cramped people wagons, usually Toyotas or other Japanese makes. If you’re lucky you can get the front seat affording more space for longer European limbs, or try and get a seat in the second row. The last row of seats at the rear of the vehicle are cramped and seat you in the “crumple zone” designed to absorb a rear end crash, which on Indonesian roads seems decidedly likely. 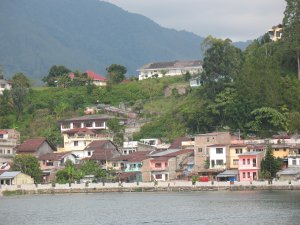 Driving in Sumatra is accompanied by much flashing of headlights, flicking of indicators and blasting of horns, all seemingly without any effect whatsoever. All you get is a cacophony of sound that drivers and pedestrians are so used to they take virtually no notice anymore. Vehicles exiting driveways and side streets sometimes are accompanied by someone wearing a visible vest blowing a fluorescent whistle and waving a small stop sign; which most drivers promptly ignore. Some towns sport signs against use of horns within their environs, which are also ignored by all and sundry.

Sumatra’s roads are crowded and narrow. Choked with trucks and buses, taxis overtake in the least space possible, usually when faced with an imminent head-on crash with larger vehicles.

After several hours in the vehicle with the window down the hot air and diesel fumes blasting into the taxi, my face was so dirty it turned a white tissue black. The air-conditioning either didn’t work or the driver, chain-smoking clove cigarettes, refused to turn it on. 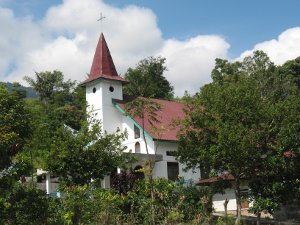 By the time we got to Parapat I was the only passenger left in the taxi, the others had all left along the way, so I drove the last hour in the relevant space and comfort of the front seat. This only afforded me better views of the near misses on the roads. Traffic is noisy and as most actions are accompanied by blasts on the horn, there is music to go with the thrills.

Parapat itself looks like Queenstown in New Zealand’s South Island and Lake Toba like Lake Wakatipu but with a tropical feel. At Paradep Taxi’s restaurant I met Hans. I thought the name German but it’s Dutch “short for Johannus”. He said 99% of the island’s Batak tribe were Christian, something I discovered later by the prevalence of churches everywhere, some of them a curious blend of traditional Sumatran architecture mixed with imported European design. “We’re Christian too,” said Hans. I nodded looking at the large framed embroidery of the Last Supper on the wall.

Hans sorted out my outward travel back to Medan and flight to Jakarta and recommended Bagus Bay as a place to stay. He was nice bloke and good to deal with, a relief after the taxi driver in Medan. 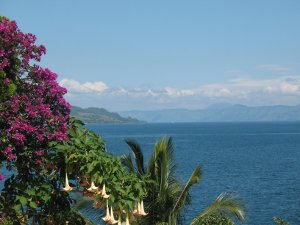 The ferry from Parapat costs 7000 rupiah and takes 40 minutes to get to the peninsula. There are also ferries to Tomok, down the coast and larger car ferries which dock further south. I stopped at the first homestay, Bagus Bay, and got a clean, basic room for 75,000. Bagus Bay itself has a number of hotels and guesthouses varying form basic to upmarket, depending on your price range.

I was welcomed by the sound of the chainsaw. The owners had decided to remove some large trees and an islander in bare feet wearing no eye or ear protection was dealing to a 25-metre tree attached to the top of which was a long rope held at ground level by several of the locals aiming to steer the falling timber away from the restaurant. Things didn’t go according to plan and the tree toppled across the volleyball nets and through another tree causing more damage. No sooner was it down then about two dozen locals armed with machetes took to the branches and had it stripped within minutes.

A constant stream of people then removed every bit of timber past the restaurant over to their homes for firewood. One young girl carried everything she could on her head, the traditional way, while texting on her mobile phone and giggling when I asked to take her photo, but she was too shy. 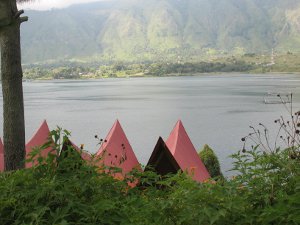 Every afternoon for three days the man with the chainsaw and the locals came back to fell and retrieve more wood. When the small stuff was gone they brought in a mobile saw mill to cut the trunks into ten metre planks. The mobile saw mill turned out to be a bigger chain saw, and every afternoon the man in the bare feet dealt to in minutes with what nature had taken years to provide.

The peninsula, about two kilometres around is doted with restaurants, bars and hotels. The island is best seen by hiring a motorbike, which can be had for 80,000 rupiahs including a tank of gas. I asked the lady across the road from where I was staying if she wanted my passport. “It’s OK, I trust you.”

Well, it’s an island, where are you going to go?

Lake Toba’s appeal resides in the stunning physical setting and famed “chill out” atmosphere, part of the so-called “Banana Pancake Trial”. Dreadlocked locals wander the streets and Bob Marley gets a fair amount of play. Restaurants have traditional Batik music evenings, though there’s places like Roy’s Pub to go to if you want life Western and local music.

Roy is also an Indonesian name. is pent four nights on the island and the last night Anna from the hotel suggested going to Roy’s for the live music evening. She then surprised me by getting up on stage and belting out a few songs starting with the 4-Non Blonde’s “What’s Up?” In a week’s time she leaves Bagus Bay and will apply for a visa to England to visit her sister who is married to an Englishman and has children living there. 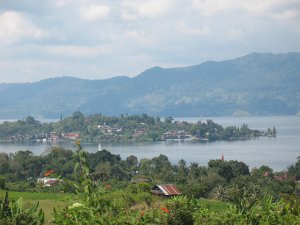 Roy’s brother and father paint owning the gallery below the bar. While Roy sings and plays rhythm guitar his wife, tends bar and dances with the customers.

The electricity is unreliable. During the afternoon or sometimes in the evenings the power would go off for an hour or two. Nobody was sure when it would be back. The guy in the restaurant shrugged and blamed the government, and the evening peace would be shattered with the sound of generators.

Essentially Lake Toba is a lake 100kms long and 30 wide or about twice the size of Singapore with an imposing island, Pulau Samosir, in the centre, measuring about 100kms in circumference and formed by a gigantic volcanic eruption, known to volcanologists as the “Toba Incident”.  The eruption was so powerful that it covered the entire area of South Asia in 15cm of ash, and led to a massive form of a volcanic winter. Estimates using modern techniques estimate the total volume of ash from the eruption of the four craters at Toba to measure some 2800 cubic kilometres.

I headed around the peninsula past sweeping views of the lake and hotels and restaurants perched precariously on cliff edges overlooking a natural wonder. At the end of the peninsula road going north there’s a football pitch and the island’s only ATM.

From there you head along the coast road. The road is narrow. You need to be aware of fast moving SUVs, overladen trucks, and taxis, especially on corners. I stopped to put on more sunblock and a man in a SU pulled up to ask me what the problem was, concerned I might be in some difficulty.

School children, the younger ones in red and white with matching caps strolled down the roads, oblivious to the traffic, as people on the island walk with the traffic not against it. If you walk on the other side you attract stares from the locals who wonder what you are doing there.

The coastal road is backed by the high sweeping bluffs that are the backdrop to Samosir. Everything seems very laid back and is. The woman who rented me the bike said be careful and offered me a helmet before withdrawing it, saying there were no police here. I took the helmet anyway, though it proved an ill-fit and squashed my forehead after a while.

The nearby German owned bakery served me the most expensive cocktail I’d had in Southeast Asia, costing over $9 for something I’d get for a little as one-third that in Cambodia or Thailand.

On the opposite of the island from Tuk Tuk are hot springs and the dusty market town of Pangururan. Traffic through the market was down to a crawl. Petrol costs 6000 rupiah for a litre at the numerous roadside stalls where the road is backed by the high mountain vistas and blue water views, a stark contrast with the brilliant green of the rice paddies.

Each hour the ferries come and go starting at 7am and going through until 6 at night. The lake serves as laundry for many and a food source. Huge blue bins of fish are caught every morning for sale. Men in traditional dugout canoes paddle the coastlines checking their lines.

The water must be quite cold as the nights aren’t warm. Islanders use the lake for a bath the older children and adults bathing in shorts and t-shirts.

The large say no to drugs sign on the peninsula is in contrast to the offers of marijuana and numerous advertisements in restaurants for magic mushrooms.

But that’s Lake Toba, contradictions and charm, in a stunning setting.