Medan, in northern Sumatra (or Sumatera) is a two-hour flight from Bangkok and the third largest city in Indonesia.  Indonesia is sometimes described less as a country and more of a polyglot Javanese empire run by central government from Jakarta and backed by the country’s formidable military, the TNI.

For years parts of Indonesia did their best to escape the clutches of Javanese rule. In northern Sumatra, the Gerakan Aceh Merdeka (GAM) or Free Aceh Movement fought a bloody separatist war from 1976 until 2005, costing over 15,000 lives. All this came to an end with the 2004 tsunami which literally swept all before it, including the residue of warfare allowing Jakarta to step into the disaster ravaged region with ease, where for years its military struggled to succeed. 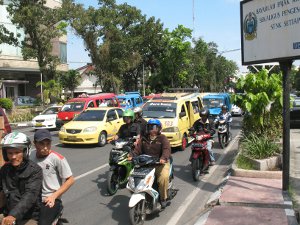 But the peace may be fleeting. Political violence is reported in the English language Jakarta Post, and the central government has mobilised 900 police and over 14,000 TNI personnel to combat violence, much of it perpetrated with weapons believed withheld by GAM following the signing of the peace process in 2005.

In addition to Aceh, East Timor only recently gained its independence after years of Indonesian rule, and today violence continues in Irian Jaya, West Papua, as Jakarta seeks to “Javanise” to settle there through pro-settler policies.

During the mid-1960s, anti-communist violence perpetrated in Indonesia upon the instigation of the CIA concerned at the “Domino Threat” killed an estimated one million people, many of them of Chinese descent. Whole villages in Bali were wiped out, then the buildings bulldozed and trees planted to hide any evidence people had ever lived there.

At Survarnabhumi Airport I was introduced to Roni, on his way home to Sumatra. He asked about religion in New Zealand, and what were the proportions of denominations. I assumed he was Muslim but Medan and central Sumatra is heavily Christianised. He introduced his wife and several of his party, who had been on a vacation to Bangkok. Luckily, he didn’t introduce me to everyone he was travelling with as there were 72 of them. He said they were all from Parapat, on the shores of Lake Toba, the jumping off point to Samosir Island, the masse island that dominates the lake view.

Indonesia has recently introduced a visa-on-arrival scheme which costs US$25, payable in dollars. You do not need a passport photo and no proof of onward travel is demanded despite what official websites tell you. The airport’s baggage carousel is a straight-line conveyor belt about 20m long, so if you’re not there in time all your bags wind up in a pile on the floor. 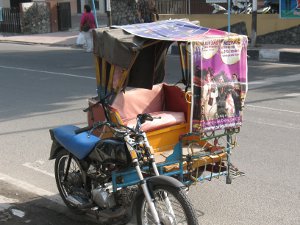 My taxi driver went from friendly, to a pain in the arse, to a rip-off in under an hour. Having collected two gangly French backpackers as co-passengers he dropped them off at a Lonely Planet $5 dive and assured me that my hotel was “too far away”. He knew of others that were better and closer. After about eight stops at some hotels that were too expensive and others I wouldn’t put a dog in, I wound up paying more than I’d bargained and was charged the same as he said it would’ve cost to take me to my hotel “too far away.”

“Today in Medan is crocodile and python eating day” said the driver. “You like python?” I said I’d never tried and asked where they came from, were they bred in captivity or caught in the wild? In the wild he told me about 200kms from the city. I told him I’d seen Burmese pythons, huge creatures in the zoo t never in the wild of had eaten one. “These are different pythons,” he said. I wondered with the hunting of these animals why the tales of seven and eight metre snakes were just figments of imagination, or now a piece of history.

I was ready to collapse at the last hotel. The staff were watching English football on TV. For 250,000 rupiahs (about US$30) I got the “suite” a huge room with a struggling air-conditioning unit, local TV and no hot water. Welcome to Medan, the biggest city in Sumatra, population two million.

After the traveller-friendly set-up in other Southeast Asian countries Medan came as a bit of a shock. The hotel had no restaurant, though street stalls were nearby, there was no internet or seemingly anyone able to furnish travel advice. The room did come with breakfast, sweet rolls and sweeter tea. Accommodation, it appeared in Indonesia has fallen behind much of the rest of Southeast Asia Burma included from what I could see, and has some ground to make up.

I went off exploring and in search of a bank or money changer. Indonesian banks are reluctant to change foreign currency. One recommended the money changers and another agreed to change depending on the condition of the bills. Despite my US dollars being new and recently delivered from an ATM in Phnom Penh, this was however, not enough to satisfy the bank, which suggested the money changers at Gembria City, just down the road, and writing down the name in amazingly neat handwriting.

There the rate was slightly less than the bank, but as it turned out much more than could be had a Parapat or on Samosir Island at Lake Toba.

What I noticed about Medan was the intermixing of religions, Muslim and Christian, with large Christian cemeteries overlooked by mosques. The Muslim call to prayer woke me about 4:30am. Muslims and Christians were all through the city. Things don’t always run as smoothly in Indonesia inter-religious violence has been a feature of life in Sulawesi in the past.

Moving around Medan on foot can prove difficult. Pavements, where they exist at all are built around trees which pedestrians have to negotiate. If you step into the road the traffic is voluminous and faster paced than Cambodia. Step on the other side of the pavement and you risk falling into Medan’s drainage system, deep drains lining the road sides.

The other thing I noticed about Medan was the absence of ostentatious lath. There were no luxury vehicles on the roads. There were plenty of vehicles, but in Indonesia, unlike Cambodia, with it’s gross disparities of income, Indonesians go in for modest family movers, smaller Toyotas and other Japanese people wagons.

The most interesting vehicles were the local tuk tuk, the motor becaks. These small motorcycle sidecars seem grossly underpowered and large enough perhaps for a European to squeeze into without luggage. Motorcycles were noisy, often with modified exhausts which seemed to only add to the chaos.

Housing seemed on a more even keel. There were one or two larger properties about but most people lived in dwellings o brick or concrete at more or less the same socio-economic level, or so it appeared to me.

The lack of space didn’t prevent them carrying women and their shopping or groups of schoolchildren along the roads. Venturing out onto Medan’s streets is best undertaken with caution. There is little room for manoeuvre and the traffic moving fast doesn’t afford many gaps for you to take advantage of. Unlike Phnom Penh, where everything and everyone just blends in together, and pedestrians can saunter their way across even main thoroughfares, Medan’s traffic seems out to get you.

People were helpful with directions, not that I really knew where I was going. The hotel had no idea where the bus station was and a travel agent gave me the card of taxi firm if I wanted to travel Lake Toba by road. Their depot they said, was miles away.

I had brunch for 12,000 rupiah a street stall, where the locals were discussing last night’s draw between Manchester United and Chelsea. Being supporters of each they were pouring over the sports pages, drinking coffee made with condensed milk and smoking clove cigarettes, the ever lasting aroma of Indonesia.

They were happy to talk. One young man asked where I was from and where I was going. His boss he said was an Indian who had lived in Canada and so he spoke good English, and he was learning from him. I asked what time he started work as it was after 10am. “Soon” he said, which turned out to be now as another guy appeared and he said he had to go now.

Walking down the street people would call out to you “Hello mister” sometimes followed by something else in English or maybe Indonesian. One becak slowed down to offer me a ride of ask me something. As I leaned forward there was a small schoolboy sitting inside grinning from ear to ear. “Hello mister.”

Medan isn’t really a highlight on Indonesia’s tourist map, most, like me, just pass through. However, it’s noted for its many colonial Dutch buildings and some fine art deco examples, and parks.

From Medan you can head north to Banda Aceh scene f utter devastation following the 2004 Boxing Day tsunami and its famed surf beaches, or southwest to Lake Toba, which is where I was going, not being a surfer.