Cambodia has proved a challenge for film makers over the years. For most movie goers, the enduring cinematic image is that of Roland Joffe’s The Killing Fields, set during the Khmer Rouge era, though the film itself was shot entirely in Thailand, and slated for its Hollywood depiction of events.

Other films however, did make it to the kingdom.

Joseph Conrad’s novel Lord Jim was twice made into a film, the second time in Cambodia. Directed by Richard Brooks and starring Peter O’Toole as Jim, it was mainly shot in the temples and jungles at Angkor near Siem Reap in 1964.  Another of Conrad’s works, Heart of Darkness, was the basis for Apocalypse Now, a film whose climax was set in Cambodia.

O’Toole’s character is a disgraced sea captain who redeems himself on a remote island saving the local inhabitants from bandits and marauders, and acquiring the title “Tuan” or “Lord” from the locals in the process.

Screenwriter and director Richard Brooks bought the rights for Conrad’s work for a mere $6,500 in 1958. He was obsessed by the idea of turning the story of a British merchant sailor into an epic film. Brooks spent three years writing the screenplay. He coaxed $9 million from Columbia Pictures, persuaded Peter O’Toole and James Mason to star in the movie, and travelled through Asia to find exotic locations. 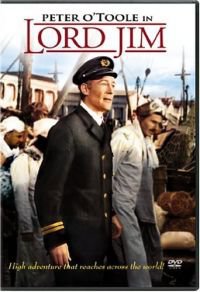 O’Toole, at his Adonis best, played Jim squeezed between a number of films including his more famous roles as the heroic Lawrence of Arabia, and a psychotic Nazi in Night of the Generals. However, he detested Cambodia, was unimpressed by the simple living conditions, the food and the less beautiful aspects of wild nature.

The love interest in the movie was played by the obscure Daliah Lavi. Her road to Hollywood and Cambodia was a strange one. She grew up on a kibbutz near Haifa in Israel where, in 1952 when aged 10, she met actor Kirk Douglas. When Douglas saw the pretty girl he did what Hollywood actors do, he offered to adopt her, but Lavi’s parents not surprisingly, refused. Instead he left her a grant which she used to study ballet in Sweden, a life in Paris and Rome followed before she made it on to the set of the film at Angkor.

In early 1964, over 100 American and British filmmakers flew to Phnom Penh and then on to the final destination, Siem Reap. With Angkor Wat as a magnificent background, the set designers and an army of local craftsmen had erected the houses, pagodas and schools for the fictional village of mythical island of Patusan, the setting for Lord Jim.

With unfamiliar outside temperatures of 40 degrees Celsius, a zoological mix of snakes, lizards, bats and mosquitoes, and no bars or nice restaurants in Siem Reap, the actors were largely confined to the now defunct, Hotel Auberge Royale des Temples. On location cast and crew were forced into tents but were unable to wander about at night due to snakes “hanging from the trees”.

After one of the foreign crew members died after being bitten by a cobra everyone received lessons on how to avoid contact with deadly reptiles. At one point, Lavi was struck down by a bacterial infection and hospitalised in Phnom Penh. As a result, she turned up thinner in some scenes in the film than in others.

Politics overtook filming as the then king, Norodom Sihanouk, busy fighting national dissident groups and attempting to steer a neutral course during the escalating war in neighbouring Vietnam, accused the CIA of attempting to destabilise his government. Anti-Americanism in Cambodia at that time suddenly threatened to turn into violence with a series of demonstrations against the US in Phnom Penh. Thousands wandered the streets chanting “Yankee go home.”

Brooks took the threats seriously ordering the crew to work double time, 18 hours per day, to get the film finished as quickly as possible. Lord Jim was eventually released in early 1965 but was a total box office failure. 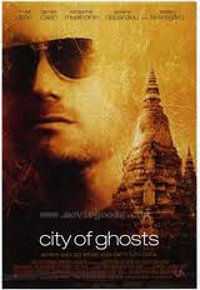 Much later, in 2000, came another cinematic hero, Eidos’s phenomenally successful cyberbabe, Lara Croft and starring the pouting Angelina Jolie, beginning a long association with Cambodia for the actress. It was big budget and a box office smash. Tomb Raider was the first film to be shot in Cambodia since Brook’s 1964 effort, and was one reason why director Simon West wanted to film there.

Cambodia's film industry then, much like all other infrastructure was almost nonexistent, so West had 30 trucks with tons of equipment transported in from Thailand along roads riddled with potholes and unexploded ordnance, cleared with the assistance of deminers from the Royal Cambodian army. Creeping their way towards Siem Reap, the gateway to the world’s largest religious monument where scenes were to be shot, the convoy often halted while soldiers repaired the bridges ahead.

In the 1960s, Cambodia had a small but vibrant national film industry, largely thanks to the patronage of the country's movie-mad king, Norodom Sihanouk. Its chief output then, like the karaoke today, was formulaic, sickly-sweet love stories mass-produced for the masses, but Pol Pot and the Khmer Rouge wiped out the industry, murdering most of the directors and actors.

Cambodia’s film industry has failed to revive, largely stifled by the popularity of Western flicks and Chinese kick-and-chop movies. Recently, Phnom Penh has built some purpose-built cinemas whereas many of the old French colonial theatres were converted into warehouses, shops or karaoke bars, and most DVDs are pirated, even those seen on TV.

Lara Croft attempted to tread a sensitive path to avoid a repetition of the furor that accompanied other films shot in Thailand where the violence upset devout Buddhists. Cambodian conservationists worked with the film’s producers to ensure that Cambodia’s image, still recovering from years of turmoil, was not debased. A detailed contract was agreed to ensure that the ancient temples would not be damaged in any way, something that hasn’t unfortunately extended since to the thousands of tourists visiting the sites every year.

During filming the cast and crew got a rude reminder all wasn’t yet well in Cambodia when halfway through filming Phnom Penh reverberated with the sound of gunfire when almost 100 gunmen laid siege to the city centre. Eight were killed and scores of suspects were rounded up. The supposed leader of what some called an attempted coup was later apprehended just down the road from where the film’s crew was staying.

The lastest Hollywood venture into Cambodia was Matt Dillon’s film directorial debut City of Ghosts in 2002 starring James Caan, France’s hardest working actor Gerard Depardieu and Matt himself. He film tells the tale of conmen on the run, despotic generals, and of vice and corruption set amongst ageing temples and wonderful decaying colonial architecture, which Cambodia has in spades.

Though things are changing in the kingdom, at the time the amoral, menacing ambience of Dillon’s effort was a semi-valid depiction of the reality; Cambodia presented a bombed-out semi-anarchy riddled with landmines, political murders and gang commerce.  One of the film’s most enduring scenes takes place in a fog-blanketed minefield.  One in 250 Cambodians has lost a limb, crippled by thousands of landmines still waiting to be stepped on in the country’s roads, fields, forests and irrigation ditches.

Much of the filming took place around the main post office in Phnom Penh, a magnificent French colonial building, the old capital of Oudoung and Bokor Mountain, and Kampot, where James Caan performs a drunken karaoke scene singing the Sinn Sisamouth classic ‘Bong Srolanh Srolanh Tae Oun’ in a seedy and dangerous Cambodian bar.

The film is notable for the soundtrack which features many of the Cambodian artists from the sixties and seventies. Back then music studios in Phnom Penh, according to one music critic, produced some great “circle dance music” much of it, Cambodian reflection of American music at that time.  Of the musicians from that era, including Sin Sisamouth and Ros Sereysothea, none were to survive the ravages of the Khmer Rouge. All the master tapes were thought to have been destroyed during the Khmer Rouge era and subsequent civil wars, but were miraculously rediscovered.

Dengue Fever, a fused Khmer-US band based in LA and who cover many of the Pre-Khmer Rouge classics led by the beautiful Chhnom Nimol, perform a cover in Khmer of Jodi Mitchell’s “Both Sides Now”.

Stills from the movie can be seen in the Cantina Bar on Phnom Penh’s riverside lining one wall. The Cantina, a favourite hang-out for Phnom Penh’s expat journalist fraternity, sports framed photos from Al Rockoff along the other wall. Allegedly, John Malkovich’s character in The Killing Fields was based on Rockoff’s exploits, though the real photo journalist, a veteran of Southeast Asia, and still a regular visitor to Cambodia, disputes the film’s accuracy.

It’s Cambodia, but as Hollywood sees it.

#1 M.Ledgerton 2012-01-20 03:55
I think this would be of interest to one of the film journals/public ations - would be a good idea to submit it to see what happens.
Quote
Refresh comments list