I’ve only set foot in North Korea once. It was cold, bleak, and I was surrounded by heavily-armed military-types with their eyes shielded by sunglasses, and they were just the South Koreans.

On the surface of it, Cambodia and North Korea have little in common. 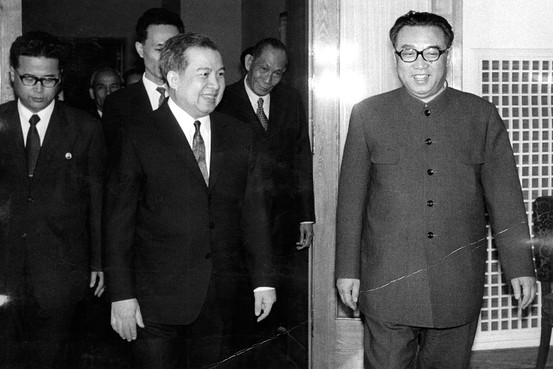 Cambodia is North Korea’s oldest ally in Southeast Asia and Cambodia has long served as a link between North Korea and the region. Diplomatic relations between Cambodia and North Korea go back decades to when Sihanouk met Generalissimo Kim Il-sung (Kim I) in 1961 at a Non-Aligned Movement meeting in Belgrade. The two quickly developed a personal friendship developed, a relationship that continued to a lesser extent with Kim’s successor, his son, the late Kim Jong-il (Kim II).

In his heyday, Sihanouk dominated his country in a way few other royal heads of state managed in the 20th century, almost as totally as the Kims dominated North Korea. Following his overthrow in March 1970 by the Lon Nol regime (1970-1975), Sihanouk mostly lived in exile in North Korea, in a 60-room mansion was built for him overlooking scenic Chhang Sou On Lake, with its spectacular mountain backdrop. A battalion of North Korean troops laboured full-time on it for almost a year, and when it was finished, only hand picked guards were allowed anywhere near the palatial residence. The Korean-style building even had its own indoor movie theater. 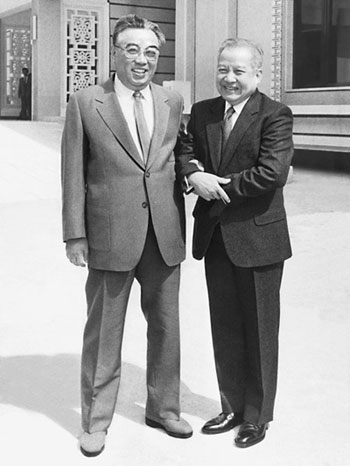 Like the Great Leader’s son, Kim II, Sihanouk loves movies. Sihanouk is famous for both directing and acting in his own romantic feature movies and many an official delegation to Cambodia found themselves invited to a personal showing of the king’s latest cinematic efforts, often accompanied by the king’s own musical score. In North Korea he made a few more, though with Cambodian actors specially flown-in doing the business against a backdrop of Korea’s snow-capped mountains, a far-cry from the flat tropical landscape of their native Cambodia. A family run communist dynasty North Korea may be, but they seem to respect royalty.

The Cambodians enjoyed a sybaritic lifestyle for the North Koreans supplied Sihanouk and his coterie with French wines and gourmet food flown in especially via China, this is a country where famine is widespread. While Kim II made his own films though his technical support wasn’t always so willing. In 1978, Kim notoriously kidnapped the famous South Korean director Shin Sang-ok, who together with his wife, the actress Choi Eun-hee, holding them prisoner for eight years.

Apparently Kim II was keen to strengthen the North Korean film industry and wasn’t fussy how he went about it. In an effort to ingratiate himself with his father and support his position as chosen successor he devised the plot to make films glorifying his father role as the Great Leader. The pair only escaped when on a visit to a Viennese film festival, but not before Sihanouk and Kim had made several films including Pulgasari, a version of Godzilla.

The current Cambodian monarch, Sihamoni studied filmmaking in North Korea until 1977, when he was duped into returning home by the Khmer Rouge, and promptly placed under house arrest along with the rest of the royals. He followed his father into exile after the Vietnamese invasion and lived in North Korea during much of the 1980s.

While the first Kim had 17,000 statutes of himself planted all over the country, Sihanouk held so many positions in Cambodia that the Guinness Book of World Records still identifies him as the politician who has served the world's greatest variety of political office. Though in reality, most of these positions were only honorific. The bilateral relations strengthened over the years through high-level visits between leaders of the two countries.

In July 2000, the Minister of Foreign Affairs of North Korea came on an official visit to the Kingdom of Cambodia. According to the Cambodian Embassy in Pyongyang, the two sides, “agreed to increase their bilateral cooperation in the economic, cultural, educational, scientific sports and other fields of mutual interest” and regional and international organisations.

In 2001, Kim Yong-nam, president of North Korea’s rubber-stamp parliament, the Supreme People’s Assembly, also visited Phnom Penh at the invitation of Sihanouk, and later North Korean Premier Kim Yong-il, not to be confused with Kim II, came in 2007.

To show their gratitude Sihanouk allowed the North Koreans to establish the Cambodia Shipping Corporation (CSC) in the late 1990s. a royally protected flag of convenience also partly owned by a Phnom Penh-based North Korean diplomat, which for a few years aggressively marketed itself as a cheap and efficient “flag of convenience” service for international shippers. In 2002, operations were halted when, after a series of embarrassing incidents, one vessel, though not North Korean-owned, was intercepted by the French navy off the coast of West Africa with a huge cargo of cocaine on board.

In keeping with the country’s international profile, North Korea’s embassy in Phnom Penh hardly presents an open face to the public. Getting access is difficult. The gates are always closed, the security booth is unmanned, and no opening hours are posted. There is, however, an impressive photographic display of Kim II extolling the country’s virtues.

Aside from its supposed diplomatic function, for years it housed a retinue of bodyguards, those hand picked and trained to protect – the Cambodian king. When Sihanouk returned to Phnom Penh in September 1993, after United Nations-led mediation to end Cambodia’s civil conflict, he arrived with 35 North Korean bodyguards, commanded by a general from Kim I’s presidential guards.

For years they remained tucked away in the North Korean embassy, next door the Cambodian prime minister’s new house. Journalist James Pringle, writing in China’s English-language business paper, the Weekly Standard, in 2005 on Cambodia’s new king made great light of encountering these “automatons”.

Pringle had first met Sihamoni in North Korea when there to visit Sihanouk, so he was not altogether unfamiliar with the sight of North Korean security. So years later when he went to Phnom Penh to interview the new king he commented on the absence of “granite-faced” North Korean bodyguards. “For long enough” he said “one could expect a hard thump from these North Koreans while attempting to ask a question of Sihanouk at the airport, or on one of his trips to greet country folk.” 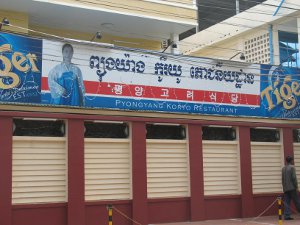 They regarded journalists as a “barely tolerable nuisance”. If seeing a journalist they’d look slightly non-plussed, there being no record of correspondents being granted any real access to the Great Leader or his son, the Dear Leader. Pringle reported that on being granted entry “one was granted a strangled smile and a bone-crushing handshake by these automatons.”

These days bodyguards in the royal palace in Phnom Penh are all Khmer, smaller and apparently not as tough-looking, though it transpires that they have all been trained by North Koreans.

Aside from diplomats and bodyguards North Korean visitors to Cambodia are few. Though thousands of Koreans come to visit Angkor every year, the second-largest national group to visit Cambodia annually after the Chinese, almost all Koreans are from the South.

The few other North Koreans in Cambodia are employed in a curious capitalist exercise of behalf of their government, the Pyongyang Restaurant chain. This chain of eateries, together with other less conspicuous eateries – Phnom Penh’s Pyongyang Korya Restaurant is another - are found across Southeast Asia from Jakarta to Bangkok, Vientiane to Siem Reap are owned and operated by the North Korean government.

According to Bertil Linder, a Bangkok-based Swedish journalist and long-time Pyongyang watcher, the restaurants are run by a North Korean government department charged with money-laundering. As well as serving up Korean delicacies such as barbecued cuttlefish, stringy dangogi (dog meat) soup, and countless variations of kimchi (spicy cabbage), the restaurants sell North Korean products and put on a colourful floor show featuring the waitresses, all chosen for their looks and willingness to extol the virtues of life in North Korea.

In Siem Reap alone it’s estimated that around 120,000 South Koreans a year reportedly visit the town’s two North Korean restaurants, contributing to an estimated W200-300 million (US$1=W1,126) in monthly sales. But since North Korea’s sinking of a navy corvette in 2010, Seoul has asked that South Korean tour companies stop sending their clients there, and business has plummeted. King Sihamoni is not as close to Pyongyang as his father but has made at least one trip to North Korea but cooperation is set to continue.

In 2011, in an effort to ease food shortages North Korea requested Cambodian rice in return for mining machinery and energy expertise. With the latest change in North Korea’s leadership, Kim III, it will be interesting to see the next installment of curious relationship between one of the world’s last communist dictatorships and one of Asia’s longest-running monarchies.