The National Museum of Cambodia sits along the western side of the large square in Phnom Penh also bordered by the Royal Palace, Street 178 and grand French colonial mansions near the Riverside on Boulevard Sothearos, not far from where the Tonie Sap River merges with the Bassac and Mekong rivers. 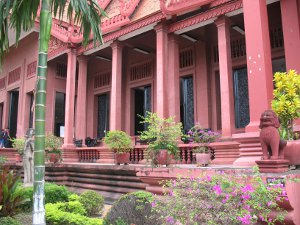 It is the largest historical, cultural and archaeological museum in the country and houses the world's largest collections of Khmer artefacts, including prehistoric items, stone, bronze and wood sculptures, ceramics and ethnographic objects. All up the collection contains over 14,000 items, from prehistoric times to periods before, during, and after the Khmer Empire, which dominated much of present day Southeast Asia, from the borders of Myanmar east to the South China Sea and north to Laos. Of these items only about 1900 are actually on display at any one time, over 12,000 more pieces are in the basement waiting to be categorized and displayed.

The museum is a beautiful building of red sandstone and black gables inspired by the traditional Khmer style. By international standards it’s not large but it’s certainly eye-catching. It was designed by a Frenchman, George Groslier, a man much given to Arts de Khmer.  Work on the museum began in 1917 and was completed in time for Khmer New Year two-and-a-half years later on 13 April 1920, when inauguration of the new museum was attended by King Sisowath and senior French officials. Two new wings were added in 1923. 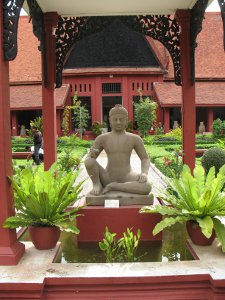 The building now consists of four wings built around a central courtyard containing magnificently manicured and maintained gardens, and water features.
Groslier (1887-1945) the son of a French colonial administrator was born in Cambodia, he died there too, coming to a grisly end. He came to archaeology and anthropology after painting, which he studied in Paris, coming second in the Grand Prix de Rome, much to his disappointment. On his return to Cambodia he visited Angkor and discovered a lifelong fascination with Khmer culture. In 1917, he was charged by the then Governor-General of Indochina, Albert Sarraut, with organising the School of Arts in Cambodia to ‘revitalise the artistic traditions of the people of French Indochina’.

He later accumulated grandiose titles such as Director of Cambodian Arts, and Inspector General of Arts for Indochina. Acknowledged as the reviver of Khmer arts he became the first curator of the Museum Sarraut, as the National Museum was originally called, which he made the sanctuary of Cambodian art. Groslier had retired by 1942 by which time the Japanese had invaded French Indochina. No Vichy-sympathiser, he became a radio operator organising anti-Japanese resistance, but was captured, imprisoned and tortured to death in 1945 at age 58. 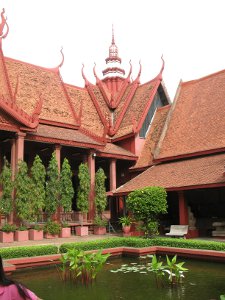 The museum was largely administered and run by the French until they handed it over to the Cambodian government in 1951 just before the country’s independence in 1954, but it wasn’t until 1966 that there was a Khmer director.

The entry fee is US$3 available from the kiosk on Street 178. While one woman working there gave me my change, another slept in a purple hammock suspended from the roof of the small structure. Once inside the museum itself you can pay another $1.00 to take pictures in the inner courtyard but photos are not allowed in the museum itself. Though judging by the ID cards on display from those taking pictures, I was seemingly the only person to have paid for this privilege.

All gate revenues are supposedly turned over to the Ministry of Finance. Yearly budget demands are helped by UNESCO, grants from other countries, and the Cambodian Government.

I timed my visit to avoid busloads of tourists and largely succeeded. There were perhaps 40 or so people wandering about; Irish, Americans, Cambodians from the provinces, and four large men from West Africa by the looks of them who, despite the heat, hadn’t a bead of perspiration between them. 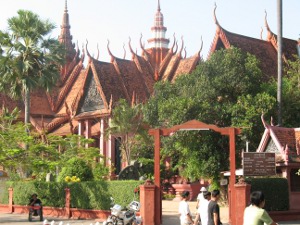 The museum houses many artefacts dating back several hundred years and collected from all over the Cambodia.  Some of the artefacts, though regretfully far too few in number, have been returned to Cambodia by universities and collectors under the auspices of the International Council of Museums.  The Council produced a book in 1993 entitled One Hundred Missing Objects: Looting in Angkor to highlight the destruction and theft of cultural heritage in Cambodia.  Some of the returned artefacts were bought by private collectors from auction houses; Sotheby’s being a particular culprit, which after seeing images in the ICOM series felt bound to return them.
According to another organization, Heritage Watch, an estimated $20 million of Cambodia's heritage has been sold since 1988, though this is probably a gross undervaluation. Worldwide, it’s likely that at least 90 percent of material sold on the antiquities market is illegally acquired. Unfortunately, the trade continues, especially along the Thai border, which is notoriously difficult to police.

For reference the museum is divided into several categories, ranging through prehistoric items and sculptures, ceramics and ethnographic objects from the prehistoric, pre-Angkor, Angkor and post-Angkor epochs. While stone sculptures are prominent in the collection, works in bronze demonstrate the fine techniques in Khmer metal making in ancient Cambodia. A large 11th century bronze sculpture of Reclining Vishnu from West Baray at Angkor at the museum is regarded as one of the monumental masterworks of Khmer statuary.

The museum, much like Cambodia, was closed from 1975-1979 during the Khmer Rouge regime. Despite the regime’s yearning for a return to the greatness of Cambodia’s feudal past when the Khmer Empire ruled, they had little time for the icons of that or any other period.

Philistines then, and butchering, murdering ones at that. During their rule the building fell into neglect, and display items went missing or were damaged. The roof caved in, the gardens disappeared under layers of weeds, and the years of abandonment left the building infested with the world's largest bat enclave inside a man-made structure.
The museum reopened with Vietnamese assistance following the Khmer Rouge withdrawal from Phnom Penh in 1979, but much like the country it has been trying to recover ever since.

Now some of that repair work needs repairing. A quick inspection reveals façade cracks, peeling paint, a broken stone bench. Inside, some walls are marred by unpainted patches, and the lighting is poor. The visitor services aren’t too flash either.
The director since 2008 is Hab Touch, who strives to work on improving the museum with the aim of making it a ‘world class facility’ but says that further progress will require ‘monetary assistance and qualified volunteers’.

Despite these efforts there are still huge gaps in detailing Cambodia’s turbulent history. There’s no facility detailing the almost century-long period of French colonial rule. Nothing exists on the brief Khmer Republic (1970-75) or politically and historically on the equally short-lived Democratic Kampuchea that succeeded it, save for the genocide tourist sites of the Killing Fields outside town and the Tuol Sleng detention centre in the south of the city. Both of which draw all the tourists urged on by Lonely Planet and other guides. Neither is there any history on the Japanese occupation during World War Two, when Cambodians were first bombed and killed by American planes, a portent of things to come. The whole of the post WWII period up to the fall of the Khmer Republic, and which sowed the seeds of Cambodia’s destruction, is also absent; as is the People's Republic of Kampuchea (1979-89) when a Vietnamese-backed regime ruled.

Some people might find the museum a little underwhelming. As said it’s not a large facility and compared with similar museums in other countries with loads of cash, there’s no vast display rooms or endless corridors with hundreds of visitors. That’s because the museum, much like Cambodia itself, is still rebuilding after all the turmoil the country has experienced over the years, and because it’s Cambodia; low-key, laid back and invariably short of funds, but striving to get along nonetheless.

The National Museum of Cambodia; it’s worth a visit.

The museum is open from 8:00 am until 5:00 pm, seven days a week, with a charge of US$3.00.
Tour guides are available in Khmer, English, French, Japanese, and Vietnamese for a recommended fee of US$5.00, and guide books for US$3.00. The exhibits are labeled in Khmer, French and English.