The Kingdom of Cambodia has the last remnant of royalty in the territories that were part of what was once known as French Indochina. The Emporer Bo Dai abdicated in Vietnam in 1945, and the communist Pathet Lao, ironically led by a former royal, had the entire Laos monarchy locked up in 1975.

Cambodia is awash with public holidays, many with a monarchist theme. At the last count there are officially 18 holidays of all description spread over even more days, including no less than three separate New Year’s celebrations. Included amongst these are 29 October, coronation day for the current king, Norodom Sihamoni, and 31 October, the birthday of the previous king, Norodom Sihanouk, the King Father.

Preparations for the events are large and widespread in the city. 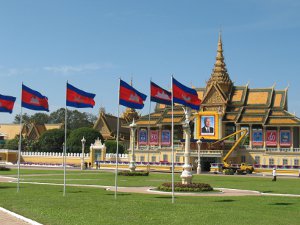 Huge billboards bearing portraits of the royals are erected in open spaces around town, especially near the riverside, the Royal Palace and in the grass square near the National Museum. In the latter, marquees go up the week before on each side of the square draped in the national colours, blue and red. In front of the museum building itself and huge portrait of Sihanouk flanked by the numbers 20 and 90 and the years 1991 and 2011.

A band stage went up in light blue. There were huge fireworks displays over two nights. And podium organised above the palace walls for the speeches. All day Saturday on the eve of the ceremonies, workers were out painting the kerbs white, and the bottom of nearby trees. Some of these workers had their children with them, so while mum and dad were splashing paint over concrete and timber, the kids were playing nearby, and, well, splashing paint over concrete and timber.

Unfortunately, someone forgot to warn pedestrians, so all over riverside were white footprints trailing off along the footpaths and roads. 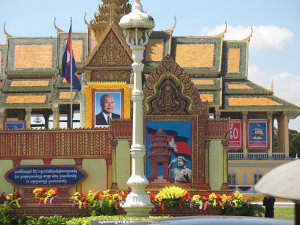 Sihanouk’s 90th birthday coincides with the 20th anniversary of the Paris Peace Accords, which enabled his return to Cambodia from exile in 1991 following the collapse of the Khmer Rouge.

It was his first public address in Cambodia since abdicating the throne in 2004, Sihanouk he told a crowd near the Phnom Penh waterfront, that he wants to stay in the country supporting the ruling party and the national development in the country. Royalty is not overpowering in Cambodia, as it is in Thailand. There is no lese majeste here. The throne and role of the monarch is largely ceremonial. You may want to be careful what you say, but out of regard for not offending the locals, not because you’re going to wind up in a prison sweat box for 15 years. 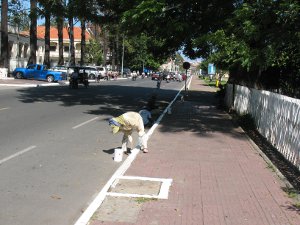 The King Father has spent much of the last seven years out of the country, most of his time has been spent in China, where he has been receiving treatment for cancer. “Even if my health is still a problem and I need to have Chinese doctors every day [I] have absolutely decided not to leave Cambodia,” he said, though this seems to place little faith in the local medical fraternity.

The present day king, Sihamoni was born in 1953, the year Cambodia gained independence from France, an event in national history forever synonymous with his father. Sihamoni is the world’s only Czech-speaking monarch, having spent his formative years there training in classical dance, he returns to Prague frequently.
He is the eldest son of the former king and his sixth wife, Monique. In 1975, he went to study cinematography in North Korea, a country which has featured much in his father’s life. Sihanouk spent much time there himself and has at times, travelled with an entourage which included Korean bodyguards.

Later that year he returned to Cambodia, duped according to some reports by a letter bearing the forged signature of his father, but in fact written by the Khmer Rouge. During their genocidal rule, Sihamoni, along with most of his family was kept under house arrest in Phnom Penh. Five of Sihanouk’s own children were among Pol Pot’s victims. After the Vietnamese liberation of Phnom Penh, Sihamoni took off for France and he spent much of the next 20 years outside the country. 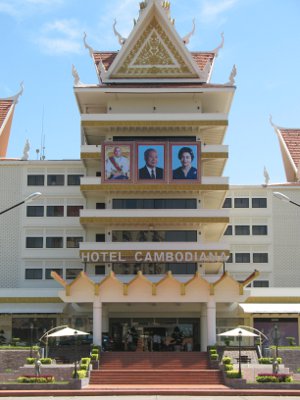 When his father abdicated in 2004, Sihamoni was a likely candidate to succeed Sihanouk, the other being his half-brother, Norodom Ranariddh. Sihamoni’s distance from Cambodia’s political wrangling saw him as a preferred candidate, particularly, by the prime minister, Hun Sen, a political rival of Ranariddh. Hun Sen had a somewhat frosty relationship with the former king, reportedly disapproving of what he viewed as Sihanouk’s meddling in politics.

There may be some substance to that claim. Sihanouk has dominated the political life of his country in the way few other king-statesman have anywhere in the world in recent times.  He held so many positions since 1941 that the Guinness Book of World Records identifies him as the politician who has occupied the world’s greatest variety of political offices. These included two terms as king, two as sovereign prince, one as president, two as prime minister, and one as Cambodia’s non-titled head of state, as well as numerous positions as leader of various governments-in-exile.

By comparison with Sihamoni, his half-brother, Ranariddh, immersed himself in politics. He was chairman of the Funcinpec political party until 2006, when he was removed after a financial scandal.

Subsequently he established the self-titled Norodom Ranariddh Party, the third-largest party in Cambodia, which means it’s pretty small, organized political opposition being rather thin on the ground. Following the Peace Accords he was once on an equal footing with Hun Sen, but it didn’t last long. Hun Sen ousted him in 1997.

Phnom Penh is small. Sitting in a coffee shop one day a slightly built man with familiar features walked in accompanied by a younger, heavily pregnant woman. A bevy of bodyguards dressed in matching light olive-coloured safari suits deposited themselves by the entrance and cast furtive glances in my direction.

I was unsure who this man was, though the entourage indicated he was a man of influence and power and probably wealth, as they all go together in these parts. It was Ranariddh the staff told me later. Now he acts as chief advisor to his half-brother’ advisory court.

The negotiations themselves which led to the final signing of the Accords, involved several years of convoluted diplomacy, carried out during a period when the country was still racked by internecine conflict, and thousands more perished. When they were finally signed in October 1991, it was envisaged that Cambodia would move on to peace and democracy. It hasn’t worked out that way. Elizabeth Becker reported on Cambodia for years, and covered the negotiations. She wrote ‘When The War Was Over’ and was one of the few Westerners to be granted an interview with Pol Pot when the Khmer Rouge ruled Cambodia.

Her view that Cambodia today is essentially ruled by a single political party with little room for opposition, with a weak and corrupt judiciary, holds true. Most of the country’s union leaders have been murdered. This wasn’t the scenario envisaged in Paris 20 years ago.

The celebrations continued all weekend. The fireworks echoed through the stairwell in my building, and the concert went on pounding out the music. A week later and all the billboards, flags and banners are still in place, for the return of the king.