Takeo Province lies to the south of the Cambodian capital, Phnom Penh. To the north and east it borders with Kandal, to the west with the provinces of Kampong Speu and Kampot, and to the south with Vietnam. It has a predominantly rural population of almost one million, jammed into an area barely 3500 kilometres square. Takeo is often referred to as “the cradle of Cambodian civilisation”. 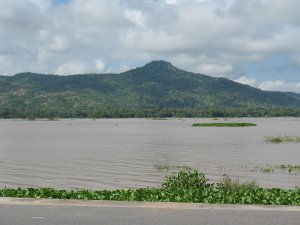 The province has several important pre-Angkorian sites built between the 5th and the 8th centuries, and other sites of historical significance.

Before the Khmer Empire, present day Takeo was dominated by the Kingdom of Funan, an ancient kingdom pre-dating Angkor and located around the Mekong Delta and southern Cambodia between the 1st and 7th centuries before its demise by conquest. In a continuation of cross-border rivalries, Cambodians claim Funan was created by Khmers, while neighbouring Vietnam argues that they were the people of origin.

It is thought Funan controlled the maritime sea trade in the region with far-flung connections – Roman and Greek artifacts were recorded there. Scholars speculate Funan set the pattern for mercantilism and commercial monopolies that would become a pattern for empires in the region before being superseded and absorbed into the Khmer state of Chenla, or Water Chenla as its was referred to, because of all the natural waterways in the region.

In the rainy season, there seems to be water everywhere. The region is surrounded by a series of canals and waterways that were cut through the surrounding countryside, many a very long time ago, connecting towns, villages, rivers and with Vietnam. South of Takeo city itself the only thing that appeared to be still above water was the road, with everything else submerged with floodwaters in an area dominated by lakes and waterways. Even the power pylons had been constructed on raised concrete legs to keep them out of the water. 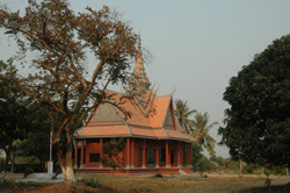 The Khmers I was with were afraid of going into the water, largely because many cannot swim. I told them I didn’t want to go into the water because I do not like snakes, or anything else for that matter may be hiding there.

Nearby Angkor Borei town (connected by canal to Takeo town) may have been the heart of the Funan Empire. Unfortunately, despite attempts by archaeologists to decipher and preserve the history and story of the Funan period, its relics have often suffered.

In 1999, following an archaeological dig by a US university at Angkor Borei, locals decided to cash in, so they started digging and looting objects from the area. In other episodes, parts of ancient walls of Funan and some partial structures thought to be useless by the locals were bulldozed to make way for more “useful” modern day structures.

On a brighter note, historians have managed to preserve some of the razed artifacts and history which have been put together in the local museum, built with support of the European Union.

Phnom Da is situated about 24 kilometres from Takeo and is one of the ancient historical places in Cambodia. Built in the 6th century by the King Rut Trak Varman, it is a temple constructed on a small hill and made of distinctive laterite stone. Laterite was the main building material for Angkor and many other historical sites in Southeast Asia. 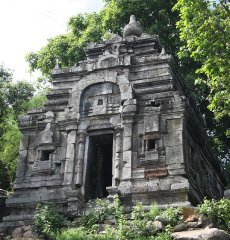 Once upon a time, Phnom Da was the old capital of Nor Kouk Thlork commune. Nearby Phnom Da are other temples and a collection of statues. During the Khmer Rouge years local caves were used as cremation sites. These days the site is one of the popular tourist attractions in Takeo and can be reached by road or by canal, one having been constructed following the Vietnamese invasion.

A number of other historical sites are located in Takeo, and are much less visited than the major attractions of Angkor. About 30 kilometres north of the provincial capital is Phnom Chiso temple built in the early 11th century by King Suryavarman I (AD 1002-1050).

Nearby Phnom Chiso Pagoda was originally built in 1917, but destroyed by war during the 1970s before being rebuilt in 1979. Close nearby is Vimean Chan, a cave located about 150 metres south of the temple. During the America’s war with Vietnam, the site was bombed, dislodging several large rocks that block the entrance to the cave today. 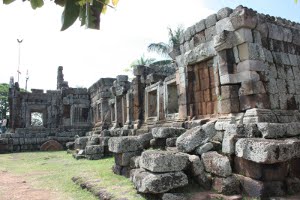 Takeo’s 20th century history was bloody. During the Khmer Rouge years the province formed part of the southwest zone and was controlled by the brutal Ta Mok, Brother Number Five, the last leader of the Khmer Rouge. It was Ta Mok who had Pol Pot placed under house arrest during the death throes of the Khmer Rouge, when they were a spent force hiding out in the northern Danrek Mountains. Some say Ta Mok then had Pol Pot poisoned to death.

Ta Mok was a Takeo local of mixed Khmer and Chinese heritage. Reportedly born into a relatively prosperous family, his real name was Chhit Choeun. Ta Mok or Grandfather Mok, as he was to become known, was a soldier most of his life. After leaving the priesthood at 16, he fought first the Japanese, then joined the Khmer Issarak (Independence) movement to fight French colonial rule. After, he joined the Khmer Rouge and by the late 1960s he was a general and the group's chief-of-staff. During the short lived Democratic Kampuchea, Ta Mok was the head of the army and chief enforcer. He led the Khmer Rouge purges, and was responsible for many massacres in Takeo and other provinces, earning him the nickname “The Butcher”.

In 1999, before his capture and imprisonment, Ta Mok was the last leading member of the Khmer Rouge to remain at large in Cambodia. Originally charged with tax evasion (!) it wasn’t until 2002 that he was finally charged with crimes against humanity, however, his trial was repeatedly postponed. In poor health, Ta Mok died in a military hospital in 2006.

His house, an imposing multi-storied white edifice, is visible across the lake from Takeo city. To get there you have to cross a long causeway. The house is largely empty, everything having been looted, save for the floor tiles and large murals depicting Angkor Wat, wildlife scenes and a map of Cambodia. Paranoid about his personal safety, the house reportedly contains secret passages and escape tunnels. 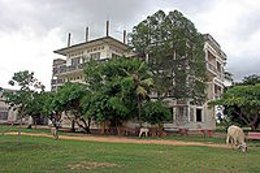 Reportedly, he ordered the builders and architects executed afterwards to guard the building’s secrets. Today the site is occupied by a police training facility.

These days Takeo has a relaxed feel to it. The main roundabouts are dominated by a giant lotus flower sculpture and a scaled down version of the Independence Monument, designed by the influential Khmer architect, Vann Molyvann.

Tourists seem sparse on the ground. I had dinner near the lake, the food included a barbecue with a dish called “beef on a mountain”, where the food is cooked on a barbecue that resembles an upturned bowl. The restaurant was next to a large pond and fish jumped out of the water somewhere out there in the darkness. Later we had lobsters in the Land of the Lobsters. 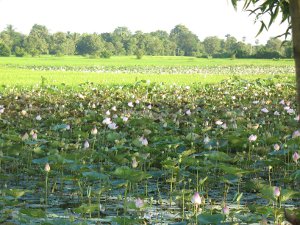 The return to Phnom Penh along National Route Two was through flooded countryside, fields of rice waiting to be harvested and fields of lotus flowers, their pink and white leaves resplendent in the afternoon sunshine.