Though situated miles inland the Cambodian capital Phnom Penh is dominated by water. Previously the city was known in Khmer as Krong Chaktomuk meaning "City of Four Faces".  The name is derived from the “X” formed by the junction of the three rivers that meet in the capital; the Mekong, Bassac and Tonle Sap. Cambodian history too has been dominated by the monsoon, in a country where the wet season is both too heavy and too short. Hence the large barray, or reservoirs, built at the ancient city of Angkor as a means of capturing enough water to last until the next big rains.

The Mekong is the world’s seventh-longest river and fourth largest in volume. It starts life on the Tibetan Plateau in China, the world’s largest freshwater repository and source of Asia’s greatest rivers, and runs through Laos and Cambodia to the delta in Vietnam.

On the way it passes the 4,000 Islands (or Si Phan Don) in Laos, an archipelago of tiny islands that stretch along the Mekong near the Cambodian border, stand as one of the country’s most popular tourist spots, a good chill-out spot and home to the Mekong’s freshwater dolphins. There is another school further south in Cambodia, near Kratie. 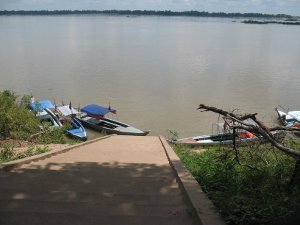 In the dry season the waters subside to leave thousands of tiny islets – most of them barely big enough to support a palm tree – that give the spot its name. The largest of the islands – Don Khong, Don Det and Don Khon – are the only ones that are inhabited all year, and offer visitors a taste of laid back island life.

Thousand of years ago Cambodia didn’t exist.  It was an expanse of water between present day Thailand, Laos and parts of Vietnam.  The Mekong River made Cambodia, depositing every year in the wet season the soil to create the fertile plains that are now the country.  Today Cambodia’s hills are the islands that once-upon-a-time dotted the sea.

In addition to acting as the backbone of one of the most diverse ecosystems in the world – second only to the Amazon – the Mekong River also supports the livelihoods of the 60 million people that live in the Lower Mekong River Basin.

The Mekong Delta is Vietnam’s rice bowl, it’s most fertile land, and where another river descends from Phnom Penh, the Bassac. To fly over the delta is to see a flat landscape, a patchwork of paddy fields and canals, lined by houses stretching in some instances for miles, as far as the eye can see.

The Bassac is the west tributary of the Mekong, and starts in Phnom Penh, and flows southerly to Vietnam crossing the border near Chau Doc. In Vietnam it’s known as the Hau river, and is crossed by two bridges, the Monivong in Phnom Penh and the Can Tho in Vietnam, an impressive looking structure. 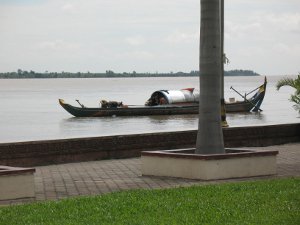 The convergence of the Tonle Sap and the Mekong at Phnom Penh, and the separation into a new river, the Bassac, means this stretch of water is a good mooring and busy transport thoroughfare for vessels up and down the river from Vietnam. This transport includes small container vessels, large river cruise ships some with swimming pools, freighters and a variety of fishing boats.

Heavy monsoonal rains across the Sub-Mekong region; Thailand, Cambodia, Laos and Vietnam has seen widespread crop and infrastructure destruction and fatalities. Worse, the flooding will impact food supplies for next year’s harvest.

In Camdodia, the death toll from flooding has so far reached almost 250 and the riverbanks on the Tonle Sap and Mekong Rivers are in danger of collapse. The Ministry of Water Resources and Meteorology has warned that people living along rivers face the greatest danger.

The National Committee for Disaster management reported that more than one million people had been affected by the floods in 17 provinces, and more than 100,000 hectares of rice fields had been inundated with floodwaters.

The tourist town of Siem Reap, the base for people visiting Angkor, has been inundated five times since August.

Sixty thousand families have received aid from the government and charitable organisations. The Cambodian government has given, or intends giving, US$500 to each of the families who have had someone killed during the disaster. 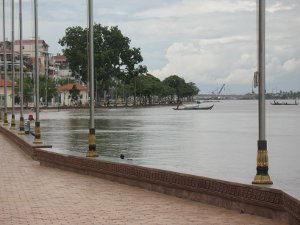 The Phnom Penh Post, the national English-language daily, reports that despite thousands of families facing chronic food shortages for the next year due to the loss of their rice crops, as many as 79,000 families in Prey Veng province alone, the government has yet to declare the worst flooding to hit the Kingdom in more than a decade to be a national emergency.

There is so much water that the Tonle Sap River is now flowing its usual course, north to south. During the wet season, the river’s flow is uniquely reversed as the levels of the Mekong river pushes the water in the Tonle Sap back 200-kilometres to fill the great lake in the country’s north, the largest freshwater reserve in Southeast Asia. Curiously, the river has changed direction several times, as the water goes north where the land is saturated, and then with nowhere to go has flowed south again.

The delicate beach at the bottom of the garden at the Cambodiana Hotel in Phnom Penh is threatened with extinction. The rows of sandbags are barely containing the water as the level of the river keeps rising. The white, plastic deck chairs look forlorn waiting to be consumed by the encroaching waters. The riverside gazebos are barely keeping above the rising water levels. 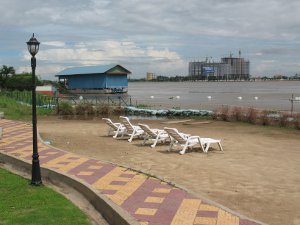 Along the riverside in Phnom Penh, the level of the river is now almost at street level and there’s talk that it may flood the city. Apparently, the river hasn’t been this high since 2000. The small river cruise vessels now sit so high in the water that their hulls are visible from the road and their passengers can see straight into the city. In the dry season, the top decks are barely visible. The main part of the city hasn’t flooded for decades, since before the Khmer Rouge years, though the northern outskirts of the capital have endured flooding problems in recent years.

Phnom Penh is flat, so once the river breaches the banks there’s no stopping the water. The city’s rainwater system, though much improved, will never cope with such vast quantities of excess water. Many of the city’s streets still flood regularly in a downpour, and before you know it you can be up to your ankles in dirty rainwater. 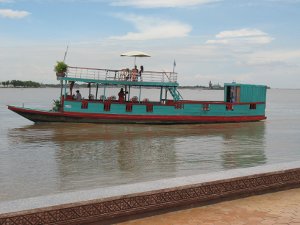 Four wheel drives, popular with Cambodians, come into their own. Drivers make little effort to slow down and their momentum causes mini waves to wash across roads sloshing up against the curbside.

Further north, the Mekong has been in the news for other reasons. Thirteen Chinese sailors have been killed by suspected drug traffickers who hijacked their ships. Recently, Chinese-registered cargo ships were seized by armed gangs near Chiang Ria in northern Thailand, near the so-called Golden Triangle, where the borders of Burma, Laos and Thailand meet, an area notorious for the production and trafficking of heroin and other illicit drugs.

Local authorities captured both boats after a gun battle with the hijackers and found cargo that included amphetamines worth 100 million baht (about US3.2 million).

Newspaper reports cited Thai army officials as saying a gang run by the suspected drug trafficker Nor Kham was believed to be behind the attacks. The gang demands protection money from ships it hijacks on the Mekong and kills crew who refuse to co-operate. The boats are then used to smuggle drugs from Myanmar into Thailand.

Earlier this year in April, three Chinese boats and 34 crew were taken hostage by pirates along the Mekong in Myanmar but were rescued within days. The Chinese navy now dispatches gunboats to escort their national flagged vessels along the northern stretches of the river until they’re safe in Chinese waters. 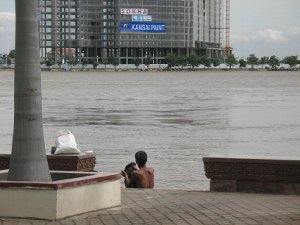 China is the equivalent of a riparian superpower. To fuel its economy, China is the world’s biggest builder of dams. It controls the headwaters of international rivers including the Mekong, and can manipulate cross-border flows to the largest number of countries in the world. Its dam building exploits have now shifted from domestic rivers, such as the Yangtze, to international rivers.

Worryingly for the smaller Southeast Asian states, China has given the cold shoulder to multilateral co-operation among the Mekong river basin countries. China is a dialogue partner but not a member of the Mekong River Commission which, according to some observers, underscores its intent not to abide by the Mekong basin community’s rules or adopt any legal obligations.

China does not have a single water treaty with any country, does not wish to share water, and seems determined to have its riparian cake and eat it too. Watch this space.

You can view images of the floods in Cambodia here:

And in Thailand here: