The Russian Market or Psar Toul Tom Poung (Psar is market in Khmer) is popular among tourists, expatriates and the local Cambodians. Don’t come if you’re expecting an air-conditioned surround with all the bells and whistles. It’s basic, hot like a sauna, and when it rains in Phnom Penh the floor floods. Moto riders delivering goods take their bikes straight in through the narrow access ways. The entrances are guarded by private security guards bearing AK-47s, who are not keen to have their photo taken. 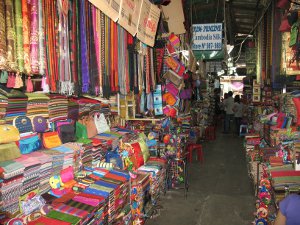 Rumour has it the name derives form the era of the Cold War, and the market sold a proliferation of Eastern Bloc items, others say a variation on the origin of the name was the weaponry available there, including the iconic Russian assault rifle, the Kalishnikov. Once upon a time, Cambodia was awash with weapons. Most are now barely seen, but the vast majority are out there, presumably hidden away.

The market is a rabbit warren of tight, narrow aisles, lined with stalls selling everything from fake watches to engine parts and pirated software and DVDs, and from artwork to t-shirts and sandals. I bought a coffee plunger and cutlery. Once, before heading to colder climes, I purchased a Carhartt jacket, which survived a Korean winter, for just $15. It’s not Sainsbury’s so if you want sanitised, stay at home.

The Russian Market is located a fair distance from other tourist sites n Phnom Penh, but local tuk-tuk drivers and motos will drop you off and the usual practice is to wait for you at a pre-arranged point outside, near one of the may side streets. 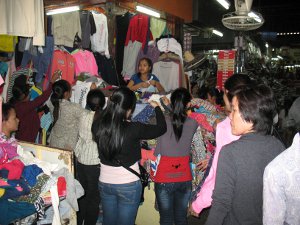 The market is nothing to look at from the outside. There are no signs and the only tell tale indicators are the crowds and the swarm of tuk-tuks. The building itself is a single-level row of stalls on the street frontage, covered in a patchwork collection of corrugated iron sheets. Every now and then sunlight breaks through the gaps in the roof illuminating the dark interior, which fluorescent tubes do their best to provide some light.

Until the late 1990s, the market openly sold illicit substances. In 1997 the authorities embarked on a marijuana crackdown. Stories recall the market was where old Khmer women openly sold ganga from 20 kilo burlap sacks. Apparently, the bulk of the action was mainly located in a small section of the market, where a handful of ladies had half-a-dozen sacks packed with the weed, in various strengths and qualities.

In the more central cafe area of the market (surrounded by the warren of stalls) cigarette vendors sold doobies from among the local brands like Angkors and Alain Delon, usually secured with a rubber band, for US1 per pack, which was 20-count. The latter makes me laugh, how many countries have cigarette brands named after a popular film star of the former colonial power?

The market takes up a whole block, but isn’t really a single building and has grown like a wild mushroom, whereby individual store holders piece together their own piece of real estate with sheets of corrugated iron, cut-rate cement, and hubris. The resulting mayhem however, has a semblance of order thanks to the Khmer tradition of grouping like businesses together. 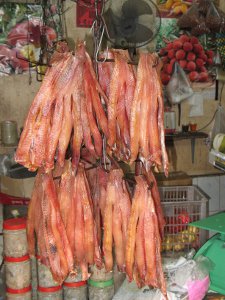 The market has evolved by merchandise; one corner is full of motorcycle parts, hardware and electrical accessories, one part is fruit (both imported and local), and another section contains meat, veggies and dried foods. There is a band of small fast food vendors through the centre. There are rows of the usual pirated clothes and shoes down another side, with a centre section full of cheap tailors. The southern corner has pirated music and movies, software, and tourist t-shirts. Another corner has carved paraphernalia and stoneware. Amongst all of these, you’ll also find practically everything else any tourist ro souvenir hunter wold want to ship home from Cambodia: crockery, lamps, handbags, silks, jewellery, photocopied books, Buddhist kitsch at prices cheaper almost than elsewhere in Asia.

As a food destination and much like the above photo, Russian Market is a mixed bag. Thanks to the low ceiling, the sauna-like heat is inescapable. Needless to say, the standard of fresh fruit and vegetables is passable if you arrive in the morning and slowly deteriorates the longer the day goes on.

For fresh meat and seafood, the produce is by-and-large not of the same quality as the larger Central Market. Very little is kept on ice, and the smell can be a challenge even for devoted carnivores. You’ll occasionally be able to cut a bargain for some seafood, simply because the demand isn’t as high at the Russian Market as it is elsewhere

If you’re vegetarian or easily overwhelmed by the smell of fermented and dried aquatic life, then your best advised to avoid this part of the market.

The central area of fast food stalls appears to be the only section with a common roof, now stained jet black from years of cooking oil smoke, some of dubious quality, and charcoal fires. If you accept Western standards of hygiene as a benchmark, this looks especially grim, and unlikely to tempt the palate. Adventurous food connoisseurs claim there are a handful of great Khmer meals to be had here that are hard to find in Phnom Penh’s restaurants.

The area around the market is increasingly popular living with foreigners. Prices aren’t necessarily cheaper than closer to the Riverside, but apartments are generally much larger. For about US$450 per month, a two-bedroom, two-bathroom apartment with a huge living space can be had. Anyone living in this area would need to have transport, preferably their own, or face forking out for tuk-tuks to get anywhere. A round trip from the Riverside to the market will set you back about US$5 and take about 15 minutes each way.

A trip to the Russian Market affords sights of the capital not on the usual tourist routes. The market may be a bit of an endurance test, with its heat and cramped conditions, but it can be far more interesting than most shopping centres.

The Russian Market, is located at the corner of Street 155 and Street 444, Phnom Penh, and is open daily from 7am-5pm.

#1 Ross Dunstan 2012-01-22 04:28
Living a 3 minute walk away from the market for the past 6 years, I'd basically agree with what is written. The rent quoted though I would challenge. I live in a 2 bedroom, 1 bathroom apartment with a decent living area and pay $150 a month plus utilities.
Quote
Refresh comments list