Near the Walkabout Bar, located off Street 51 is The Pub. The sign outside says “Great Food, Cheap Beer”. Draught beer is $1 on account of it being the low season. In fact, I was the only customer. The Khmer woman behind the bar poured my brew as I studied the décor; white washed walls, high ceiling and dark stained timber, a step up from the inside of some other establishments in this area of Phnom Penh, known for its bars. 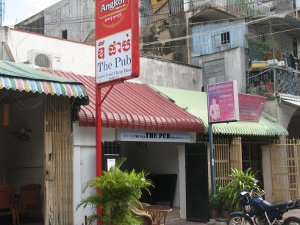 Once upon a time the central police station was the next block down, but that didn’t discourage acts of random gun violence in the street, including one incident that saw the nearby Heart of Darkness night club closed for six months. The Walkabout is full of taxi-girls and pudgy expats casting furtive glances about the place. The décor resembles a railway station toilet or police holding cell, and is probably best not viewed under a strong light, dim and grungy does it.

By comparison The Pub is a breath of fresh air, and I like the décor. Near the door are movie posters of Michael Caine in Get Carter, and Ray Winstone, poolside in yellow trunks from Sexy Beast.

“Great film” I said, “one of my favourite actors”. The slightly built European behind the bar agreed. He had the face of a smoker, a skin of leather with deep lines. He said his name was Garry. We exchanged a running commentary on the film and others of the same genre. “My theme bar” he said casting his eyes along the walls “British gangster flicks”.

I suspect Garry wouldn’t be out of place in a gangster flick and judging by his Cockney accent would fit right in, most sentences were rounded off with that great suffix of London-speak “[Do you] know what I mean?” which is delivered more as a statement than intending to elicit any response.

“Ben Kingsley was great, a complete psychopath, know what I mean,”  said Garry.

The film, I know, is set mainly in Spain where the main character Gel (Winstone), is a retired London villain living in self-imposed exile in a villa overlooking the Mediterranean with his wife, Didi, an ex-porn actress. Their secluded bliss is disturbed by the arrival of the unbalanced Don Logan (Kingsley) an event foreshadowed at the film’s beginning by a giant boulder that crashes down from the hill above, smashing into the couple’s swimming pool.

Gel’s wanted back in London for a special job, a robbery, and Logan’s been sent by the godfather of London’s underworld, Teddy Bass, to secure his cooperation, only Gel’s not keen, and violence ensues.

The film’s opening scene is played out to the sound of the Stranglers ‘Peaches’ with its distinctive bass beat.

“It’s not about the money with me and you is it Gel it’s the charge, it’s the bolt, it’s the buzz, it’s the sheer fuck-off-en-ness of it all, am I right?” Says Don in a rant to Gel in one scene. Afterwards Gel flies reluctantly to London to do the job but Don never returns from Spain. Teddy suspects Gel’s done him in and questions Gel as to Don’s whereabouts. He’s not a bloke to be trivalled with is Teddy, and just to prove it shoots a man dead in cold blood with Gel the only witness.

After the robbery is over, Teddy asks a dejected Gel how much he was promised for the job. Gel replies that no one really said.

“Well I’m going to give you a tenner but I’ve only got a twenty, you got change?” Gel’s forced to cough up 10 pounds before Teddy drives off leaving Gel relieved but alive.

“Good job he pocketed those diamonds then” said Garry “Know what I mean?”

Yeah, I did. I looked the menu. Aside from cottage pie and some other Western dishes, there was Shawarma Chicken. Unsure what this was I asked. “It’s marinated chicken” said Garry, “only I ain’t done the marinating yet” and laughed.

While we were on the subject of gangsters, I told Garry about a friend of mine in New Zealand, an East End Jew, whose family had emigrated from the Ukraine. His name is Greene, as “Immigration were doing colours that week.” His father worked a barber earning minimum wage but every Tuesday a package would be delivered and stored under the stairs. On Thursday, someone else would come and collect the package, and assuming the package wasn’t opened and no questions were asked, his father received the equivalent of a week’s wages to keep quiet. This was the time of the Krays, so nobody ever asked much about anything. 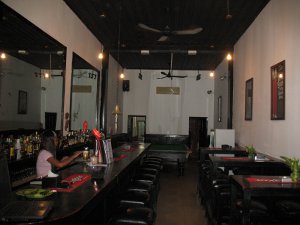 “I was born about 150 yards from the Krays’ pub” said Garry. “My brother was a cheeky bugger when he was young. One night he stole a guard dog, can you believe that, stole it! So he’s walking home with the thing and who comes along but Reggie Kray. So my brother asks Reggie if he wants a dog, and Reggie says no ‘cause he’s already got one at home. So my brother says is that Ronnie? And do you know what, Reggie laughs and gives him a fiver.”

Garry explained his brother was only 11 at the time, but if he’d been any older, or bigger, Reggie probably would’ve near killed him for a remark like that.

I asked Garry what the biggest impediment to doing business was in Phnom Penh.

“The police” he said, no doubt remarking on the local constabulary’s reputation for seeking protection money. A recent article in the Cambodia Daily remarked on the numbers of police, serving or who have left the force, who had been involved in recent murders in Phnom Penh. This included the recent shooting in broad daylight of a money lender, an event captured on CCTV and later posted on You Tube. The victim, a woman, had gone with her two sons to a city market with over $30,000 to change carried in a steel box. After the transaction three men on two motorcycles beat them to the ground and began to make off with the cash box. Only the woman recovered and gave chase before one of the men produced a pistol at shot her point blank in the chest. What was most startling was that while the woman lay bleeding mortally wounded on the street, not a soul came to her assistance. The crowd of witnesses just stood and stared. One of the men was arrested several days later, and turned out to be an ex-police officer.

This incident was quickly followed by another, the shooting of a man outside a night club following a brawl that go out of hand, by off-duty police officers. The officers concerned were moonlighting as bouncers, as many do in order to earn extra money.

Before coming to Phnom Penh, Garry had lived in Sihanoukville on the Costa del Cambodia, and before that in Thailand.

Once upon a time he’d worked in Spain, selling luxury cars to rich Arabs, and had made a packet. This was back in days of the likes of Adnan Khashoggi, the Saudi arms dealer once considered the world’s richest man, and whose yacht was so large the port of Marbella couldn’t accommodate it. All weekend helicopters would fly guests in to Khashoggi’s luxury hilltop villa behind Marbella.

Marbella was full of the jet set according to Garry. “We’d sell these guys cars and then a few weeks later buy them back when they’d finished, and then resell them on again for more than we paid to buy them back.”

We laughed when I recalled the name of the former Saudi oil minister, Sheikh Yemani, which could be pronounced as “Sheikh Your Money”.

Presumably, it was the Marbella money that had kept Garry afloat in Asia all these years. Running a bar in Asia’s tourist spots can be hard work, and as far as making living, very hit-and-miss. Some bars thrive and stay, others fall by the wayside. Ownership changes hands as regularly as the bar names and the staff.

The price of a beer at happy hour wouldn’t provide a bar with any income, which only comes with the food and full prices on drinks, and assuming you have enough regular customers and walk-by trade to keep going.

Even bigger bars like Sharkys, a Phnom Penh institution that has a crowd in most nights, struggles in the low season, that’s why it’s got a handful of owners and even some of them are trying to cash-up by selling off portions of their interests.

David from Humberside works as a manager at Sharkys upstairs on Street 132. He says he couldn’t go back to Hull. He has a child to a younger Khmer woman and says they couldn’t adjust to life back home. He’s been back for one visit in the last few years and is in no hurry to return.

He laughed when I told him I’d been to the Hull Cheese Bar in his home town where all the League players go with their wags, or to find one. “It’s still there” said David, “It’s changed but it’s still there.”

But he won’t be going back, and neither I suspect, will Garry.

#1 Guest 2014-05-09 19:17
Useful info. Fortunate me I discovered your site unintentionally , and I am shocked why this accident didn't happened in advance!
I bookmarked it.
Quote
Refresh comments list