Hotel Le Royal is located hotel is located at 92 Rukhak Vithei Daun Penh, a wide boulevard near Sangkat Wat Phnom, from which the city derives its name. Formerly, the street was known as the Avenue Joffre, and sat in the heart of the French Quarter. It’s certainly one of the capital’s smartest addresses, adjacent the former National Library now closed, and opposite the imposing US Embassy, looking like a caramel wedding cake, almost garish by comparison and surrounded by the inevitable security.

The hotel is a stunning piece of architecture and symbol of opulence, as impressive from the outside as it is on the inside. 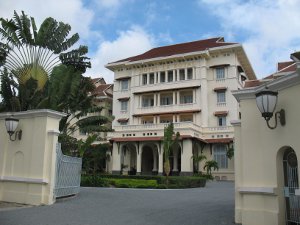 In late 1923 and early 1924, the construction of a 55-room hotel in Phnom Penh was proposed, with Ernest Hébrard as architect. As visionary planner, he was in part responsible for turning a small, Cambodian-French colonial city into a bustling well-planned metropolis with its wide boulevards, many of which were once canals.

The proposal also contained plans for similar hotels in Siem Reap and the ancient city of Hue.

Hotel Le Royal was opened in 1929 by the then King of Cambodia, Sisowath Monivong, complete with a lavish buffet and an orchestra shipped in from Saigon just for the occasion.

In its early heyday the hotel enjoyed an international clientele comprising globetrotters and adventurers, writers and journalists, royalty and dignitaries. 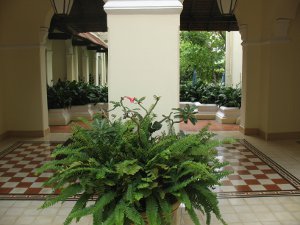 One of the hotel’s distinctive features are the Personality Suites named after Jacqueline Kennedy, Somerset Maugham, Charles de Gaulle and André Malraux. The suites contain prized memorabilia and original artefacts of the famous occupants, but  the rooms aren’t always larger or smarter.

Malraux, a distinguished author and later a politician in the De Gaulle administration arrived in Cambodia as a 23-year-old and travelled to Angkor. When he returned to France he hit the headlines when he was arrested by French Customs for having looted base reliefs from one of ancient city’s many temples.

Downstairs display cases near the ground floor gift shops hold other mementoes of the visits of Malraux and Jaqueline Kennedy. Curiously enough, the two had met at the unveiling of the Mona Lisa at the Washington National Gallery, when Malraux was French Minister of Culture, and Kennedy the First Lady.

Kennedy’s visits came in 1967 at the height of America’s Vietnam War, when she played the part of a US roving ambassador at a time when the US and Cambodia had no diplomatic relations. Cambodia's then Head-of-State, Prince Sihanouk, held a banquet in her honour at which a special blood red cocktail named the Femme Fatale was served. The prince played some of his own jazz compilations and the guests drank from cocktail glasses especially cut for the occasion. Years later after civil war and the Khmer Rouge, the glasses were found intact in the hotel’s basement.

As well as being famed for its Personality Suites the hotel has five distinctive restaurants and bars, Restaurant Le Royal, Le Phnom Deli, Café Monivong, another the Writers Bar, is in fact in the lobby by the front desk, and the famous Elephant Bar. 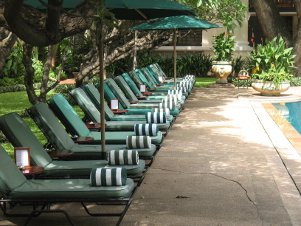 Happy Hour is from 4-8pm in the Elephant Bar and is popular with expats. It’s touted as “Phnom Penh’s most famous and historical bar” and where you can still order a Femme Fatale or just about any other beverage and there’s live music from Monday through Saturday. The bar has a balcony opening out to the sweeping front entrance, a piano and emerald green pool table, and looks like a throw-back to colonial-era opulence.

A latte will set you back five dollars, more than most Cambodians make in a day. From the Café Monivong you can sit out on the terrace overlooking one of the pools, in a timeless world much removed from present day life in the capital.

White-shirted pool attendants in matching shorts laid out green and white towels on rows of green-cushioned deck chairs, before placing white a frangipani flower inserted into each towel roll.

The twin pools, separated by a covered walkway from the main reception area to the rear wing, are like an inner sanctum of peace, tranquillity and luxury. The only noise was made by groundsmen cutting dead branches from the tropical ferns.

An older couple sat in the swimming gear reading novels while the staff shuffled about their duties, invisible. 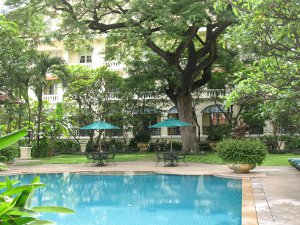 Clean cut European guests, business types in slacks and collared short-sleeve shirts carrying laptops were ushered into and out of the hotel by the front desk staff in cream linen suits, the doorman wore a traditional ornamental hat. Two younger looking backpacker types walked down the corridor and out onto the wide forecourt.

The hotel has survived, and has done so in style.

Between 1970 and 1975 most journalists working in Phnom Penh and covering Cambodia’s rapidly escalating civil war and descent in chaos stayed there. Part of the film The Killing Fields was set in the hotel, though the film itself was shot in Thailand. It featured in the film as the last refuge for foreign journalists before the Khmer Rouge forced all French nationals into the French Embassy.

Across the wide boulevard is the Lycee Rene Descartes, where the French had sent their children for schooling. It is still French-owned. Next door was the site of the Cercle Sportif, where the French relaxed and swam in the large pool. Following the fall of Phnom Penh in April 1975, the Khmer Rouge killed the former prime ministers of the deposed Lon Nol regime, Sisawath Sirik Matak and Long Boret, along with hundreds of government officials and military officers. A decade ago the site was demolished to make way for the new US Embassy

During the Khmer Rouge years the hotel stayed open and guests of the regime were accommodated there, yes, even Pol Pot had visitors. After a lull following the ousting of the Khmer Rouge by the Vietnamese, the hotel fell into disrepair. Cambodia was again racked by civil war and luxury hotels were low on the list of priorities in reconstruction. Besides, foreign investment is usually light on the ground when the bullets are flying

In 1997, following the UN-sponsored elections, Raffles reopened the refurbished property having added three wings to form a courtyard around gardens with the two swimming pools, palms and monkey pod trees. Ceilings are high, floors are polished black-and-white tile or marble, the stairway restored teak and furnishings mostly Art Deco reproductions. The food is fantastic and the staff friendly.

It started out life as Hotel Le Royal, and seems determined to carry on it the same inimitable style.