The ruins of the French hill station at Bokor Mountain have been called “the eeriest place on Earth” by one travel writer. Semi-deserted, shrouded in mist, open to the wind from all directions, chilly, and ravaged by time and the residue of warfare with the walls pockmarked by bullet holes, and the landscape contaminated by unexploded ordnance – eerie if not dangerous, is certainly an apt description.

Originally, the town was built in the early 1900s as a resort by the French to offer an escape from the heat, humidity and the locals of Phnom Penh. To construct the road and buildings of the Bokor hilltop community, the French used forced prison labour, and costing over 900 Cambodians their lives in the nine months spent constructing the resort in this remote mountain location. 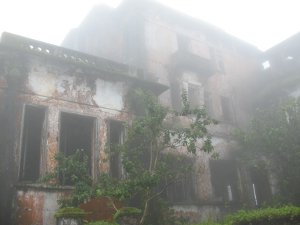 A hotel opened in 1925, named the Bokor Palace Hotel and with a casino, church, school, post office, royal residence and houses were serviced by a 200-strong population. Here, the wealth French would hold lavish parties – something akin to the English in Kenya’s Rift Valley – and the Chinese would gamble. Those who lost it is rumoured, would jump off the casino garden terrace at the edge of the cliff after having lost their loot.

Bokor Mountain is now part of Preah Monivong National Park, and the former buildings are ghostly ruins. In recent times the go ahead has been granted to a long-term project to re-establish Bokor as a major tourist destination. Progress on the work can best be described as slow. Construction of the road has been going on for years. Great swathes of hillside and forest has been cut away in the process, which grinds on with heavy equipment and Cambodian labour equipped with hard hats in some instances, and the mainstay of safety footwear in Third World Asia, the flip flop.

In New Zealand-speak Bokor Mountain is barely more than a hill at 1200 metres but it gets cold, misty and wet. The locals talk about “touching the clouds” but then Cambodia is largely a flat country created over 5,000 years by the silt of the mighty Mekong River, and the country’s hills such as they are, were originally islands.

Throughout the year it is possible to arrange tours to the top with the Bokor Rangers.

Tours are best organised through the many tour operators or hotels and guest houses in nearby Kampot. Prices are fairly standard at around US$25 but you can save a dollar or two shopping around. 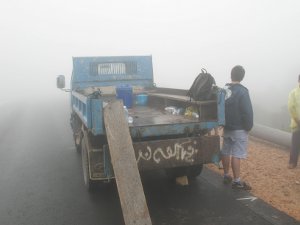 The tours include transport, lunch, entrance fee to the Preah Monivong National Park, and a sunset river cruise. Currently tourists are not allowed on the mountain on their own, so you can forget about renting a motorbike and taking the 34-kilometre mountain trip yourself. Be warned there is usually some trekking involved, but tour guides give you the option of bailing and waiting at the meeting point further up the mountain for the climbers to arrive.

The trouble with tour parties is that you invariably move at the pace of the slowest members. Our tour party set off in one minivan to the ranger station at the bottom of the mountain road outside Kampot, where, after 20 minutes or so, another van arrived.

Our transport for the day was a small flat bed truck with the addition of bench seats and the spare tyre for comfort. After a few minutes I was glad to get off. Take one of those disposable plastic rain coats for protection, the sort you can buy at any roadside stall for about 50 cents, and if you have any, warm clothes.

Exposed on the back of an open crowded truck, an umbrella is of little use but take one just in case, because there are plenty of stops. Getting wet isn’t usually a problem in itself, but getting cold is, and it’s always better to have water proofing and not need it, than to need it, and not have it.

We alighted about half-way up the mountain road, where a ranger was awaiting us up one of the many stepped spillways cut into the hillsides. Our guide for the day brought up the rear, and off we went into the dense Cambodian jungle of the Elephant Mountains.

The national park is apparently home to a great deal of wildlife including tigers, elephants, gibbons and rare birds. Presumably there are snakes aplenty too, but the only wildlife we encountered were the sounds of birds high up in the forest canopy and leeches, which attached themselves to anyone wearing socks and in some cases, embedded themselves into the soles of footwear. 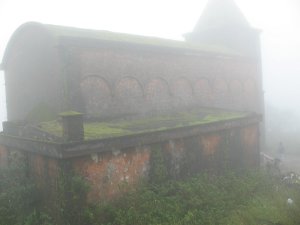 Though it was damp I quickly started sweating as we climbed up along a narrow path. Our ranger was dressed in light green shirt and matching trousers anda peaked cap, and carried a small half-full water bottle and a plastic rain coat. He wore flip flops and out of his back pocket I spied a sling-shot, so presumably he wasn’t expecting to meet any tigers. During the entire hour-and-a-half trek he never so much as broke a sweat.

Following up the rear of the party were a young German couple who, prior to setting out for Asia, had obviously spent time at the Camel Outdoor shop getting themselves equipped from head-to-toe in matching his and hers trekking clothes. Though the guide following along behind did his best to hurry them along, they insisted on stopping at every species of plant and demanding to know what they were called.

While the entire rest of the group waited on the road, our sweat rapidly cooling, the Germans strolled merrily along at their own pace, informing the guide that if they were to be hurried they would make a complaint.

The rest of the 20-odd strong party comprised Italians, French, two Cambodians, British, and three Australians, two Melbournians who talked incessantly all day, their voices carrying through the forest and eventually later, through the fog-bound mountain top as a kind of homing beacon for all and sundry, so there was little chance of getting lost.

In a year or two work on the road will be complete, and tour companies will lose their monopoly on transport to the summit. Work on the road however, has been incredibly slow, and labour-intensive. It’s a large project financed, as I understand, by the Koreans, who are also developing a new hotel complex at the summit to replace the original French colonial era construction, which remains largely in ruins. 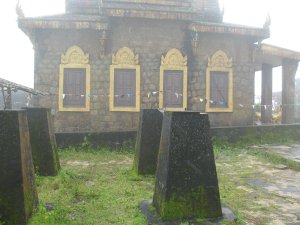 The Cambodian workers toiling away in what for them must seem like weather from another world live in the most basic accommodation near their worksites. Temporary shacks made of plastic tarpaulins, branches cut from the forest and where possible, and walls made of corrugated iron, barely enough to keep you dry, let alone warm.

To get a sense of the misty mountain try Matt Dillon’s 2002 directorial debut City of Ghosts starring James Caan, France’s hardest working actor Gerard Depardieu and Matt himself.  The film purports to be the first Western feature to film principally in Cambodia since an adaptation of Joseph Conrad’s novel Lord Jim starring Peter O’Toole in 1964.  The hilarious karaoke scene featuring Caan’s tone-deaf rendition was filmed in a Kampot night club.

One of the film’s most enduring scenes takes place in a fog-blanketed minefield with the old casino as a backdrop.  Bokor Station was also extensively used as a setting in the 2004 Korean horror film R-Point so there is some symmetry that it is now the Koreans who are redeveloping the site as a tourist destination.

The French abandoned Bokor Hill in late 1940s, during their Indochina War largely because of local insurrections led by the Khmer Issarak, the anti-French Khmer nationalists, and then for good in 1972, as the Khmer Rouge took control of the area. Following the Vietnamese invasion of Cambodia in 1979, the Khmer Rouge entrenched themselves and held on tightly for months. In earlier 1990s Bokor Hill was still one of the last strongholds of Khmer Rouge. 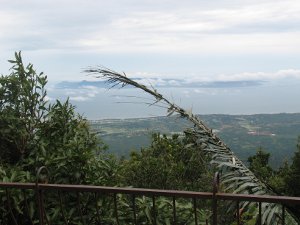 The old casino is an eerie sight appearing briefly through the mist and then just as quickly, disappearing again. Some of the windows are bricked up, and the exterior is braced with steel scaffolding, though to what end is unclear.

A five-minute walk down the road is the abandoned Catholic Church, an equally ghostly sight until there appeared a group of Cambodian children from inside the main chapel. One of the Cambodian tourists asked why they weren’t at school and they replied hat this was because they were on holiday. Some of the party took photos of the children before handing out 1000 riel notes (25 US cents) to the small group.

At the temple site on Bokor the concrete artillery foundations to hold a 125-mm howitzer and laid by the local Khmer Rouge leader are still visible, as the ridge line gave a panoramic view out over the water towards Phu Quoc Island. It is rumoured hat Vietnamese fishermen who strayed too close to Democratic Kampuchea were captured and decapitated by the local Khmer Rouge forces.

Once the hotel complex is complete Kampot locals fear for the impact it will have upon their livelihoods. It is Kampot that relies on tourists using the town as the base for visiting the National Park, but once facilities exist on the mountain itself, many guests will bypass the town altogether.

A ten-minute drive down the road is the Black Palace, a small collection of buildings used by Cambodian kings to while away their time enjoying the views out over the sea. These days the buildings are mere concrete skeletons, but home to the workers constructing the large Buddha going up on the hill above the new road.

Fear not, the good folk of Kampot may have Mother Nature on their side. For eight months of the year the mountain is damp, cloudy, and windswept. The spectacular views on offer are literally out of sight. During winter and the wet season, you could walk past the Eiffel Tower on the summit and not see it.

Other nearby attractions include: the Tek Chhou Zoo eight kilometres from Kampot; runs to the Ha Tien Vegas International Resort at the nearby Vietnam border; the 176-hectare eco-tourism site at Prek Tnaut, 30-kilometres west of Kampot; Kep National Park; visits to the numerous pepper farms plus dive sites and boating; and the numerous caves surrounding Kep one of which, Phnom Ch’nork, has pre-Angkorian ruins set within limestone and dating back to the 6th-century ancient state of Funan.